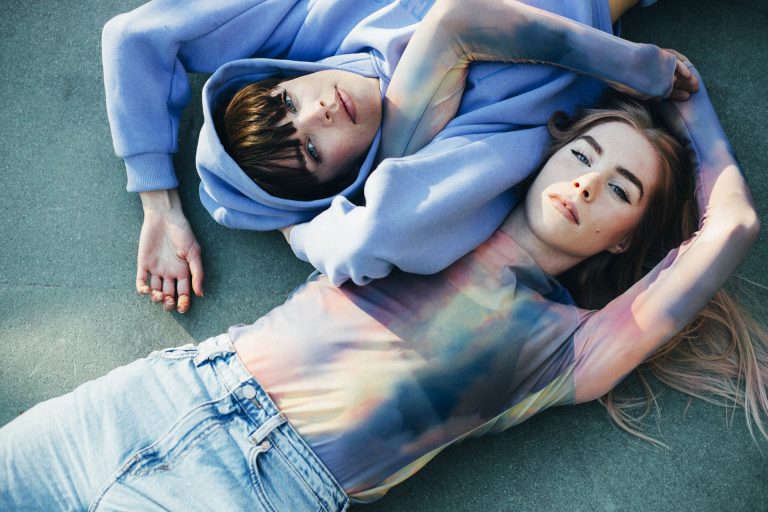 Holding together years of friendship and becoming hit stars of Sweden, both Nea and Shy Martin have finally collaborated on a track that wasn’t even meant for them. In the end, ‘No Regrets’ is the perfect bop to all endings of summer.

Both hailing from small villages in the Swedish countryside, attending the same music school and working together behind the scenes of producing and writing for many years. Nea and Shy Martin now find themselves within a friendship rarely regarded but warming to see.

With each of them creating a path of their own successes. From picking credits with Zara Larsson, Kygo and Bebe Rexha to amassing over million streams. The powerful artists now define the sphere of Swedish pop as they push through the new generation of music.

Lucky for some, we caught up with both artists about their latest single, professionalism vs friendship and what the future holds.

Being long-time friends and working as songwriters for many years, how did you two meets, and what made you work together?

N: Me and Shy Martin met about seven years ago at a song writing school called Musikmakarna (“music makers”) up north in Sweden. She was in the year under me, and after graduating, we both moved to Stockholm and ended up working and hanging in the same klick of people. She is such a great songwriter and person, so it was obvious I wanted to try to write music together.

S: Me and Nea met a few years ago at a music school in northern Sweden (Musikmakarna). Nea was my senior, and I remember being a fan of her from day one. The first time we worked together was in Stockholm during my internship at the company where she was published at the time. Since then, we’ve continued working together over the years when we’ve been in Sweden at the same time!

Congratulations on your latest single, ‘No Regrets’ – can you talk us through the creative process and themes you delved into?

N: We wrote the song together with our amazing producer/writer friend Victor Thell, and it was just one of those days when the process was so easy and fun. The theme is about taking control over your own life and leaving stuff behind you that’s not good for you. If you make mistakes, at least it should be your own mess and not somebody else’s – no regrets!

S: The process was very quick and easy, and I think we had the first demo down by lunch. The song has a simple theme – being in charge of your decisions and owning your mistakes without any regrets. I think that’s an ambition most people strive to achieve.

Admittedly the song wasn’t meant for you two, but you kept it as your own. What made ‘No Regrets’ so special compared to others?

N: Yes, that’s right, when we wrote it, we didn’t have a specific artist in mind but just let the music and the vibe take us where it wanted. We started sending it out for other artists, but quickly, both me and Sara realized we loved it too much to give it away though. Also, it felt like such a fun idea to put out a song together!

S: I couldn’t stop listening to the demo of the song after leaving the studio, which is usually a good sign for me that I feel connected with a song. Me and Nea had been talking about releasing a song together for some time and quickly decided this was the song, since we wrote it together and both loved it.

In the future, would you ever release a joint project or another track?

N: Ooo, I haven’t thought about it tbh, but if we write another song we love, and the timing is right for both of us, who knows.

S: It’s always a joy working with Nea, and this release and everything around it, from taking the photos to shooting the video, it has been super fun. So, if we end up writing another song we both love, I would def be open to it!

As you continue to be long-time friends and work together, how do you find the balance between best friends to professionals?

N: Actually, the studio has become the place where we hang out the most. It’s the love for music that brought us together, so it feels very natural to write and hang out at the same time.

S: As Nea wrote, it was the love for music that brought us together in the first place. But since we both have been travelling a lot over the last years, we have often passed each other. It really feels like we’ve had the opportunity to get to know each other even more during this year when we’ve been in the same place and time zone.

Both raised in Sweden, attending the same music school together and now hit stars (sounds like you are inseparable) – how did both of your careers start, and what has been your highest achievement so far?

N: Yes, we do have a lot in common! We are both also brought up in small cities and one of 4 siblings! But I was born in South Africa, so that bit is different. For me, I’ve just always been singing and writing little melodies, I still remember songs I wrote as a 6-7 yr old kid. As a teenager, I started writing pop songs, and eventually, I moved to Stockholm to try my luck on music. It took me many years of hustling to eventually get signed, but when I finally did, I feel like it went pretty fast to find my place in the music industry.

My biggest achievement as a songwriter must be co-writing Zara Larsson’s Lush Life (that actually reached a billion streams two days ago!) and as an artist, releasing my debut single ‘Some Say’ and getting such a beautiful welcoming as an artist, is a highlight!

S: Haha yes, we’ve realized we actually have a lot more in common than we knew about, from family to mindset and career.

I’ve been singing and creating melodies for as long as I can remember. When I was 12, I started playing in a band with some friends, and since then I’ve been writing songs. When I was 17, I signed to EMI Sweden for a few years but never released any music. During my time at Musikmakarna (the music school both me and Nea studied at), I wrote ‘The ocean – mike perry’ together with my longtime collaborator Nirob Islam after recording the vocals in my wardrobe. A week after, we wrote ‘All we know – the chainsmokers’ on my parent’s couch, and suddenly we worked as full-time songwriters. Writing those songs and watching them grow was definitely some of the best moments of my career so far.

Finally, what is next for both of you?

N: I plan to use the next six months or so to focus on writing music for a bigger body of work, an EP or even a debut album! I’m also going to LA for all of November to write music there, and hopefully London too.

S: I’m going to be spending most of my time this year in Sweden working on my debut album. I hope I’ll be able to do some shorter writing trips to the UK as well.