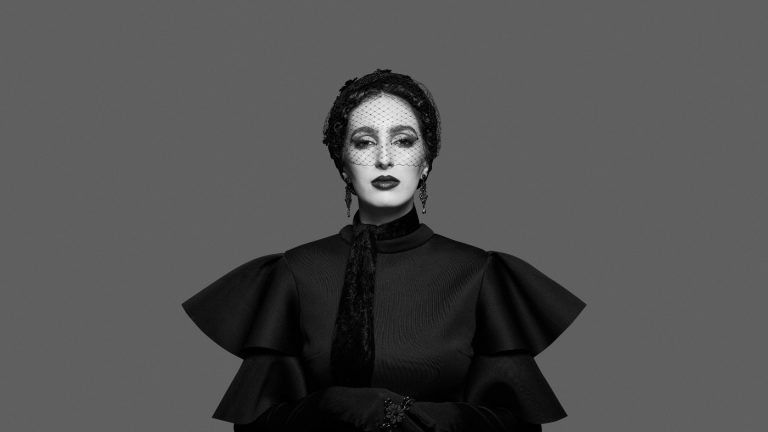 ‘Heavy’ is the debut single from British-Moroccan artist, ELATRASI. The song is a powerful, cinematic ballad that displays the artists wonderous vocal capability. Equally evocative as it is beautifully constructed, ELATRASI uses her voice to uplift those who may sometimes feel invisible, as she describes herself: “The track touches upon the concept that just because we seem to have it all together, it doesn’t mean that we aren’t struggling beneath the surface. We are all going through invisible battles and, unless we mention it, no one would ever know.” Presiding over a piano – which she taught herself as a child – the artist writes incredibly personal lyrics built upon honest experiences, that are both touching and gripping.

Much of what we hear on ‘Heavy’ has been shaped by ELATRASI’s life experience. A genuine love for music has also acted as a form of escape and self-healing, meaning everything she makes comes from the heart. “I hold a deep admiration and connection to cinematic orchestral soundscapes. Ever since I was young and self-taught piano renditions of my favourite film scores from the age of eight, I’ve been fascinated with the way soundtracks in motion pictures tell a story, a feeling, an experience.” The artist explains, “It’s completely soul healing for me. Through my original orchestral pop composition and songwriting, I have found a genuine channel of visibility. Every song is a journal that captures chapters of my healing process with chronic pain, resilience, internal peace and acceptance. It comes from my core.”

Sonically, ELATRASI is heavily influenced by her North African-Arab heritage, with her sounds rooted in anthemic ‘chamber-pop’. Arabic-infused sounds work perfectly alongside the emotionally inducing piano. There’s certainly a uniqueness to the artists sound that you’re unlikely to hear anywhere else. Although ELATRASI has taken much inspiration from her heritage, it also came with a few challenges, notably a lack of encouragement to follow her dreams. Despite this, ‘Heavy’ proves that she’s a force to be reckoned with. “Being a North African Arab female artist who is visibly Muslim, songwriting and music composition is not the most encouraged or conventional dream.” The artist proclaims, “It takes courage to choose not to fit in a box or standard that is expected of you, but it is in my nature to challenge and explore the unexpected if it feels authentic and could potentially bring value to people’s lives. My debut single ‘Heavy’ begins with celebrating my Moroccan roots with subtle Arabic sounds – from working with Italian-Palestinian producer Imad Salhi, all the way to the production [vintage Arabic violins in the post-chorus] and vocal techniques. I thoroughly enjoy infusing the sounds of my heritage with my love for dramatic, ethereal and cinematic pop. My lyricism touches upon vulnerable, sensitive and often ignored subjects that I hope will touch, connect and root for those who are experiencing heavier days – a gentle reminder to the listener that they are heard, seen and never alone.”ELATRASI is an artist with boundless potential. A self-taught pianist, songwriter and aspiring composer, proving that anything she puts her mind to, she masters, which is an exceptional skill. Above all, in the face of adversity, ELATRASI shows the world that if you channel any form of negativity into a positive force for change, you create something beautiful. ‘Heavy’ is a stunning debut that leaves us pining for more and it sets the tone of what to expect from this artist in the future.