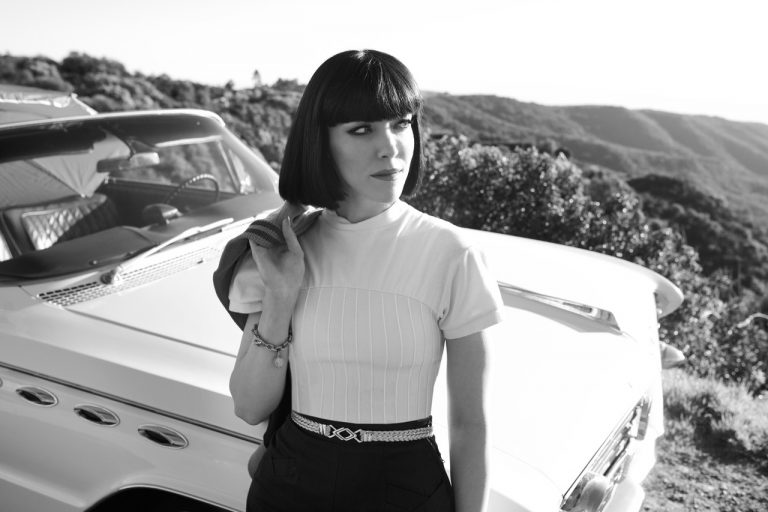 New EP ‘Grateful’ debuts original music, as LeGrow, focuses on the joyful simplicity of human connection and the gratitude it brings. Getting through the longest lockdown in the world, the singer finds a new appreciation for life. The singer describes her musical journey as ‘circuitous’ but seems as she found her place after all.

Previous singles ‘Feel Alright’ and ‘Evan’ introduce the new era for Elise LeGrow. While navigating through the hurdles of feeling isolated, she practiced the act of gratitude and has written some of her best work yet. A new single, ‘Better Side,’ talks about appreciating the little things and cherishing the randomness of human connection.

Following up on LeGrow’s 2018 project ‘Playing Chess,’ her musical direction did a 180. On top of releasing original music, ‘Grateful’ also offers a new modern sound with new sampled drums, synths, and vocal effects.

My new album just came out so it’s been very busy. I’ve spent a lot of time and energy planning and producing social media content. But I was very lucky to get to do some of that work from abroad – I visited Amsterdam, London and Berlin for some songwriting collabs and meetings with my label reps.

Are you excited for ‘Grateful’ to be out?

Yes – incredibly. And the response so far has been amazing. In the first four days we’ve had over a half million streams on Spotify!

How did you get into music?

My mum says that I was two years old when I started singing and that I was obsessed with the American classic, “Take Me Out To The Ball Game”. Apparently I belted it out constantly when she took me for walks in my stroller! Of course my tastes have evolved since then. My grandfather was a jazz musician, as is my uncle to this day and I’ve loved jazz ever since I discovered Ella Fitzgerald as a teenager. But I spent much of my childhood binging on ’90s pop radio and my mother’s old rock, soul and R&B records. I think you hear all of those influences on ‘Grateful’.

Do you remember what was the first song you wrote about?

I don’t remember! I started writing in my teens but the songs were so bad that I later destroyed all the evidence and repressed the memories. As I recall they were all angsty self-pity bullshit songs. Thankfully, I’ve come a long way since then!

How would you describe your sound and how did you find it?

Soulful Pop. My musical journey has been circuitous—and my sound has elements from all the places I’ve been. Some of my songs lean more pop or R&B, others more rock’n’roll. They’re all pretty soulful.

What inspires your songwriting?

Inspiration comes from all angles. Sometimes a melody or lyric will come to me just as I am falling asleep, and I sing it hoarse and half-conscious into my phone, as was the case for “Drinking in the Day”. Other times the song will be born from a midday conversation about where I’m at, which is what led to “Grateful”.

How would you compare your 2018 project ‘Playing Chess’ to ‘Grateful’?

My first album featured songs from the Chess Records catalogue, none of which I composed, so ‘Grateful’ is radically different in that these are my stories and my melodies. The productions are also a lot more modern, featuring sampled drums, synths and vocal effects that I haven’t played with in the past.

How did you deal with everything regarding the pandemic? What was your situation?

I was very lucky to be insulated from the worst of the pandemic. I stayed healthy, as did my friends and family, and we were lucky to be vaccinated when so many people worldwide still don’t have access. Still, I did complain my fair share. Our province, Ontario had the longest lockdown in the world and I started to feel like a prisoner in my city – I really missed travelling!

What was the driving force behind putting together a whole album around being kind and grateful?

There are other themes on the album like romantic love, friendship, grief and loss. But I chose to call the album “Grateful” because out of everything I wrote about, the theme of gratitude resonated most with me. I suffer from depression and anxiety, but gratitude has helped me stave off the lowest lows, especially through the pandemic.

How would you describe ‘Grateful’?

This song has special significance to me. When we wrote “Grateful” in February 2020, it was a continuation of the story in “Evan”. Losing my friend made me value my own life in a new way. But the song’s meaning evolved further when the pandemic struck. In the vocal booth I sang those words over and over, and I was forced to reflect on the little pleasures that were keeping me going, and the friends and family who have shown me so much love and generosity.

Could you elaborate on the backstory of ‘Better Side’?

January days in Toronto are short and cold (sometimes -30 degrees) and it’s easy to feel isolated. Everyone is bundled up in scarves and coats and rushing to get where they’re going. I was pretty miserable this one afternoon when I exchanged glances with a kind stranger on the rush hour subway, and he smiled at me, and it really made an impact. It wasn’t a romantic thing. Just a human connection. That’s all. And I instantly felt better, which was shocking! It sounds cheesy I know. But it’s true.

Do you have a favourite lyric out of the album?

I think my favourite line is “No one knows ’til tomorrow comes. Even fortune tellers sometimes get it wrong.” I like that it questions our human obsession with controlling future events, despite its futility. These days I’m working on being more present through mindfulness meditation.

Are you working on anything at the moment?

Yes! Always! Working with Vintage Culture on our song, “It Is What It Is” opened my eyes to new creative possibilities, and I have a big announcement coming soon about another club-ready collaboration!

Are you planning to go on tour?

I can’t wait to get back on the road! I love performing live with my band and I miss it so much! Things have been especially slow to get going again here in Canada, but there are tour announcements in UK and Europe coming soon!