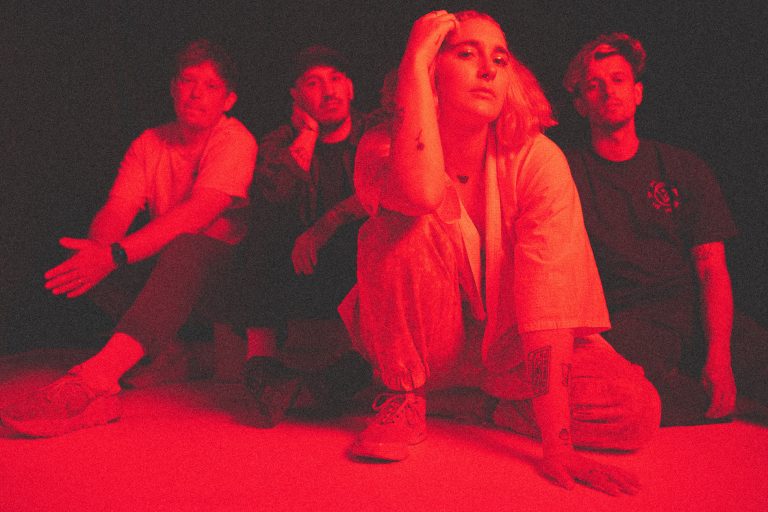 Brighton indie-pop foursome Fickle Friends taps into a musical overthinking spiral with a new album ‘Are We Gonna Be Alright?’. It’s a very appropriate contemplation on a Blue Monday, the world’s renowned most depressing day of the year.

Fickle Friends recently fully embraced the freedom of existence and musical creativity. Bouncing off the extreme pressure of their debut album ‘You Are Someone Else,’ the band stopped caring what they were meant to sound like and unleashed a new experimental personality to the nine-year-long saga of Fickle Friends.

‘Are We Gonna Be Alright’ along with the current single ‘Yeah Yeah Yeah,’ Fickle Friends introduce a fresh perspective on making music featuring playful melodies and dark guitar sounds. As a euphoria-pursuing indie-pop band, they maintain the lightness of bedroom-pop feel but with a sprinkle of self-doubt and lack of purpose baggage.

Currently, on tour, outside of the dark, uncertain pandemic bubble Fickle Friends present their discography in a city near you. Make sure you rehearse all the ‘Are We Gonna Be Alright?’ lyrics so you can sing along and leave your soul on the dancefloor.

Who are Fickle Friends?

We are Natti, Jack, Harry and Sam. Or in FF land…Bat, Valb, Ski and Trish.

Could you share with us the story of how the band was formed?

I (Natti) moved to Brighton for uni and knew I was going to start a band IMMEDIATELY. I already knew Sam from being at LIPA (Liverpool Institute of Performing Arts), Jack was in my songwriting class (we bonded after being coupled up for a Christmas singing assignment where we sang Wham’s Last Christmas), and Harry (who came onboard a little later) was Jack’s high school friend. I remember when we were looking for a new bassist Jack was like..”oh my mate is keen”, and Harry came in, already knew half the songs and absolutely slayed. The rest is history.

What is the meaning behind your stage name?

You’re gonna hate me, I can’t remember why it came about…except for the fact I stole it from a friend. I had just started playing my original songs and auditioned for an end of term gig…panicked because I didn’t wanna use my name…and wrote Fickle Friends. It just stuck.

What song of yours best describes your personality as a band?

Your music is very atmospheric and cinematic, if your music could be played in a movie, what would be the movie of choice?

What was the main intention when working on your debut album ‘You Are Someone Else’?

This will sound dumb…obviously we wanted to make an amazing album…but I remember wanting to please everyone. The fans, the label etc. we were so conscious of doing something wrong or not in keeping with our “sound”. It definitely wasn’t a natural process. But we were under a lot of major label pressure which we totally weren’t ready for. That being said, we are super proud of YASE and I love going back and listening to it because it reminds me of some wicked times.

How would you say your debut album differs/compares to the music you’re working on at the moment?

I think we have come a long way as songwriters since Album 1. With first records, it tends to be all the songs you have written since inception up until that point. So with YASE we had songs spanning 5 years. It was a lot of old and new all thrown together.

The stuff we are working on now is more intelligent…it knows what it is if that makes sense. I also think we are way more adventurous with our music now…as soon as we stopped caring about sounding like FF we had the freedom to try anything.

How would you describe the ‘Weird Years’ EP era?

Exactly that…weird. I think it was a coming of age era too…the bridge between album 1 and album 2 where we figured out who we are and who we wanna be 🙂

It’s amazing to hear Fickle Friends explore the heavier side of their music, could you talk us through the writing process of ‘Yeah Yeah Yeah’?

I think we’d been listening to a lot of Bring Me. I really can’t remember why we decided to write a heavy song that day…it might have been an accident. I remember Jack had this guitar riff and I had an idea for a lyric that talked about shouting in the gran canyon. The rest just flowed.

How did you manage to get out of the ‘funk’ of feeling stuck as a band?

When we get stuck we collaborate. Bringing fresh ideas and more people into the mix always kicks us out of a funk. Also knowing when to take a break is super important…we have learned that the hard way but now relish a break from FF world. It means we can come back fighting.

Were there any artists you looked up to in this time of darkness?

Coldplay kept us going for a while. There was a solid few weeks where we would start the day blasting Higher Power through the studio speakers haha. The Laura Mvula record Pink Noise was also a big part of keeping us sane in that time. There are plenty more both those two especially stand out.

What did you want to express with the ‘Yeah Yeah Yeah’ music video?

The song is about feeling like you’re going insane through lack of purpose and confidence in yourself. So with the video we wanted to make it feel like freedom, running around the city without a plan, hanging out the window of a car, throwing caution to the wind to feel something other than monotony.

What could we expect from your upcoming live shows?

Oh man they’re going to be fun. We have an awesome show lined up…perfect mix of album 1 and 2 and some bits in between. We are going to bring a lot of energy and love to this tour.

What are some themes you’re diving into in your new album ‘Are We Gonna Be Alright’?