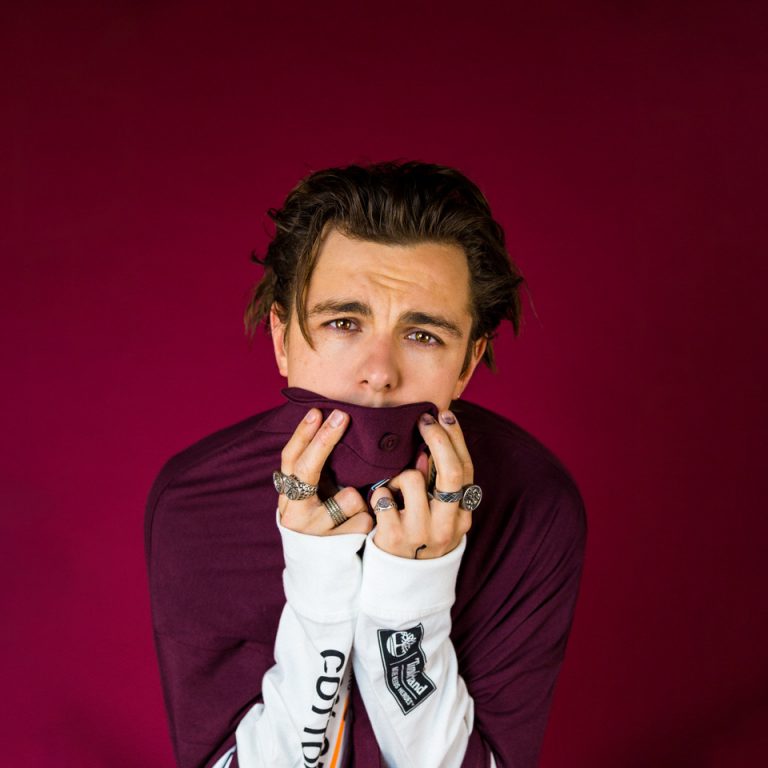 Rising UK pop artist KiD RAiN ended last year on a high note with the release of most recent singles, ‘Magic’ and ‘Sole Of Your Shoe.‘ Following up on the breakthrough success of his take on ‘Accidentally In Love,’ Kid RAiN is taking the UK pop scene by storm.

Ten years in the making, KiD RAiN looks back at a boy in his DC shoes and a dramatic belt that once dreamt of being where he is today. As much as the feedback for ‘Accidentally In Love’ came unexpected, RAiN embraces the TikTok wagon and now connects with his fans worldwide.

Throughout our chat, KiD RAiN lives up to his witty personality and shares an insight into his humble beginnings that escalated into building his own studio and learning everything there is to know about production.

The punky beats, disco-tined rhythms, and funk-fuelled bass of ‘Magic’ showcase RAiN’s playful persona alongside the romantic backstory he elaborates on below.

Today is a good day, I had a Greggs sausage roll for breakfast, wrote a great song, now I’m in the pub, what more could you ask for?

What have you been listening to in the last couple of weeks?

My life consists of writing, producing and mixing my songs. So as much as I love listening to new music, 95% of the time I’m listening to mix 62 of my latest song 😂 That being said I’m loving Sody at the moment, and LANYs new album.

When and how did you first get into music and songwriting, producing?

11 year old me, with my DC shoes and HUUUGE belt buckle started a band with my friends at school, and my writing and producing has literally evolved from there. From having no clue what I’m doing to now, over 10 years later, only having a slight clue what I’m doing. I built my own studio when I left school and taught myself the rest, it’s amazing what you can learn on the internet hey?

Who/what helped you the most when starting out?

I think being around the right people really helps, if you surround yourself with people with bad habits then it’s likely you’ll pick up those habits. I was lucky enough to be in studios with great writers and producers from a young age and learnt so much about the craft of songwriting/producing. It’s also really important to remember that it’s all about having a good time, you can hear it in the music if you’re having a good time.

Why did you decide to cover ‘Accidentally In Love’?

It was a complete “accident” (see what I did there). I did a movie cover mashup on my TikTok with loads of movie songs all in one, and within 24 hours there were thousands of people asking for a full cover of Accidentally In Love, all from a 3 second clip! I debated releasing a full version at first, as it was so different to my previous music, but I’m SO glad I did it!!

Did you expect at all how it blew up ?

No no no no, I honestly couldn’t believe it. Watching the numbers on my Spotify was amazing. It just goes to show the power of TikTok combined with the power of a song that connects with your audience.

How is your relationship with TikTok?

It’s something I’ve become a lot better with this year. It’s very easy to let it overwhelm you and get you down if a video you spent a lot of time on doesn’t do well, that’s how it was for me at the start of this year. But it’s important to not overthink it, just put out content that you like, and that you think is good, and if it does well.. great! If not, no worries just on to the next one.

What was it about ‘Magic’ that made you go ‘yes this is the one’?

Everything about the song I love, the pop melodies, the production, the SLAPPING BASS, the CRAZY synth solo at the end. I knew I loved it,  and when my friends all loved it too, I knew I had to release it!

What is the track about?

The song is about a girl (shock). Haha the night before a writing session I went on a walk with a friend of mine in London, and as I was walking her home she held my hand (this sounds real cringe as I write it haha) and I got goosebumps over my entire body. I got into my Uber home and opened my voicenotes app on my phone and wrote “it must be magic, when you put your hands on me I can’t explain it” and when I went into the session the next day, I already had most of the chorus done!

How was the arena tour with The Vamps? How was it performing in front of so many people?

You can’t really put into words what that feels like. It’s really easy to let it fly by and not live in the moment, but it was completely electric. From the second that tour finished I told myself I would do everything I could to get back on arena stages again.

Are you working on any bigger projects at the moment?

Right now it’s all about the new music, I’m writing every single day and planning the next set of songs. Every new song is getting nether each time and I’m having so much fun with it. I’m also planning my next set of shows and will make sure every person who has been supporting my gets to see these songs live!! Headline show in Alaska anyone?!?