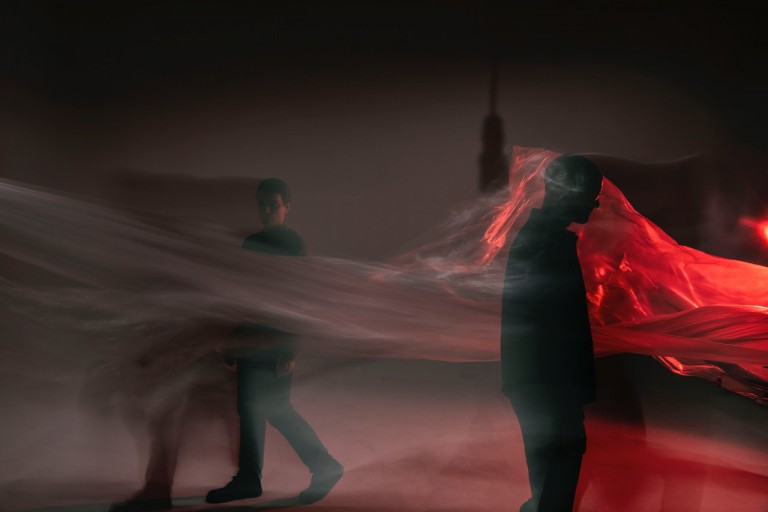 Anticipating Fyfe and Iskra Strings’ brand new collaborative album, ‘Interiority,’ one can’t help but wonder at the incredible artistic direction and chemistry between the two artists. Both seasoned musicians, singer-songwriter Fyfe and violinist Iskra Strings released two self-titled EPs that were bundled together in 2019’s ‘Extended Play’ edition, and have now returned in full force to unveil a whole new, incredible project.

While ‘Interiority’ explores deeply intimate soundscapes and sonic pallets,  its guest lineup is quite the opposite of modest, with the likes of Ghostpoet, Rae Morris, Aquilo, Kelly Lee Owens, and Mysie making exciting appearances throughout the album’s 18 tracks. ‘Interiority’ sees things come full circle for Fyfe and Iskra Strings, who met 20 years ago in the London suburb of Acton after Iskra Strings was hired to give Fyfe violin lessons.

Gearing up for the release of ‘Interiority,’ we spoke to Fyfe and Iskra Strings about the story and meaning behind the album, their collaborative process and their impressive work within the music industry.

How did ‘Interiority’ come about? How did you guys decide to work on a second project together?

The main motivation behind embarking on a second project together was that we had a lot of fun making the first.

What is the meaning and story behind the project?

‘Interiority’ was mainly written during the height of the pandemic and lockdown. Whilst we both had our own personal struggles and challenges we wanted to create a musical space full of wonder and possibilities. We were also influenced by Douglas Coupland’s 90s novel ‘Microserfs’ which is about technology and the search for community and meaning.

What was the collaborative process between you two when you were writing and producing the album? Did it differ in any way from ‘Extended Play?’

Our previous project ‘Extended Play’ is a collection of two EPs. On this project we were very much wanting to create a coherent album which takes the listener on a journey. Most of the album was created in the same room. Perhaps one of us might have had a good starting point idea. The track ‘Night Sky’ was written remotely during lockdown. Interestingly it is one of our most hopeful sounding tracks, yet it was written during one of our darker moments.

‘Interiority’ features a lot of collaborations in comparison to your last album, ‘Extended Play.’ How did you decide to bring so many more talented musicians on board this time?

On the first project we came to realise the power of collaboration. We have quite different approaches to music making. Paul (Fyfe) is a songwriter and producer and I approach music as an instrumentalist and as someone grounded in the classical tradition. This combination took us to some interesting creative places. We were excited to see where other artists would take our music.

Which song on the album was your absolute favourite one to make?

It’s impossible for me to pick a favourite track. ‘Origami’ was the first track written for the album and so was an exciting moment when we realised that our collaboration had a future. The track started as a classical string idea but quickly evolved into something else. Paul put some of my string parts through some effects which make them sound like synths. He then created the beat and the bass part which transformed the track. The end section features my piano playing. We were absolutely delighted when we received Rae Morris’ vocal part. The whole process felt very joyful.

Do you have any plans of working on another project together?

At the moment we are concentrating on promoting the album. However, we are both keen to continue to collaborate with different artists.

You are both very experienced musicians and industry professionals. What is one thing you love and one thing you hate about the music industry?

I love working with other musicians and feel very privileged to have worked with so many incredible artists. The sense of connection with others when creating together is truly special.

I’ve been fortunate to work with so many fantastic people in the industry who are passionate about music. However, there’s always a tension between art and commerce. The worry of wondering if your music is going to connect with an audience. There’s lots of highs and lows. The important thing is to make sure that there are moments to have fun and to celebrate the wins.

What can fans and listeners expect in promotion of the album? Are you set to embark on tour or perform the project at any festivals?

We would like to develop a live show. We’re quite keen to try to do something a bit different in presenting this project. It’s a difficult album to perform live. Watch this space.