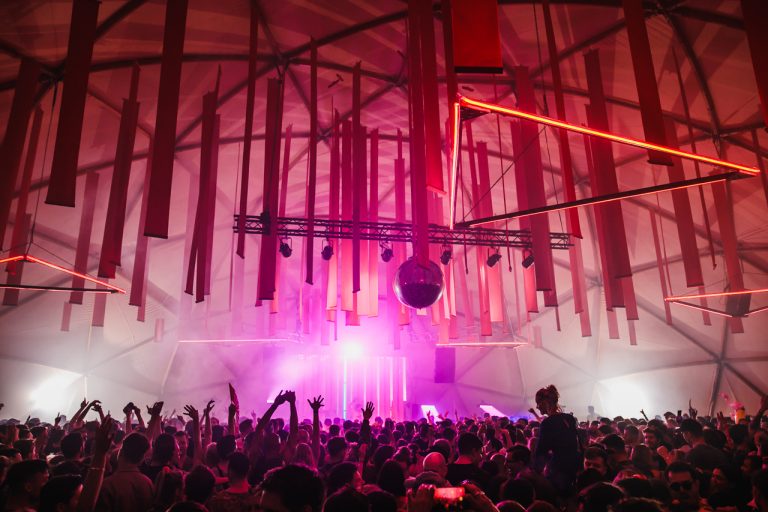 The final bank holiday weekend of May saw Gala Festival return to Peckham Rye park for its fourth edition. Facing tough competition from the commercial powerhouse that is All Points East, Gala curated a line-up that consisted of some of the finest selectors in house and disco, resulting in the festival selling out almost two months in advance. The bill featured legendary names in the Disco world such as Chez Damier and Horse Meat Disco alongside fast rising stars like Raw Silk and Dan Shake. Organisers stated themselves that they built the line-up around the festivals reputation of being well grounded and “away from flash in the pan niches”, curating the biggest edition of Gala to date in the process.

Based in a corner of Peckham Rye park, four stages played host to the day’s events. Giles Peterson’s Worldwide FM played host to its own stage which featured most live acts across the day. Palms Trax curated his own stage, funkily named “Cooking with Palms Trax”, this area hosted exciting emerging talent like Sassy J and Beautiful Swimmers. The biggest stage was of course the main stage which saw Honey Dijon close out the day’s events with her unique blend of Chicago house and disco. The most exciting stage however, was the pleasure dome. A giant tent in the shape of a dome played host to some of the best DJ’s of the day, the sound quality was incredible and throughout the day it was dominated by pink neon lighting, you never wanted to leave.

One of the early highlights of the day was Dan Shake over on the main stage, playing a mix of his personal house meets techno productions and his more disco DJ style. It was the perfect feel good warm up set before the big names took to the helm. Following Dan was Midland over at the Pleasure Dome. Having been a household name in the dance industry for several years now, with Midland you know that over the course of that hour and a half, the songs will be unpredictable, incredibly well mixed and just loads of fun.

Over at the Worldwide FM stage Auntie Flo played an hour-long live set consisting of his most recent album Radio Highlife and pieces from his latest production Kabsa. The artist has become known for his exotic worldly taste that translates along his own productions and DJ sets. Here he bought the vibrant sounds of Africa to South London.

Following Midland in the pleasure dome was Gerd Janson. The ever humble and modest selector delivered the best set of the day. Song selection was vast, ranging from Peggy Gou’s latest release, starry night to the nineties classic, spin me round by Dead or Alive, the energy never dropped. As always with Gerd there wasn’t any theatrics going on behind the decks just the highest quality music selection and mixing your likely to hear from any DJ. The only question to ask left to ask after his set was – why wasn’t he closing out the festival? It really was that good.

Closing out the Pleasure Dome was Horse Meat Disco. Having played in each of the last three events, the trio behind the alias are now a key part of the festivals core programme and represent the inclusiveness that Gala stands for. The group delivered exactly what there known for; a nostalgia filled Disco set filled with feel good fun moments.

Palms Trax closed out his own stage with a three-hour set, the longest of the day, which displayed the DJs versatility as he flowed freely between genres. Palms delved in and out of the harder side of dance music and featured some rare techno ensembles on a day that was largely dominated by house and disco.

Honey Dijon rounded off proceedings at the main stage to an outrageous crowd encore. Her energetic blend of Chicago House has been heard across the globe thanks to her infamous boiler room set. Here was no different, layering vocal samples over euphoric beats, Honey drove the crowd forward with each song., The pace was relentless, and it was the exact energy that was needed to close out what had been a great day of music.

Thanks to a remarkable 2018 edition, Gala became an unmissable occasion. With heightened expectations comes further pressure to move forward however the event seemed to almost revel at such thoughts. The festival stuck to its modest routes, there wasn’t any frills and unnecessary additions, they simply curated a line-up that seamlessly flowed between artists and put a focus on sound production. This approach led to a day that focused on the main attraction, the music and the atmosphere followed exactly that.

With future aims of expanding the festival to two days this year’s edition will have done this aim the world of good. A key trait the event has managed to achieve is gaining the respect and admiration of artists who return year on year, this proves that many things are being done to the highest extent. Gala is a festival South London can be proud of, having lost Field Day and many other festivals that made the South the epicentre of day festivals, Gala showed what it still had to offer.