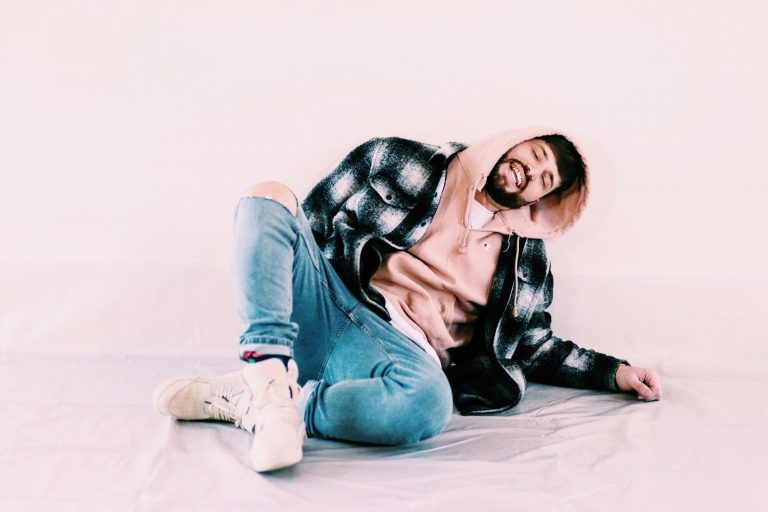 News’ just in. Dua Lipa and GASHI, some of the most prominent music names to come out of Kosovo dance Shota at the Sunny Hill Festival. Surrounded by fans chanting along with them; Lipa wearing the Albanian flag and GASHI bowing down to her. Together they celebrate their home country with a performance of the traditional dance from Kosovo, Shota.

In regards to a release of GASHI’s newest single ‘Safety,’ the Kosovo Albanian answers questions for Noctis in a very refreshing fashion. His responses exhibit his playful personality that is certain of his abilities and ambitions. GASHI stays humble while taking over the world.

Labinot “Larry” Gashi was born in Libya to Albanian parents where his love for Albania comes from. Before immigrating to the United States, GASHI with his parents moved around Europe and settled down in Germany for some time. Expecting a heartfelt answer to how his journey has been prior to moving to US, GASHI shares a memory of his first encounter with snow: “I was in Germany and I saw snow for the first time. I saw and ran outside to touch it because it looked like ice cream. As I was running,g I got hit by a car”, not what you expected, am I right? GASHI is punchy like that. Straight to the point, not leaving anyone bored and not entertained.

The legendary moonwalk, the glittery white gloves and dance moves that got the whole world hooked are what made Michael Jackson the rightful King of Pop. They are also responsible for GASHI’s relentless determination to entertain and perform. GASHI said, ‘it was from the moment he saw Michael Jackson on television when he knew he wanted to pursue this career.’

During the Sunny Hill Festival in Prishtina, Kosovo, GASHI showed off his dance moves alongside Dua Lipa. He shares he owes his rhythm to the exposure of different cultures while traveling from country to country. “I’m cultured, I have rhythm, unlike other people I actually can dance on beat,” GASHI cheekily explains.

It was his single ‘Disrespectful’ that put GSHI on a map and put him on a journey towards global success. “I use to look at price tags… now I don’t… and I’m way more humble and quiet”, quietly taking over the world.

The studio sessions are not what you would expect from this boldly confident Kosovo Albanian artist. There is no way anyone would dare to call GASHI a diva as it is only the essentials that he requires: “It’s me, my friends and a lot of fun. Candles water cookies and a lot of water”, he reveals.

To unlock an artist’s soul, you will need a key. The key usually symbolizes the inspiration behind their work. GASHI chose a different approach and had me cracking up at his answers. His response as to what is the backstory to some of his biggest hits is priceless:

Get Out – “was a cool feature I did with a new young artist. It’s about hitting and getting out”

Don’t worry. It gets better. Going through GASHI’s library of music videos, there was an instant interest in the behind-the-scenes. GASHI delivers: “When we did ‘My Year G-Eazy face was next to a girls ass. He got pink eye and had to perform at Jimmy Fallon with it”, admitting it does not get more awkward than this.

One of his more recent collaborations is the one with DJ Snake for his new album on ‘Paris.’ For the track, GASHI builds on the overwhelmingly blessed experience: “DJ Snake flew me out to Paris to perform my first show, and I came up with the idea. I said to myself I can’t believe I woke up in Paris. It’s the greatest song I ever made”.

Stream GASHI’s new single ‘Safety’ and watch him take over the world.