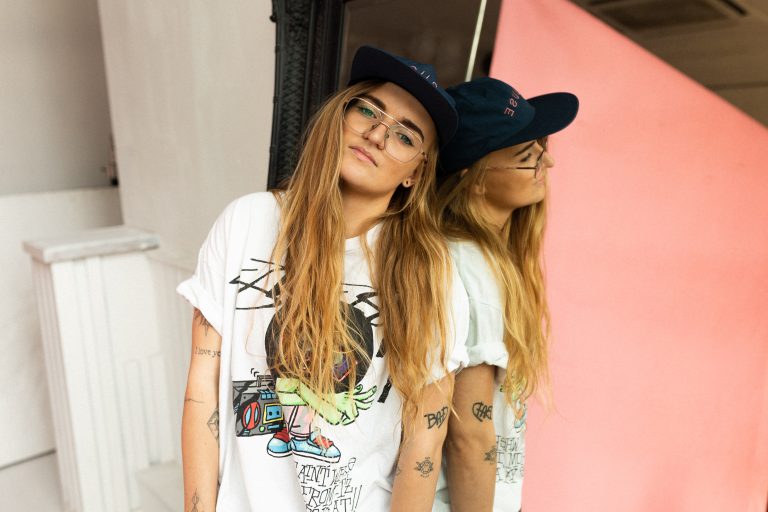 I’m not exaggerating when describing Georgia “G Flip” Flipo as the modern-day Travis Barker. This 25-year-old Melbourne-based multi-instrumentalist, singer/songwriter handles a drum kit as no one else we’ve seen in a long time. Flipo’s natural talent and obsession with drums drove her to experiment with her voice. From singing behind her drum set, we fast forward to the release week of Flipo’s debut album ‘About Us’ out on August 30th.

As I now listen to G Flip’s work, especially to ‘Bring Me Home’ that is dripping in emotion with her crisp voice, I realise, Flipo was never meant to be just one thing. Drums, guitar, singing, she was built for all of these instruments. Her love for playing music has been nurtured since an early age: “I got into playing music at age 9 when I was gifted my first drum kit as a gift from my uncle. Prior to that, I had always been fascinated with music. I had a toy acoustic guitar and even a toy electric guitar that I use to pretend to play around the house as an infant. My dad would also thrash music constantly as I was growing up,” Flipo remembers.

After seriously mastering and perfecting her drumming skills, Flipo quietly observed, but moved towards her dream to be more than just a drummer. She shares more about the transition to a solo musician: “It was pretty easy actually. I spent so much time traveling the world sitting on that drum throne, so the stage was a comfy place for me. Then I started doing backing vocals behind the kit which got me more confident at singing. Sitting at the back I got to observe what the players in front of me where doing and I was taking notes for if I was ever to pursue this solo dream I had in my head.”

“You should totally go solo G,” advised by Flipo’s family and friends. However, the core of her inspiration is: “My drum teacher Jenny Rose Morrish has been the biggest inspiration in my life. She taught me everything and inspired the hell of me as a kid,”, she reveals.

To release an album was something Flipo dreamt of her whole life. As much as it could have been forced, the process and story of ‘About Us’ was organic but perfectly timed at the same time. Flipo elaborates: “It sort of just happened. I was never trying to write an album. I was just writing and producing as many songs as I could with a dream that I might find a team that supports my vision one day. Majority of the songs were written before anyone knew me when I was holed up and heartbroken in my bedroom. When it came to picking songs for the album, it was pretty easy. They were all in a pile of songs waiting there. My on and off relationship inspires a lot of my writing, so that’s just how it went”.

She continues: “There was never meant to be any intentional theme. When I came to picking the album order of the tracks, I realized, oh wow every song is about my partner and me. So I ended putting all the songs in order of how our relationship unfolded. But that was never intentional”.

‘About Us’ features songs carrying an emotion that has the power to motivate you, lift you up, make you stop and think twice. Tracks like ‘Drink Too Much,’ ‘I Am Not Afraid’ and my personal favorite ‘Bring Me Home’ do have engaging melodies, but the lyrics take you deep through Flipo’s relationship. Words like ‘I pick myself up from the fucking floor’ may have been challenging to expand on, but quite the contrary for talented and vulnerable Flipo. “There was never a hard moment on this album. Majority of these songs were written before anyone knew me, so I had less stress and more free time to just be alone and create”.

With the help of other female artists, G Flip contributes to redefining the meaning of a popstar. Her success and perseverance is something to celebrate along with the launch of her debut album ‘About Us’ out on August 30th. “I am super psyched to be throwing an album launch party with my buddies, my family, and some fans. It’s the first chance I’ve gotten to properly celebrate a milestone or occasion since I released my first single ‘About You’ in February of last year. I really haven’t celebrated anything so far. It’s been pretty full-on since then. There hasn’t been a lot of time to do anything but work”, and we hope Flipo and her closest circle will sing along to ‘About Us’ all night long.

“I’m finishing the year with more shows. I’ve got a few festivals in Aus coming up: Triple J One Night Stand, Sound On Festival, Spilt Milk and Falls Festival which will see out the end of the year. I’m also psyched to be touring around Australia again in November”, Flipo recounts the schedule for following months.

There are only a few days left now on the countdown to the release of ‘About Us’. Make sure to pre-save G Flip’s debut album coming this Friday. G Flip is a relatable sensation in loading encapsulating emotions in a foreseen number one chart manner.  So don’t sleep on her.