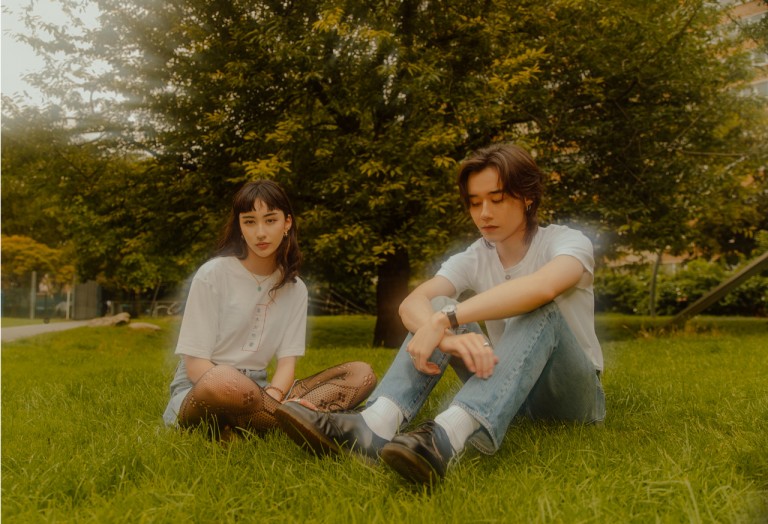 Get To Know Esme Emerson

“We realised that the music is always better when it’s been cared for by the both of us,” proclaims Emerson from British-Chinese sibling duo Esme Emerson. Instead of cruising through the isolating two years, Esme and Emerson concluded two minds are better than one and kicked off their conjoint efforts to create music.

Lockdown-born pairing elevated their already strong sibling bond into a deeper exploration of each other’s vulnerabilities, with their debut EP, ‘S for sugar, D for dog’ as the end product. Before Esme Emerson, they both shared a life-long passion for music that drove them to attend half-term rock schools, such as Punch Rock School in Ipswich.

Battling with imposter syndrome, Esme and Emerson had worked their way through and obtained a level of confidence to embark on their journey. ‘S for sugar, D for dog’ reflects them learning to be more vulnerable with each other with a title that holds family nostalgia.

Get to know Esme Emerson as a rising indie-pop duo discovering their songwriting capabilities while creating a melancholic bubble longing for home, whether it is a place or a person.

How are you doing today? Where are you at the moment?

Esme & Emerson: We’re good thanks! We’re just at our family home today, working on new music and enjoying the sunshine.

How did you initially get into music?

Esme & Emerson: Our parents have always been big on music, so listening to and being around music has always been quite a big part of our lives. During car journeys, we’d listen to our mum’s favourite tracks on repeat, singing the lyrics of songs before we were old enough to read them. We also got to attend gigs and festivals when we were younger, particularly the Latitude Festival, which was a great place to hear and experience new music. In terms of writing and performing, we both got into it quite young, about 9 or 10! We were fortunate enough to attend half-term ‘Rock Schools’ at a local studio in Ipswich called Punch Studios – we’d write, record and perform original songs over the course of a week. This introduced us to songwriting and we loved it. We wouldn’t be where we are today without those songs we wrote and the guidance we got from the folk at Punch Studios. That was our initial way in and we’ve been going ever since then.

When and how did you decide you wanted to pursue music as a duo??

Emerson: It was during the 2020 lockdown that we decided to give writing together a proper go. We’d been talking about it for years but never really found the time for it. Then, because of the lockdown, I had to come home from Uni to finish my degree and suddenly we found ourselves stuck in the house together and were fortunate to be in a position where we had the time to write. We realised that the music is always better when it’s been cared for by the both of us.

What are the biggest lessons you’ve learnt at Punch Rock School in Ipswich?

Emerson: Probably just to finish songs and to be confident in the songs you write. It’s funny, looking back, most of the songs we wrote weren’t great, but we performed them with confidence and were proud of whatever we came up with. It’s easy to get in your head about whether people will like what you’ve written, or whether it’s ‘good enough’ – you know, classic imposter syndrome stuff – but at those rock schools it was all about the process, and being able to enjoy the end product because of that! It’s something we try to carry with us today.

Esme: Confidence was the big thing for me. I remember going for the first time when I was nine, and being too afraid to sing anything. I stood there for ages, too nervous to make a noise while the guitarist looped the same four chords over and over again. Eventually, I let out a few ‘oo’s and aah’s’ and realised it wasn’t half as scary as I’d expected. In the end, I found it really fun.

Esme: Most of the time, Emerson writes and arranges an instrumental first. When he’s satisfied with it, I sit with it for a couple of days, working on vocal melodies and lyrics. There are other times when we write together with just an acoustic guitar or piano, and the song grows around that.

Emerson: We try to give each other our own separate space with a song before coming together to talk about it, that way we both are able to bring our own ideas to it without being too influenced by each other. I think, externally, it might seem like a strange way of doing things, but it really

works for us. It’s exciting to see how differently we see each song and how we can bring our different ideas into one piece.

What usually inspires your lyrics the most?

Esme: When writing songs, I tend to get inspiration from events/experiences that happen in my life, or from the books I read. From there, I focus on the feelings and emotions attached to the stories, and I pull lyrics from there.

I have two lyric books. One is full of scribbles and rough notes, the beginning stages of my lyrics. The other book is a lot neater, and I tend to jot ideas into it when they’re more thought out. I also add stickers, washi tape and little doodles into it for fun. Sometimes, writing lyrics this way feels like writing diary entries; It helps me keep the lyrics sincere and intimate.

Could you tell us the story of how you got discovered on TikTok?

Esme: During the first lockdown, I was scrolling on TikTok and came across a video of Adam Rom. He was singing, asking people to duet his video and sing with him, so I did. Adam reposted the TikTok duet I did on his Instagram, and the video got the attention of both Future Cut and Infinite Future Management, who both reached out to me via Instagram DMs.

Emerson: Future Cut then mentored us for about a year; we wrote 1-2 songs each week and sent it to them for feedback. It was a pretty intense process, but it’s helped us get to where we are today.

What are the main themes of your debut EP’S For Sugar, D For Dog’?

Emerson: S For Sugar, D For Dog is mostly about people, love and loss. I think these are things that come naturally to us when we write. But more broadly, as a project, this EP is about the two of us as we figure out how to write together. We’re siblings – so obviously, we’re close – but writing music together is a different experience and this EP feels like a reflection of us learning to be more vulnerable with each other.

How did you come up with the title?

Esme & Emerson: The EP title comes from a phrase our mum says. When people are asked to give their address, they often use the military alphabet. Our mum never bothers to use the code words for the letters in our address, so instead of saying “S for sierra, D for delta”, she says “S for sugar, D for dog”. That phrase has ended up being sort of nostalgic for us, reminding us of the family home we’ve grown up in. It’s also where we also wrote and recorded this EP, so it felt fitting.

Could you elaborate on the meaning of ‘Look Down/ Scared of Falling’?

Esme: This song is about escapism, about trying to flee reality and therefore avoid getting hurt. The lyric “I won’t look down” is about ignoring your own feelings, being too scared to confront them and hoping they’ll go away on their own. The following lyric “I’m too high above the ground” describes the risk of addressing these feelings, the fear that you might “fall down” and get hurt if you “look down” at them.

How was your pandemic experience? What kept you going through the endless lockdowns?

Emerson: The pandemic was rough for both of us, as it was for everyone. But we were very fortunate to have a space at home to write in. I think for me, songwriting became a form of escapism. The process of writing songs is something I fell in love with even more over the lockdowns so I kind of absorbed myself in that.

Esme: I picked up reading, something I hadn’t enjoyed since I was younger, but have now fallen back in love with. I spent a lot of lockdown reading. I mark pages and quotes that inspire me lyrically, referring back to them when writing songs.

How did it feel performing at your first official shows, including Omeara and Notting Hill Arts Club?

Esme: Performing live has been fun! Both in terms of the actual performance, and the process of figuring out our live set and our stage presence. I think every show we play is a little better than our last, as we get more comfortable and confident performing our set. It’s also been great to meet other artists and form genuine friendships with them; we’re really thankful to people like MIYA MIYA and Sleep Walking Animals for asking us to join them.

Emerson: When we play live, our good friend Matthew Owen tends to join us on stage – he’s actually my first ever friend I made when I was at nursery so it’s been so fun to reconnect over music. He’s been kind enough to lend his skills to us and I think his playing is a really special part of our live show.