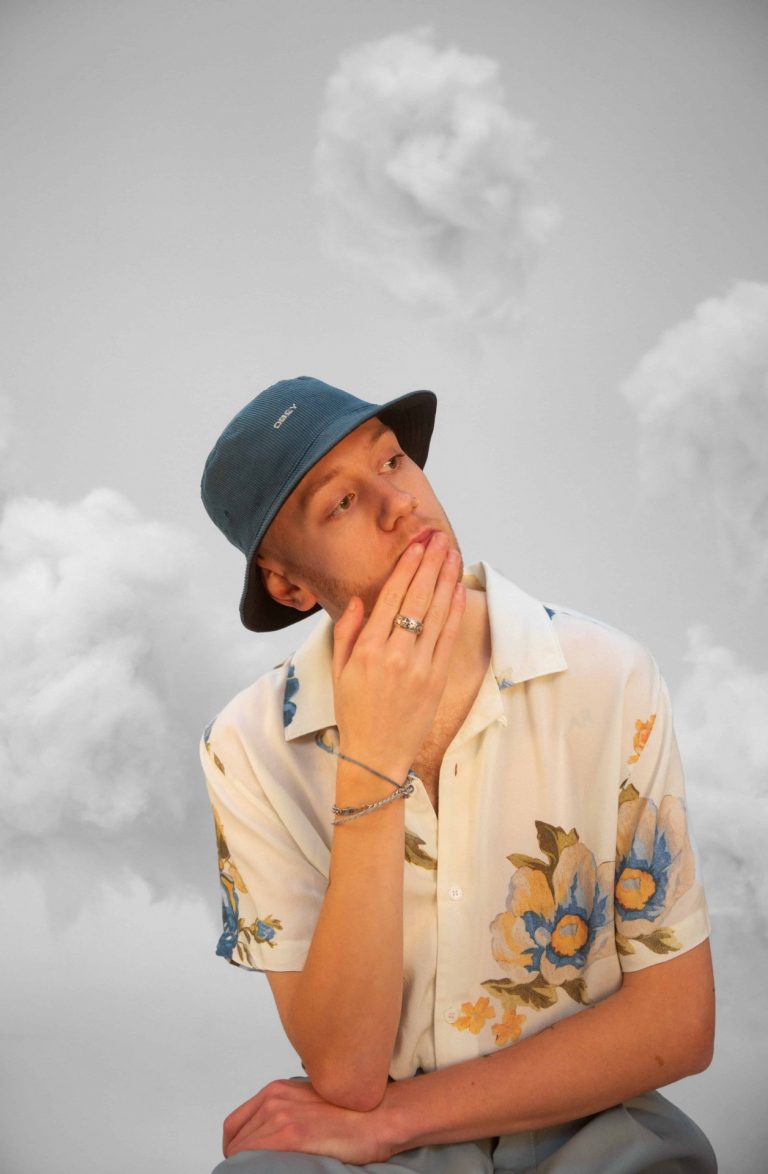 Getting To Know Miller Blue

As we spoke over zoom, Miller Blue’s studio set the scene for a chilled music led conversation.

With a father who was a bass player and a mother who was always singing around the house, music was clearly embedded into Miller Blue’s bones before he even knew it. But the singer-songwriter didn’t initially intend to be a musician, as he admitted “I originally wanted to be an architect”. This dream was short-lived after receiving a guitar aged 16 and becoming passionate about creating beats, from that moment on he started taking music a little more seriously. “I studied music tech, while travelling back and forth to London for studio sessions”, he later dropped out to pursue music full time.

After his breakout single ‘Rhythm In The Dance’, which was officially released in 2018, Miller Blue is now evolving into the man and musician he was destined to be – “When you are free flowing and organic that’s when it’s most pure.” From growing up in a small village in Shropshire and being a relatively shy child, Miller Blue has come a long way. “Being surrounded by nature and wildlife, I had no choice but to explore my local area with my friends.” Although he deemed his younger self as shy, he was equally an active child as he recalls climbing trees and skateboarding. As he grew, Miller began to explore the rave scene throughout his teen years in the Welsh valleys and became more aware of different genres of music.

Citing Soulection as a musical influence, Miller’s inspirations take us on a nostalgic trip back to the golden age of Soundcloud. Arguably one of the most successful producers to emerge from the Soundcloud era, Miller shares his admiration for Grammy winning artist Kaytranada, whom he admires for his skillful production and use of drums. Recalling his first experience of listening to Kaytranada after a night out, Miller remembers it as a light bulb moment, something just clicked. Other influences stem from game changing artists that have broken boundaries within the industry including Odd Future, The Internet and Ezra Collective. A project Miller admires and deemed his biggest musical influence is Australian artist Chet Faker and his 2014 project ‘Built on Glass.’

Miller Blue has a very eclectic taste in music, and as an artist with a soulful sound, big on the idea of staying true to himself, Miller is very clear on who his music is made for. “I always write it for me, it’s an easy way to let out any emotion whether positive or negative. But at the same time, it is open to interpretation and all about breaking boundaries”, adding it’s for “whoever listens and wants to embrace it.”

Released in April and accompanied by dreamy visuals showcasing a softer side, ‘Blush’ is the latest single from Miller Blue. Although the song itself sounds personal, it’s open to interpretation, based on yearning for a specific nostalgic experience. Miller pairs his smooth vocals to a guitar led single, while devoting lyrics that could be directed to a lover past, present or future. For anyone in their feels, ‘Blush’ provides the perfect soundtrack to that loving mood. The single is a follow up to Miller’s previous track ‘Me, Myself & I’, a collaboration with California based musician Ahwlee to create a Jazz infused hip-hop bop. The two artists are blended perfectly on this track as they redefine what it’s like to depend solely on yourself. Both ‘Blush’ and ‘Me, Myself and I’ are set to be included on Miller Blue’s upcoming project ‘The Tree Of Tenéré’ later this year. This is just a small taster of what Miller has in store for us with his much-anticipated album release.

Many have used the current pandemic to take up new hobbies or simply focus on mindfulness, but Miller Blue “used this as a time of reflection and staying true to myself”, the singer added he has used mediation and gratitude to stay hopeful during this time.  As we continued to speak on life, music, and the current pandemic, Miller shared his appreciation for real live music, as well as some of the things he had planned for the rest of the year. The pandemic has allowed Miller to build confidence during the time, while focussing on himself – “During lockdown I did this online series called Diary Days, turning diary entries into music through rap”, touching upon an increasingly important subject, as the topic of men’s mental health has remained neglected for some time. It was refreshing to hear Miller speak about ways he wants to embrace emotion and help others through the expression of music. “Eventually I would like to work for a mental health charity where we can combine music with mental health.”

“This is only the beginning”, notes the musician as we begin the discuss the future, mental health is one of the things he explores within his music, but there’s more to come, and definitely more honesty on the cards. “I want to be surrounded by genuine creatives, as this is the first time I have truly believed in myself”, for many the pandemic has been a time for self-growth and gratitude, it is evident Miller has used his time wisely. Going forward Miller would like to collaborate with those who are pure and radiate the same energy as him.

For those of you needing a motivational push in life, listen to the wise words of Miller Blue. An artist who continues to stay true to himself and someone who is big on manifestation, Miller believes the universe speaks and listens to us – “Trust your vision, trust yourself and manifest”, adding “be fluid and enjoy all moments of life good or bad.”