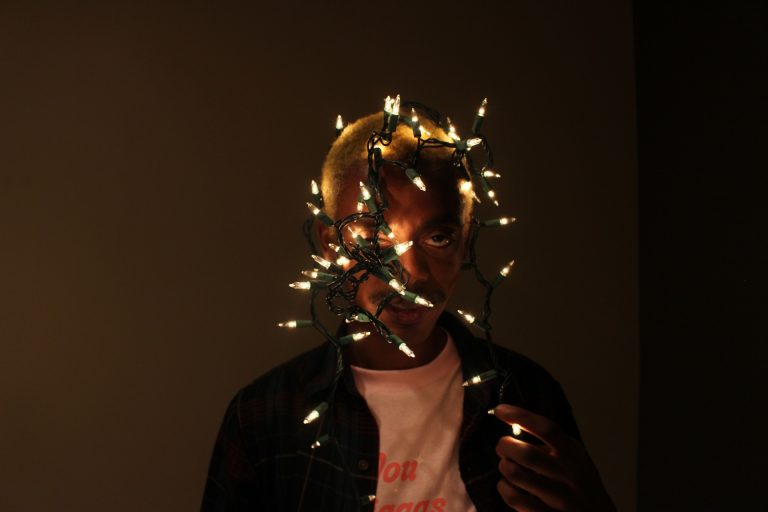 Getting to know Vritra

Vritra (aka Hal Williams) has been in the game for a long time now and it shows, with a impressive discography including projects as part of Odd Future, Jet Age of Tomorrow, Nobody Knows and creative duo Wilma Vritra, he’s raised the bar again with his upcoming album titled Sonar. At a generous 15 tracks long, Sonar covers relatable topics from identity and self-love to early beginnings in music as Vritra skillfully glides across soulful hip-hop beats produced by Leon Sylvers IV. Dropping on 4th September, Sonar has a versatile and effortless sound with tracks to suit your every mood.

We were lucky enough to ask Hal some questions about Sonar, new visuals for the lead singles ‘What’s That’ and ‘Air Raid’, what he misses most about performing live and life during a pandemic.

Hey Hal, thanks for chatting with us. If you had to summarize your Sonar project using 3 words, what would they be?

Sonar does a great job of transcending music genres, from classic hip hop to jazz and electronic too. Would you say you had any specific influences for creating the project? Artists or otherwise?

The sound of “Sonar” comes from the chemistry between me and Leon. We’re both into a lot of different music so I think that shows through. We didn’t intend to make it sound any specific way. Just genuine lyrical responses to the composition. Alotta fun.

The project artwork is beautiful! What was the inspiration behind that?

Definitely agree. That’s all Joseph. Leon suggested a few works by him and this one stuck.

Speaking of artwork, you’ve also got your own clothing line, WDYSWYEC, tell us about that, have you always been into graphic design?

Yeah, I’ve been into graphic design since high school, I used to do artwork and album covers for friends and I’ve also done the majority of my solo album covers over the years. WDYSWYEC is about expanding that into fashion, interactive design and product design. Just “prints” and graphics for now but there’s definitely more outside of that realm in store.

When it comes to music visuals, can we expect any Sonar music videos? How do you come up with your concepts/vision?

Yes there will be videos for “What’s That” and “Air Raid”. We worked with Enkrypt, a visual artist/videographer from Los Angeles. I didn’t direct these but the times that I do, it’s normally from letting the song speak and following the feeling it creates. Sometimes that results in a story, other times it doesn’t.

Do you remember the first lyrics you ever wrote?

Definitely not lol. I write too much. It was some skateboarding shit though. I’ve been writing since I was 15

What was the last album you listened to?

All the way through? Yellow by Denki Groove

When was your last live show? What do you miss most about performing?

My last live show (amongst non-virtual humans) was in December last year. It was a small show but I  got to perform on the same line up as Melo-X and Rob Roy, two huge influences to me and my work. As far as performing I just like hearing music loud and being immersed in it, seeing people react to music is cool too. Aside from that I’m more of a “making” music person.

What’s life like for you in the current pandemic? How have you been coping?

The only difference is having my son out of school while being in school myself. Balancing that takes effort but aside from that, what’s beautiful about right now is people are “trapped” with their thoughts and have to navigate themselves and their lives. It’s a great time for creativity and ideas. So for me, music, walking, meditating, vices, being around my son, checking in on friends’ mental health, all that keeps me sane.

What’s the first thing you want to do when life returns to some sort of normality?

There’s a “pseudo-normality” in America but this is really counter-productive. But I’ve always kept to myself and kept a small circle. I don’t really see this time period as a restriction for introverts. I guess if I cared about “going out” I would be eager to get back to normality, but most of the stuff I want to do I can do alone, with my son or with a small group of people that I’m normally around. If anything I might fly out of the states when this subsides.