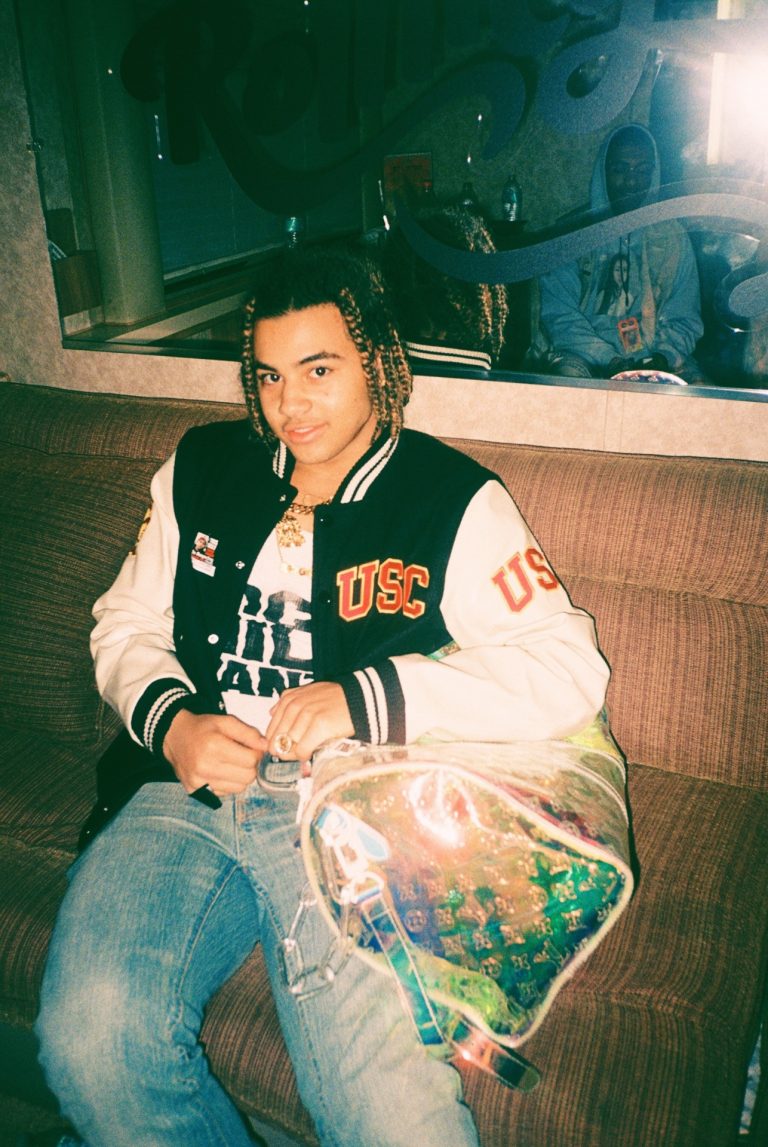 In Conversation with 24kGoldn

Despite Trump’s efforts to ban TikTok, the Chinese social networking service, there is no shortage of new viral pop stars accumulating millions of streams thanks to its power. Driven by a viral craze of TikTok, 24kGoldn is one of the West Coast’s most promising breakout stars. Delivering hits like ‘Valentino’ and ‘City Of Angels,’ his work is known for his melodic rap songs and a rockstar attitude. Not to be fooled, 24kGoldn also uses this outlet to express his emotions that would otherwise stay buried as he told us on top of other things like how he started, how he stays grounded, and more.

Golden Landis Von Jones, professionally known as 24kGoldn from San Fransisco, recalls being heavily influenced by the King of Pop: “I remember watching the Michael Jackson’ Video Greatest Hits’ VHS over and over growing up, so his swag is deeply embedded in my subconscious ahahah. My parents have always been really into music like my mom put me on to Kanye West, so I was always exposed to a wide variety of artists and sounds”, he reminisces.

The rapper admits that even though the choir wasn’t his cup of tea per se, he does acknowledge it improved his singing technique. He says: “It was all like Christmas carols and shit, so not really my type of music, but I always knew I had a good voice, but I think choir helped me learn how to sing better and more properly. If I could’ve picked the songs, middle school me would’ve had us doing Chief Keef and Future remixes”, middle school teachers take notes, spice up your repertoire as 24kGoldn suggests.

He is known for putting out high-energy music, but as soon as you dig a little bit deeper, you will come across songs where 24kGoldn clearly uses music to express feelings and say things that only music allows him to do so.  He elaborates on what is it about music that is so special: “There’s nothing in the world that compares to the feeling I get when I make a song I like. Music allows me to express myself in ways that just talking or writing can’t do. Music conveys feeling right? You can listen to a sad song and help through a sad situation or throw on a banger and instantly revive a party. There’s nothing else in the world that can do that.”

At first glance, 24kGoldn seems as a teenager having fun, putting out hits, but for a 19-year-old, he dismisses the idea of being happy all the time. He wants to let his fans know, it’s okay to have a vulnerable side: “It’s not always easy for me to do, but I think it’s very important to let people know there is a more vulnerable side, and I can make this type of music too. Nobody is happy and high energy ALL the time, and I feel like it would be inauthentic to try and act like I was. I make these types of songs because I want my music to be a reflection of me as a whole, not just a piece of me,” he explains.

As a rising star, working hard to avoid the ‘one-hit wonder’ label, 24kGoldn  shares his concerns about a burnout: “To be honest, it can be hard at times, especially during quarantine, because my biggest inspiration is life itself. All my biggest and best songs started off as a voice memo or a few lines written down that I’d brought to the studio and worked on later. Real-life is where the best songs come from, and the studio is just a numbers game. If you’re constantly inspired and getting in the studio every day, you gonna get a hit”.

On top of being a rapper and a singer, 24kGoldn is a former USC student. He went to the Marshall School for Business and ‘would probably end up specializing in finance or entrepreneurship,’ he reveals.  As his debut EP ‘DROPPED OUTTA COLLEGE’ summarises his college experience, 24kGoldn decided to dedicate his full concentration to music.

After ‘Valentino’ blew up, the next viral smash was ‘City Of Angels.’ Despite his label not believing in the track at first, 24kGoldn went with his gut feeling, and now the song has almost 160m streams. He shares how ‘City Of Angels’ became what it is today: “It was summer ’19, and my boy Omer came through to kick it and just so happened to bring his guitar, so I told him to play me an Elvis type beat, and that iconic guitar riff is what happened. That same night we went to the studio and finished the song, and I just remember feeling so confident that it was a hit. After a lot of arguing with my label, they let me put it on the album but still didn’t believe it was a hit, so I blew it up on TikTok and proved them wrong ahahah, but it’s all good now, hits make everyone happy”.

Receiving global recognition, ‘City Of Angels’ made it across the pond to the British talent YUNGBLUD. “After one of his LA shows Omer introduced us, and we hit it off, so when the song started blowing up, we already were cool. He fucked with it heavy, so it only made sense to have him hop on the remix”, 24kGoldn unveils.

The most recent banger out of the 24kGoldn headquarters is a feature with IamDior on ‘Mood’. He spills how this collaboration came about: “It was really accidental ahahah. Iann, Omer, Kbeazy and I were just chilling in his apartment, and Omer and Kbeazy started making this beat while I was going crazy on the new Call of Duty, so I guess the energy transferred to the music, and I started putting the hook together while I was playing, and Omer stopped me like “yo that’s hot cut that”. So I lay my hook, Iann does his verse, I come back with mine, and we listen back like damn this is actually fire as fuck”.

Before we head off, 24kGoldn granted us some wisdom on how to stay grounded and how to move on from the world we live in today. Golden, take it away: “All things good and bad must come to an end. After this is all over, we bout to have a renaissance. The environment you create for yourself is key to staying grounded. I try to surround myself with people who genuinely give a fuck about me and aren’t afraid to let me know when I’m out of pocket”.