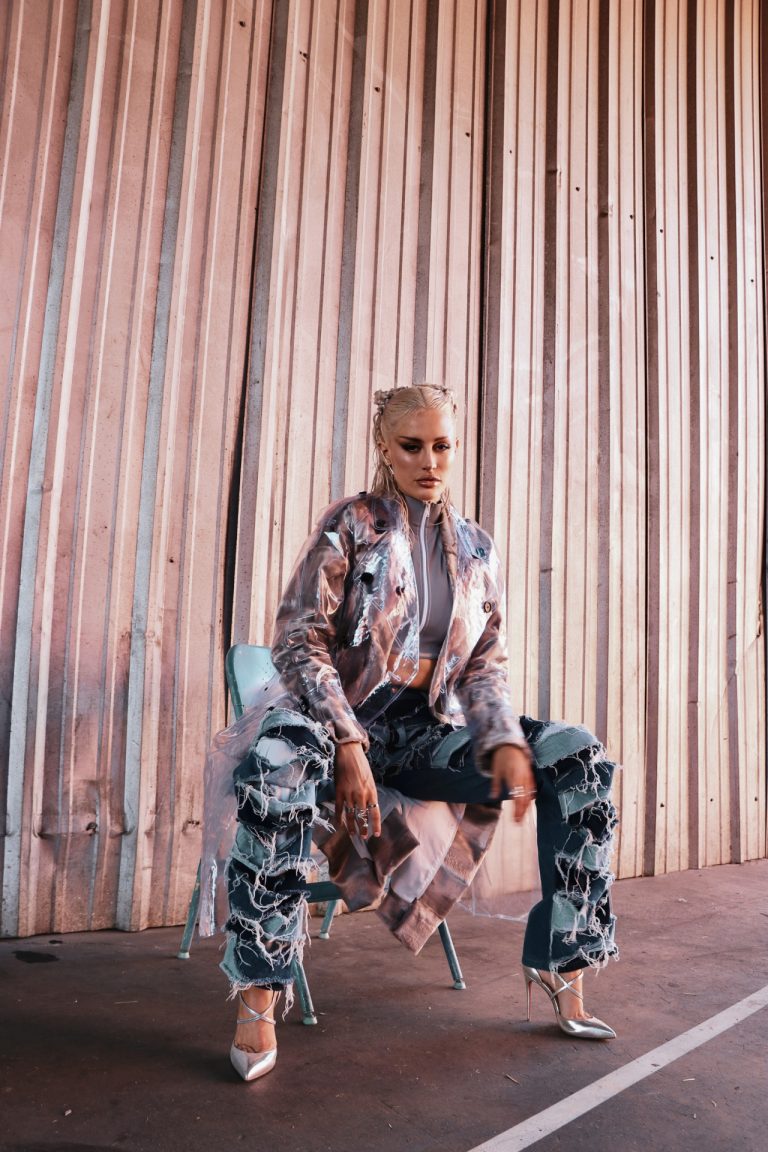 In Conversation With Moxie Raia

American singer-songwriter Moxie Raia stands on unique ground in the music industry. Blurring the lines between hip-hop and R&B, the artist has refined a futuristic and cosmic sound that shows just why she’s seen as a vocal powerhouse. Moxie’s latest single ‘Love Language’ is an anthem about a lover’s intuition, control, and mistrust, where the artist tells a story about how this culminates in a feeling of suffocation, knowing you could do no right. Above all, the song is one of empowerment, it’s a journey to where the artist comes out the other side, honing who she is and not accepting such limitations in life, portraying the message throughout, that neither should you.

The introspective themes of ‘Love Language’ are set against a backdrop of upbeat tempos and nostalgic “Aaliyah” vibes where Moxie’s fearless attitude shines. The artist was keen to tell a story that was relatable. In a relationship, both individuals should be able to grow and flourish, not be held back by a partner whose low self-esteem serves as a detriment. Moxie describes the inspiration in the following manner: “It was all about painting a relatable picture that shows a woman getting to a place where she’s trustworthy, committed and focused on work. However, she has a partner who is controlling and wants to possess her when she’s out creating and living in her purpose. It breeds a terrible dynamic.” The final message was one of empowerment, showing Moxie to be a female figure to look up to in the merging worlds of hip-hop and R&B, it’s something the artist is proud that she achieved, as she proclaims: “My intentions were to create from a confident and self-assured place. I would consider my goal achieved if I’m able to arouse these feelings of empowerment and affirmation in others.”

The single is accompanied by a visually compelling music video that see’s the artist first introduced performing whilst hung upside down. Throughout the video, Moxie showcases her highly trained dancing ability, whilst wearing an eye-watering number of incredible outfits, with each scene that passes the artist manages to grip you even more. Displaying her growing power as the song builds, the artist can be seen dancing around a man who’s lost his grip on her. On the visual story, Moxie describes the creative process by explaining: “Planning, Planning, Planning!! It was a seamless process that wouldn’t be possible without the team vision and shared goals. Story boarding and late-night group chats defined a lot of this process. Powerful women in music videos really inspired my work. Early 2000’s visuals of were top of mind. It’s when we really watched videos for the creative quality.”

Over the years, Moxie has delved into numerous different sounds but ‘Love Language’ stands out for its particularly refined nature. In many ways you could describe this single as signaling a new age for the artist. Taking inspiration from futurism and sci-fi, the final production showcases a new-found take on hip-hop and R&B, where alongside breakbeats, Moxie’s vast vocal range shines. Appearing throughout as an artist in total control of her newfound aesthetic, ‘Love Language’ gives her fans plenty to be excited about. On the source of this, the artist explains: “All of my fave things combined to make up my artistry. Growing up I listened to Motown and soul. All genres including jazz, have been part of my preparation which is why naturally R&B and hip-hop are major inspirations for me. Magic. The future. Boundaries. Rule bending is what guides my creation.”

Moxie stands as a powerful woman in a highly male dominated section of the music industry. As ever, visibility is vital, and now the artist is a role model that emerging female artists can look up to, knowing that making a name in this industry is possible. On her place in the industry, Moxie states: “Visibility and representation matters. I know my strengths and gender has rarely mattered to me when it comes down to putting in the work. I’m assertive and really stand firm on my vision. In this industry, you may find yourself fighting against this male dominated tide, but I invite anyone, man or woman to join me as long as they’re loyal and capable.”

With the gender gap beginning to very slowly narrow, is the age-old status quo of men calling the shots in the industry over? It’s too early to say, but there are certainly positive signs. A new world is in sight, and we must keep pushing in the right direction. “I don’t think it’s over, but it is changing and I’m more hopeful now than ever before.” Moxie explains, “Females are emerging as forces on the charts and in the executive board rooms of music. The new world will show us a different version of power and how empathy and emotional intelligence can shift the narrative for us all.” For those trying to break through into the industry from minority represented background, the artist has a few thoughts on the steps to take: “My advice for artists looking to breakthrough is simply to keep knocking and if they don’t see you, start kicking down those doors. Make beautiful noise until someone listens. This profession is equal parts heart and consistency.”

The artist’s journey to this point has been star studded, with collaborations with Pusha T and Post Malone, whilst catching the attention and praise from the incomparable Timbaland. However, perhaps the artists most important, life-affirming moment was when she toured with Justin Bieber. An experience that sparked a love for performing and introduced her to thousands of new fans. “I miss performing so much. It’s my favorite part of being an artist.” Moxie proclaims, “A tour of that magnitude was so amazing and so important for me to personally connect with the fans on that massive level. I learned so much about touring and being present with the audience. When you hear this endless echo of voices singing the words to your song and screaming your name, it’s a feeling that confirms all of your hard work and long nights. I can’t find the language or words to describe the feeling.”

Of course, that feeling has been lost for some time thanks to the ongoing pandemic. As an artist Covid did more than just remove that connection with fans, it caused aspects of doubt with the previously clear road Moxie was driving down suddenly disappearing. But it offered new inspiration and a level of adaptation to the newfound conditions. “Covid challenged my mental state a lot because I couldn’t see everything in front of me.” The artist tells us, “I was so programmed to think about the immediate and what’s next. I retreated within myself and started to create from spaces that I never knew possible. Covid offered expansion in my faith, specifically in the creativity and work. Even when you can’t see the work or its outcome, do it anyway, because you believe in its value and that will inspire others to see that its actually invaluable.”

‘Love Language’ really shows the world exactly what Moxie Raia is all about – a powerful female artist who’s eager to build up others. It signals a new chapter and one that shows so much promise. More than ever, Moxie’s vision is clear, and the world had better watch out for what’s to come. For the artist, the story is only just beginning, as she describes what we might expect later this year: “Building upon the futuristic world I’m creating with the character Carbon that takes place in the year 2989. This world provides a core of feminine energy that is empowering and inclusive. This single will follow another release which is coming soon. I would say that the project embodies out of this world creativity where we truly celebrate the music as art and the art as a story.” ‘Love Language’ is an empowering breath of fresh air from an artist who’s ceiling is far from known, for Moxie’s loyal fanbase, 2021 looks to be a year to remember.