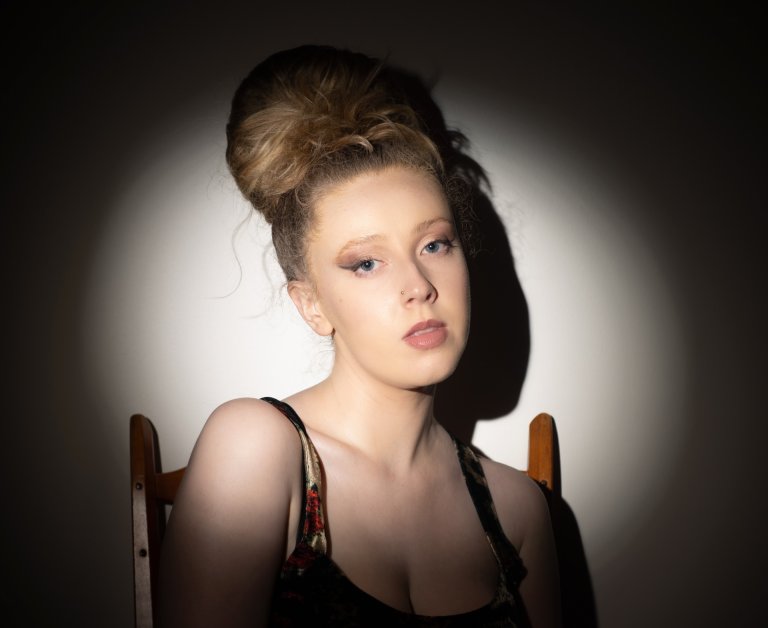 It’s 10 am on a Monday morning in Toronto, and we are joined by Kira Huszar, better known as a singer/songwriter LOONY. A few days before releasing her new EP ‘soft thing’, LOONY appears on our screen with a big messy bun and a morning coffee, looking cute as ever.

Hailing from Canada, a country with stricter lockdowns, LOONY exults at outdoor facilities being finally open. However, it’s been on and off; she shares: “It’s obviously been hard. Venues have been shut down, so there’s no way to play live. So I’ve had to live with some of my producers even just to make music because studios shut down. I didn’t want to be risking someone catching something. So we just lived with each other for a bit. It’s better than getting sick. I’ve been able to stay healthy. So I really don’t have any complaints”.

Born and raised in Scarborough, the 26-year-old artist recollects singing about being a woodland forest princess thanks to having a wild imagination. “There’s a forest by my house, and I used to love to trek through it and imagine I was some fairy or something,” she laughs.

LOONY says she’s always been writing and singing but mentions few pivotal moments like when she became a fan of My Chemical Romance: “Since very little, I was always writing and singing and doing them both together and giving myself challenges for how many songs I had to write that day. I knew from quite young that I wanted to do it, but there were pivotal moments that happened a few times where I was like, no, I really need to do it. There was one time in Grade Seven, and I was really obsessed with My Chemical Romance”.

Later in her teenage years, LOONY remembers a feeling of not wanting to be in school and not wanting to go to University but sticking with it knowing it’s important for her parents: “I just remember thinking, I don’t want to be here in school right now. I want to be making music somewhere. And I remember feeling that again in Grade Nine and then feeling that before leaving for University. It was important for my parents that I do it. Then they were like, if you go and you do okay, then we will let you live here, and you can try to make music for like a year”.

“I made little bands with my cousins and kids at school. And I went to camps where we were writing songs. My dad also used to record some of the songs I would write cause he had a little studio, and he thought it would be funny”, she shares and racks her brain for doing exercises like needing to write three songs a day and forcing herself to memorise them. “To me, that’s crazy because now I would never, ever try and do that. Um, but so it was kind of a mixed bag, but I definitely kept a good half of it private. It could have just been very simple and revolved around crushes I had or something at school”, she adds.

Nowadays, LOONY reveals she needs her laptop as well as her notebook, a good pen a cup of coffee for a good writing session. “I definitely need coffee. I feel happy if I have coffee with me”, she says as we cheer with our mugs.

LOONY also refers to her time in University as it helped broaden her scope of how she likes to talk about things: “I went to school for literature, and I feel like even though I didn’t want to be there at the time, it really helped me with some of my writing. Before, when I wrote, it was maybe a little too obvious, like I was doing a lot of telling instead of showing. I think just being there too and doing a lot of readings changed the way I view certain subjects. And I became a lot more interested in the mundane things about life that everyone can relate to, but it still feels very specific to the individual. I feel like it broadened my scope of how I like to talk about things and look at things”.

One year after LOONY released her ‘JOYRIDE‘ EP, she returns with a new concept project, ‘soft thing.’ This eight-track collection includes her previous singles ‘royal flush,’ ‘raw,’ and ‘either side.’ “I think I started in May 2020, and it’s taking just a little bit over a year. It feels so much longer because I’ve just taken off songs and make new songs. It’s been in flux a long time. Cause It’s a concept project. So I really want us to tell a story in a linear way from start to finish. Sometimes I would make a song that just fit this one piece of the story way better. There was a lot of push and pull to get it to where it is now. So that’s why it feels like it’s been really long”, she elaborates.

She continues by explaining the inspiration behind ‘soft thing’: “I was thinking a lot about my relationships, and I couldn’t be called to write anything that felt super cool or something that wasn’t directly soft and warm, and about the people I love. So I decided to make the whole product, just like one love story and break down a relationship from start to finish which is, I think, an experience that everyone can relate to”.

‘soft thing’ sees LOONY and her producers Adam Pondang and Noah’ 40′ Shebbib protegee Akeel fuse neo-soul, jazz, gospel, hip-hop, and R&B. Her current favorites being ‘faceless’ and ‘raw’ that is about “about the first time I felt the more, the purest thing of love which I’ve never really felt before,” she unveils. “it’s like when you actually truly see someone for who they are, and they see you too. And it’s not a scary thing. It’s a beautiful thing”.

Speaking of love, LOONY depicts a topic of being in limbo and accepting it on ‘either side.’ She shares her thought process: “It’s about when you’re in a tricky position, and maybe someone’s left you or left you hanging. And you’re not really sure where things stand, and it’s on them to make a choice. And you have to relinquish all your power and be okay with either one. Someone could be with you or be without you, and it’s still perfectly natural in a sense, I was thinking of how the sun always shines on one half of the world, and the other half is always asked to be okay with it. It’s not like they’re not freaking out, but they know it’s going to come back”.

Besides LOONY’s upcoming tour in North America, you can also catch her at this year’s Day N Vegas Festival and Governor’s Ball in New York. “I’m excited about it. I’ve never actually played a proper festival, so I’m very excited. I think I was supposed to do Governor’s Ball right before COVID happened, so I was starting to get very excited about that, and then it didn’t happen. So it’s great that it’s happening now”, she says and spends her days preparing the live set.