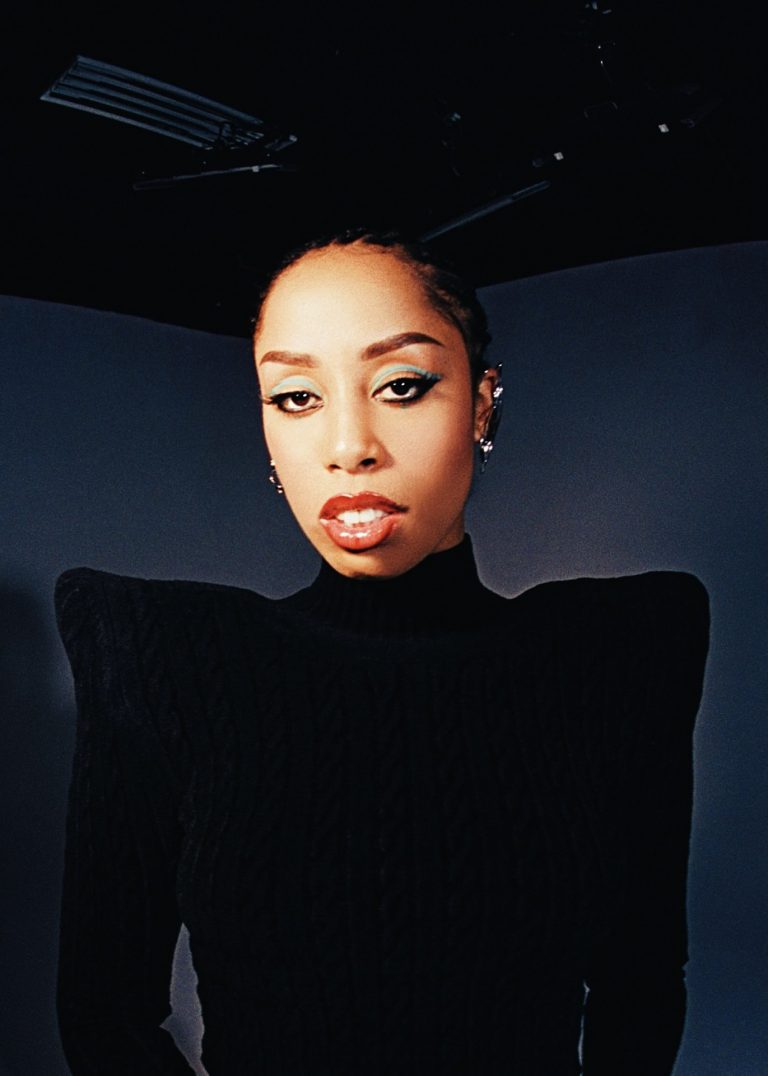 In Conversation With Rochelle Jordan

For the past year, Rochelle Jordan’s been working on her forthcoming album ‘Play With The Changes’ that is now ready to be released and conquer the music scene. The Los Angeles-based artist proves that time is golden, and with time anything can happen. On the new album, she delivers a brand-new version of herself mixing underground rave and R&B together and creating an irreplaceable musical experience. Rochelle truly charmed us with her sensitivity and full dedication to what she does. We speak to Rochelle as she discusses her music journey, new album, and a life she still trying to figure out.

How did your musical journey start; how did it look at the very beginning?

Music runs so deep in my blood; I’d say a good 70% of my family can actually sing or play instruments so it’s always been around me in some way or another. But it was early on in my elementary school days where I started hearing music differently and became really intrigued by it. I’d sing at school talent shows, my teachers would always tell me I’m destined to be a singer. Early in my teens, I’d always be asked to sing at weddings, late teens I started posting covers on YouTube… I honestly fell down a rabbit hole of music which every way it pulled me. I didn’t exactly know where it would take me or how it would all turn out, but I loved it and kept at it.

You dropped your first album in 2011, you already have great names on the list of collaborations such as Childish Gambino or Jessie Ware: how do you feel about what you went through so far and what do you expect to happen next?

It’s been such a long but necessary journey, and honestly, I still feel like it’s early days for me. I guess that’s what makes what I do so exciting. It’s forever evolving musically over time a bit, for me. It’s been a great ride so far. Speaking to what I expect to happen next, I just hope that I get to hear all sides of myself musically, I plan to dig deeper and go crazy with it, explore other creative avenues and hopefully collaborate with more amazing artists like the ones mentioned.

“Play With The Changes” is going to be out by the end of April: how would you describe this album in your own words?

Play With The Changes is a mashup of all the things I’ve ever loved about listening to music and creating it. The energy I wanted to encapsulate on this project was really one of excitement, imagination, colours and freedom. It’s important for me to keep playing around sonically, bending rules, bridging genre’s but more than anything challenging myself and the listener to step outside of musical boxes in a way that isn’t alienating, but more so refreshing and unexpected. I’ve changed so much as an artist over the years and It’s a positive thing, because change, as uncomfortable as it may be sometimes, is extremely necessary in order to grow. And If you’re not growing, you’re dead.

The album is honestly sick, I was listening to it while driving, and it felt like I have my own party in the car haha! It gives me amazing vibes; underground rave mixed with R&B – very original, how do you feel about the concept you have created? Comparing it to for example ‘Pressure’ (Which for me is a Destiny’s Child vibe, I LOVE IT TOO) it’s different but has something special to offer.

I’m so glad you were having a party in the car! Ha! That’s the best place to listen to music in my opinion. Yes, PWTC is very different to PRESSURE as far as genre goes, it’s more hard-hitting and probably the loudest I’ve ever been creatively, that was definitely on purpose. But one thing for certain is that it’s all very much me. Regardless of what kind of beat I approach; I make sure to hold true to my artistic identity which lies in my presence and vocal style. My harmonies, my lyrics, my melodies. The choice of beat selection whether R&B or electronic is all very much in the realm of synths, drum patterns and other sounds that I’ve always loved and played in. There will always be a connection and more than anything as long as I love it, I trust that someone out there will too.

Which song from the album is your favourite and why?

This question is always so difficult as my favourite song from this album always changes. Today I’d say my fave is, “Love U good”. I just love the chord progressions. I swear I feel like I’m floating to heaven sometimes when I listen to it. The concept of being a little strange, hard to love, misunderstood, I internally relate to that. Feeling like your inner weirdo keeps ruining certain relationships for you, I know many others can relate to.

How long was the process of creating the album? Who was involved, and who would you like to give special credit for taking part in this project?

The process of creating this album was an interesting one. It really started in 2015. This project evolved over the years. The many times I thought it was done, it wasn’t, it had only just begun. I knew the direction I wanted to go in which was key. My long-time producer KLSH and I put our heads together and began experimenting with some different and beautiful soundscapes and we found the perfect groove and he began executive producing the record. Shortly after that, we decided the mission was to find a few more producers to tap in with that had a strong musical style. He then put me on to MACHINEDRUM’S music, and by God’s grace, we started actually working with him which was sick. Then Jimmy Edgar came into the fold after hearing his insane creations. I was so infatuated with what these three producers were coming up with for me that I decided I would stop the search there and develop what the four of us combined would come up with. It was 6 years of tracks thrown back and forth, long nights of vibing together and connecting on a more personal level. Now it’s a family thing. I’m very blessed to have them in my life for more reasons than one! We also have some fire co-productions by ALIX PEREZ and SEPALCURE on this album. TOKIMONSTA then heard the record in its last stages in early spring of 2020 and so her label Young Art Records took the project on. Putting this record out through YA was definitely the best decision I could have made, especially in the time that I made it.

Tell us about creating the music video for ‘Next 2 You’

Creating the video for “NEXT 2 YOU” really satisfied me as a creator of this particular song. I always had an abstract, dark but romantic vision for it in my mind when recording it, I just needed help bringing it to life. Lissyelle Laricchia who directed this video was someone who I had been having my eyes on for about a year prior. With the colours, she plays with and her eye, generally speaking, I knew she’d be perfect for capturing this track visually. She absolutely killed it!

There are many descriptions of the ideal state of mind for being creative (especially during a pandemic). What is it like for you? What supports this ideal state of mind, and what are distractions? Are there strategies to enter into this state more easily?

I don’t have any specific answers for entering into a creative state of mind as inspiration comes and goes as it pleases for me. More times I honestly don’t feel like I’m in control of it. Anything can throw me into a whirlwind of creativity with such ease, then other times I will have a writing block for weeks, sometimes months. You just have to catch it when it comes and give yourself grace when it doesn’t. We artists can be so tortured sometimes, so self-inflicted pressure really doesn’t help. I think the best thing to remember is that your gift doesn’t just go away, it’ll always be with you so rest on that, practice without pressure and be open so inspiration can come to you.

What was the crucial moment in your career when you honestly decided that music is something you wanna go for?

I can speak to a moment in my life, where I think the turning point for me was a particular experience when I was around 11 years old. I had been admitted into the hospital for the umpteenth time behind a sickle cell crisis I was suffering from. I remember this one night as my nurse walked into my room to change out my IV and we began going back and forth in conversation. She asked me what I wanted to be when I grew up and so I told her | wanted to be a singer. She then turned to me with what I believe was probably concern and said something like “Oh my love, that is a really hard career choice for somebody like yourself who has this disease. It’s very stressful and will trigger your illness. It won’t be good for you. Is there nothing else you want to do?”. I knew then that there was nothing else. Was I hurt by what she said? Very much so and I had to sit in that cold and very real reality for years but the truth was by that time I honestly couldn’t see myself doing anything else. I still can’t.

Who/what does inspire you? Any favourite artists, people, events or maybe things around you that make you feel inspired?

I will always listen back to these iconic women Mariah Carey, Amerie, Sade, Aaliyah, Janet Jackson and many others in between for inspiration or to cleanse my palate. I heavily rely on beautiful scenery also for inspiration, which is why after this pandemic lift, I’m going to be a world traveller. Watching space documentaries really shakes me up and gives me a perspective to not take myself or anything too seriously which is also super helpful, but more than anything I think just living life generally brings about inspiration. If you’re open to it.

If you could choose the advice which lives in your heart rent-free and helps you to get through life, what would you say?

I’d say, we live on a round globe that is a part of a solar system that is floating around one sun. Our solar system is inside one galaxy filled with countless amounts of other solar systems. This one galaxy we are in is amongst a countless number of other galaxies in one universe. There are multiple universes. Anything and all things are possible.

If you could be another artist for one day, who would you choose and why?

I’d be Sade. To be so iconic, so timeless. To create songs that will forever be highly respected. To come out with an album once every year and give the people what they always need and just live a beautiful life in peace on a farm with loads of animals. That sounds about right to me.

Where do you see yourself in the future?

I see myself being happy and full of life, love and adventures galore. I see my music taking me there.

I just want to say thank you to everyone who has been with me on my journey so far. I see all your messages, comments, how you spread my music and how hard y’all go for me and I really don’t take it for granted. I really hope you enjoy this new album and I love you!

Stream ‘Play With The Changes’