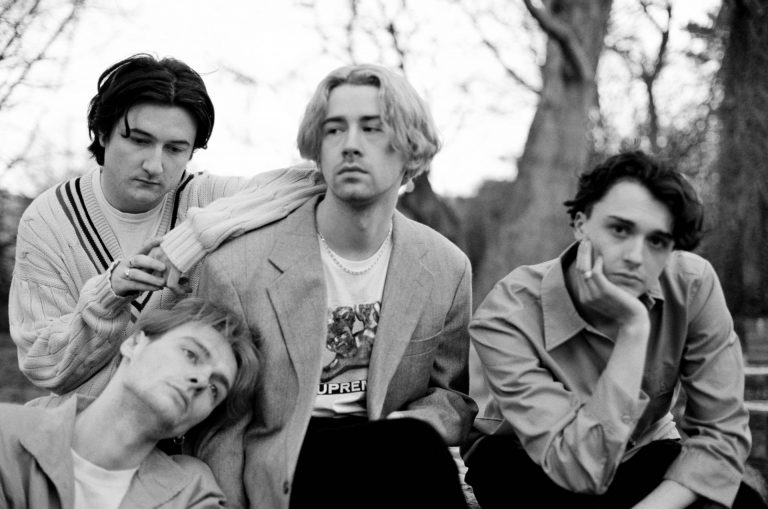 Irish four-piece band Modernlove. have been making waves recently with a slew of early releases that showcased a young male band in touch with their emotions, unafraid of telling the world how they were feeling. Now, they’ve just released their most important release to date, their debut EP ‘Monochrome Blue’. Containing six songs that delve into the world of disco-pop, the EP is a culmination of five years’ worth of work that formally announces the band to the world.

Consisting of band members, Barry, Cian, Danny and Graham, ‘Monochrome Blue’ tells the story of a group of twenty somethings trying to find their way in the world. Compelling as it is addictive, the group mange to juxtapose their feel-good musical style with honest lyricism that delves into the real issues of their everyday lives, whether it be feeling overwhelmed, isolated or the complexities of breakups. No theme is off the table for Modernlove. and you can only see them going from strength to strength in the future. Coinciding with the release, we spoke to the band to learn all about the ‘Monochrome Blue’, the impact of their Irish heritage and the importance of capturing their adolescence in the EP.

How did Modernlove. come together as a band?

Barry: We started out as friends really. I don’t think we had any grand vision of being in a band like this at all. We all met in school and became friends because we all shared a similar taste in music, which was uncommon in our small town. Initially we were just playing Van Halen and Led Zeppelin songs in a shed. I don’t think we ever saw it going this far. I think we were all just friends who happened to start a band, rather than a group of teenagers who met because they wanted to start a band.

How much of a role would you say that your Irish heritage plays on the sound of your music?

You’ve been working on your debut EP ‘Monochrome Blue’ since 2016, what emotions did you guys feel when you finally released it to the world?

Cian: It was very cathartic. These songs mean so much to us for so many different reasons. You can literally hear us growing up on this EP. The songs span from 2015 all the way to last year. It’s been so strange to finally let go of these songs that we’ve been writing and re writing for 6 years. It’s great to finally have them out but it’s also a little bit bittersweet to let go of them. This EP kind of book marks the end of a very significant period of time in all of our lives.

Given the early success of numerous singles that now feature on the EP, was there a sense of pressure that came with the full release?

Graham: I don’t think so. We don’t like to concern ourselves with that kind of thing. Obviously, it’s amazing if people like what we do and we’re very grateful for the support, but I think we mainly write for ourselves first and foremost, we’re not trying to impress anyone and nothing we do is contrived at all. I think if you try to chase trends and write with what other people will like in mind, you’ll go crazy. And for us personally our music would probably just be crap. So, I think if we stick to that principle and just keep doing what we love then hopefully people will continue to relate to us.

Were there any specific inspirations that drove the EP in a certain direction?

Lyrically the EP draws on rather personal themes, delving into highs and often, lows. However, you manage to juxtapose this with an upbeat, disco pop aesthetic. Is this a style that perfectly illustrates life in your 20s?

Barry: Definitely. We’re so inspired by artists like prince and Michael Jackson who are just masters at making catchy pop songs. Most of the time we’re just trying to emulate them in our own way musically. But I think lyrically you want to write about the things that impact you most in your life, and those things are very rarely positive. It’s always been our best outlet for expression to just write down how we feel, it just so happens that most of the time we’re writing it down on top of very dancy pop songs.

The release comes with accompanying music videos across four singles, what’s the visual story behind these? Is this a medium you enjoy delving into?

Cian: We definitely enjoy making music videos for our songs because they really give us a chance to kind of expand the world of the song, as pretentious as that might sound. Songs like ‘Liquorice’, ‘2 Missed Calls’ and ‘come over x’ were really fun to do because they allowed us to actually live out the stories of the songs in a way that really helped us cement an aesthetic that we had always imagined in our head. With ‘lmk (if you wanna see me)’ we wanted to juxtapose the song with a very raw and DIY feeling video, because when we wrote that song we were all in isolation, feeling very low and unsure of the future and it just didn’t seem right to have a massive video for it.

You performed ‘Liqourice’ and ‘LMK’ live on BBC Introducing, how important was that moment for you?

Danny: It was a huge moment for us. We’ve grown up listening to BBC and it’s always been a dream to be a part of it in some way or another. The support they’ve given us has been amazing, especially at such an early stage in our careers. We’re so grateful for the opportunity.

What can we expect next from Modernlove.?

Barry: We’re always writing and thinking about the next thing. We’re focusing on our next EP at the moment while also getting ready to gig properly again. We’re playing at Live at Leeds on the 16th of October which will be our first ever gig in the UK. And then after that we have a gig in The workman’s club in Dublin on the 5th of November and then the Social in London on the 11th of November. So, we’re getting ready for all of that and I’m sure there’ll be more announcements to come as well.