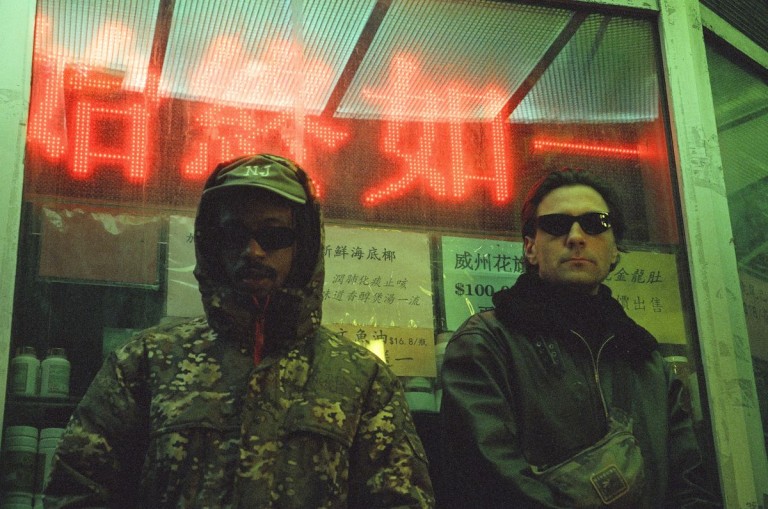 After their recent release of ‘Moonchild’ (released June 24th), New York-based duo Psylo are back with the hard-hitting, espionage aesthetic music video. The single was a triumphant debut and solidly signifies the pair’s commitment, attitude and friendship toward each other and their creation Psylo.

Now with the trippy, psychedelic accompanying video for ‘Moonchild,’ it combines both the sci-fi elements of the track with passion, creativity and determination – which flows through the veins of Psylo and the music they create. Otto explains “the concept of the video revolves around Ziggy’s line in the hook ‘and that search for yourself could turn into a chase.” He expands “playing on the concept of searching for one’s self we wanted to lean into illustrating that, via the imagery of espionage. The aesthetic influences were drawn from 60’s/70’s espionage films as well as 90’s hong kong cinema… with a bit of 2001 esc psychedelia sprinkled on top.”

Zig also speaks about the video, “by the time you fully understand what’s taking place in this video, you’ll be thinking about shit differently & that’s the mission.”

‘Moonchild’ is the conceptual framework for an upcoming album, which is a sound inner-space exploration. The production of this single was inspired by gritty 90s NYC hip hop. Similar to artists like Wu-Tang, and Smiff-N-Wessun, they combine trip-hop reminiscent of Portishead and early Gorillaz.

Psylo, a Brooklyn-based duo comprised of rapper Ziggy Zombie and producer Otto, is planning a year of fantastic releases. With hip-hop production reminiscent of Bristol trip-hop and East Coast 90s hip-hop, the two artists bridge the gap between the past and the future (something becoming popular amongst artists like Kendrick Lamar, in his latest album ‘Mr. Morale & The Big Steppers’).

Ziggy Zombie (originally from New Jersey), one of the minds behind Psylo, takes you on a journey with his ethereal lyrics – a sonic descendant of Kendrick Lamar and Erykah Badu. Otto (born in Pennsylvania) has a sound heavily influenced by Italian and French film soundtracks from the late 1960s and early 1970s, woven within a tapestry of 90s East Coast-style hip-hop production.

After Otto decided to study at college in New Jersey, they found each other in the music scene and the pair came together – with a bright philosophy of creating a new-wave sound. The duo’s decision to call themselves a creative duo clearly represents their constant collaboration in creating esoteric, timeless music.

‘Moonchild’ is an ominous, sinister yet groovy track highlighting the intense combination of genres, that merge so well. This gritty yet smooth music creation is the first instalment in a long road of releases from Psylo.

In an introductory interview with Psylo below, Noctis Magazine get to know their place in New York, and their ambitions and uncover thought-provoking themes around their single ‘Moonchild’.

How did you two meet, and when did Psylo come into being?

Through common connections in the New Brunswick, New Jersey music scene. Psylo began creating music as a collective in 2015.

What inspired the name PSYLO?

A psy, as in psyche, and a missile-like silo, implying that the mind is a weapon.

The debut single ‘Moonchild’ is sickening, can you talk about the track and how it came about?

How does your collaboration process work?

Otto creates a structure for a rhythm, then we brainstorm a notion, and Ziggy’s words emerge. True to perfectionism, the practice of adding ingredients to the formula continues until the song is finished.

What do you want the audience to remember about your first single and music video?

Earth is a place where ill minds go to waste.

What are the primary sources of inspiration for the song?

When we were in college, I became fascinated with the science of consciousness. It was mind-boggling to discover about ancient societies that had belief systems that are now being verified by current science… which regards consciousness as a field, the substrate of all reality. The weird thing is, before I ever talked to Zig about it, it was precisely what his lyrics indicated. That is the foundation of ‘Moonchild.’

We wanted to give them a punchy glimpse into our notion of reality. With consciousness, we want to strike somebody in the mouth. ‘Moonchild,’ I believe, does a terrific job at this; the production, the lyrics, it all punches you in the mouth. Consciousness is beating me up. We want to get people thinking! I am the Subconscious rapper who gets people to think.

You’re getting ready to release an album; can you tell us anything about it?

The album has 14 tracks; one thing we want to emphasise is that it is a unified body of work, a cohesive project into which we have placed a lot of consideration. We were determined to create an album rather than merely a collection of tunes. I’ve always admired art, whether it’s music, cinema, or whatever, where taking anything away would make it incomplete, and adding anything more would be unnecessary and useless. Our first tune, ‘Moonchild,’ really lays out the concept for the entire album; it’s the starting point, and it establishes the basis of Psylo both artistically and conceptually.

What should people expect to see from Psylo in the next few years?

You can expect to see change from Psylo over the next few years. As we continue to evolve as musicians, we’ll also be contributing to the evolution of the world.