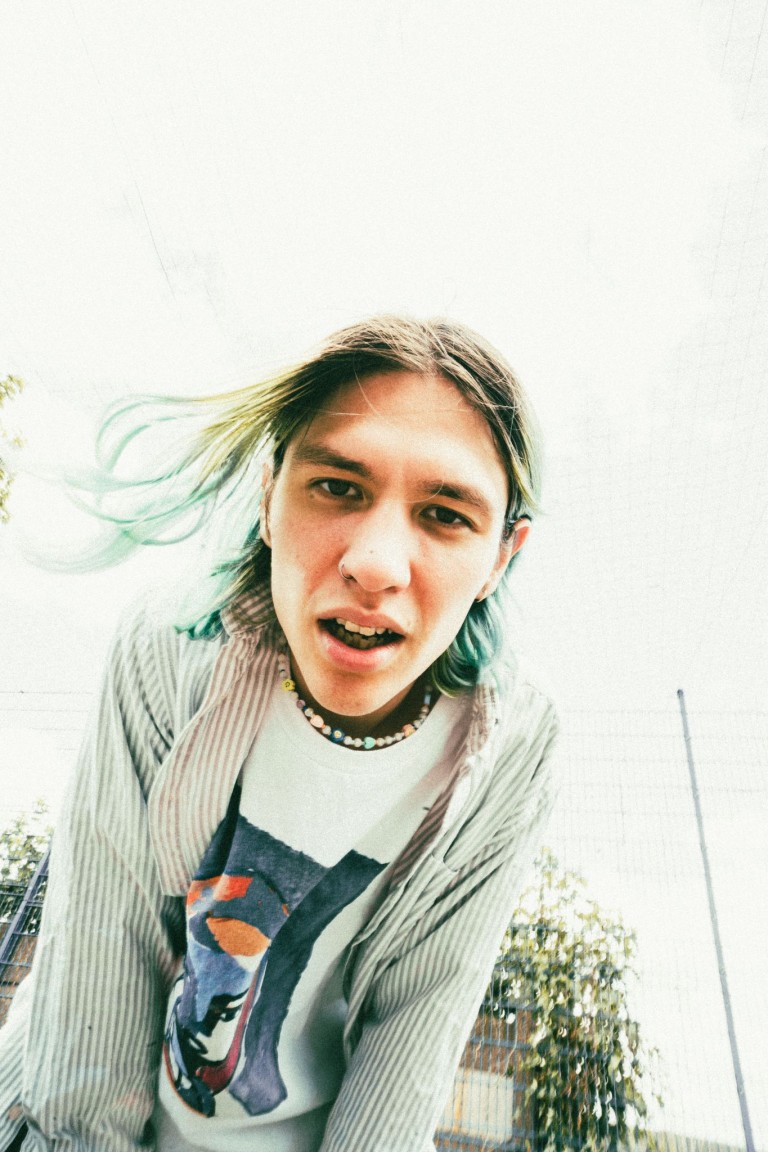 On a sunny Saturday at Finsbury Park, among the bustling crowds of Community Festival, we caught up with Daisy Brain, just before an absolutely electrifying performance on the N4 Stage, solidifying himself and the band as natural born stars. Daisy Brain, the brainchild of Will Tse and Dan Hvorostovsky, is a charismatic grunge-punk band, with influences stemming from Green Day to My Bloody Valentine. With a nostalgic sound conjuring up thoughts of the golden years of grunge, Daisy Brain breathes new life into 90’s rock bands, encapsulating everything we love about the decade and genre including it’s down to earth relatability.

With Will beginning this phase of his musical journey only two years back, Daisy Brain shows with real talent and a great team, how much can be accomplished in a short space of time, even so in a pandemic. Read on below as Will of Daisy Brain shares his outlook on life, what was going on in his life when writing ‘Small Matters‘, the origin of his band name and more.

So we’re here at the amazing Community Festival, how are you feeling?

You did the Great Escape as well, I managed to miss that performance because I couldn’t run from stage to stage in time, the massive venue was like literally half an hour walk or run! So I’m excited I could catch your performance this time. Would you say you prefer bigger or smaller festivals?

It depends on the event really? Like, obviously, I’m always going to prefer our shows which aren’t always the biggest, like the main stage or second stage – but like, I do really enjoy playing festivals like this.  It’s still new to us, and it’s just really exciting for every member of his band.

Let’s go to back the very beginning, what got you started in music?

I was going to say probably like Green Day. I was never really shown much music as a kid. My parents listened to like Kylie Minogue and Snow Patrol, which I love. But I never really connected with it, and then a mate brought home American Idiot and I was like, this is amazing. I instantly wanted to start learning guitar because I wanted to play those songs. So yeah, probably that.

There’s so many! Ah, that’s really difficult. let’s just say the first one I mentioned, American Idiot, lets go with that one!

And what type of music inspired you to make your music? Would you say that differs with each project?

I used to listen to a lot of guitar music like obviously Green Day and then My Chemical Romance, My Bloody Valentine – a lot of the 90’s stuff, Nirvana and Pixies. I think that definitely inspired me to like start writing. But I didn’t actually start doing like guitar music till I was like 20. I was doing a lot of like pop stuff. I was actually like, big into production, so I was doing a lot of pop production, writing for artists. Then near lockdown time is when I decided I wanted to start a guitar band – obviously not gonna happen. So I was making everything kind of myself with one other guy called Russian in the band, we were sending each other demos and just making a band in a bedroom. That’s how it all came about.

Your band name Daisy Brain, where did that come from?

Someone described me as Daisy Brain or having Daisy Brain? I can’t even remember the situation, I was up in the clouds. Yeah, someone just said you’re a real Daisy Brain and I was like yeah, I guess I am. And that kind of just stuck. Now it’s the name of the band.

I’m interested to know what your songwriting process involves, what inspires you to write your next hit?

I think there isn’t anything specific that inspires me to write. Obviously, occasionally I’ll listen to new artists or maybe like, a chord progression will inspire me to start writing a song, it will never be the same thing. Honestly, I just wing it. I grab the guitar and it will take me a half an hour to figure out a progression I like, then a beat like comes into my head. I’ll write like a quick demo on top of it, and I’ll get my best mate Russian down to come like help me flesh out the entire song. You know like add a sense of colour, his knowledge of harmony is incredible, together we’ve written everything.

Tell me what your new track, Small Matters is about…

I mean, I like to think of myself as quiet and relaxed. On rare occasions, there are moments in my life, I feel like at any moment I could snap could be the small things do I mean? I guess I was writing that song at a time I was really frustrated. The song was really hard to write because I was in a really angry, frustrated mood anyway, I struggle with lyrics a lot of time. So yeah, definitely, the energy of that song was so organic, it was just bearing raw emotion.

Moving forward what can we look forward to? Do you have any tours coming up? You’ve got one with Lauren Hibberd, which I’m very excited about. She’s amazing, I’ve seen her live. Have you met and worked with her yet?

We’ve not worked together. We’ve met her at The Great Escape. She’s a really good friend of ours mate, who drums on Small Matters. So yeah, we’re doing Lauren Hibberd’s Tour, Reading and Leeds at the end of August and then we’ve got our own headline tour in November which is great. Around then there will be a few more bigger support shows.