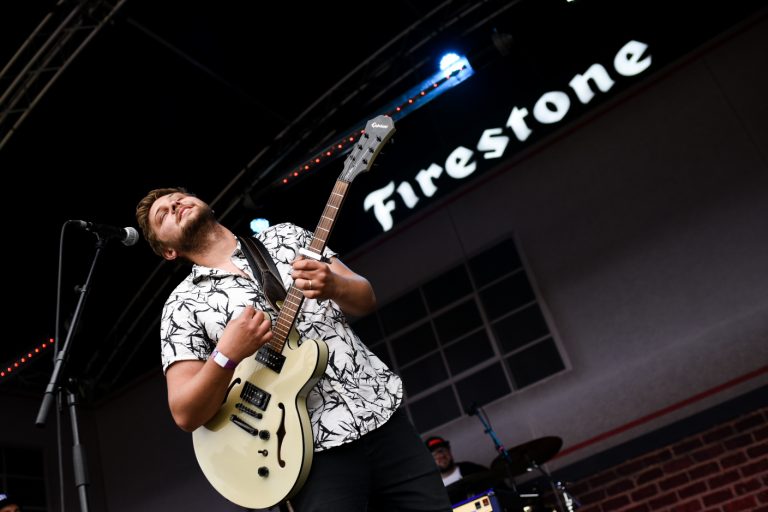 John Nicholas at All Points East 2019

On Sunday, May 26th, people are gathering at London’s Victoria Park to enjoy acts like Christine And The Queens and James Blake at this year’s All Points East Festival. The man of the hour and the winner of Firestone’s Road To The Main Stage competition, John Nicholas is set to perform at the Firestone stage in the afternoon.

Walking towards the Firestone stage in anticipation wishing the dark clouds would go away, John Nicholas is on stage ready to show the All Points East crowd what he’s got. As a winner of Firestone’s Road To The Main Stage competition, it was John’s pure talent, perfect vocals, and lyrical storytelling that made him stand out out of the other 550 contestants.

Standing next to the TV and radio presenter and host of the Road To The Main Stage competition, Abbie McCarthy shares this is her first time seeing John perform with a band and she definitely approves. McCarthy highlights John’s vocal abilities that have put everyone on Team John.

As the performance cranks up despite the subtle rain shower, people assemble around the Firestone stage and vibe to John’s tracks ‘Free,’ ‘Run Away’ and other songs from his EP ‘What My Eyes Fail To See.’

The Road To The Main Stage competition is helping out grassroots artists since 2015 and during this time generated over 10,000 votes and received more than 2500 entries. It may seem like another battle of the bands contest, but it is quite the contrary. Besides the natural exposure, Firestone gives the winner, like John Nicholas, a Volkswagen van as a transport vehicle for future tours, an opportunity to perform at popular UK summer festivals and a slot to headline Abbie McCarthy’s Good Karma Club, plus studio time with Jayce Lewis at Northstone Studios.

Still catching his breath, John reveals when entering the competition, he did not believe he would even get through the first stage and here we are today talking to him as the winner.

As a 28-year-old singer/songwriter from Bridgend, South Wales, John relates to other musicians fighting to make it in a world of so many acts: “Talent is part of it, but I think it’s persistence and playing at shows when there is no one there, it’s the case of being driven”.

“There’s so many people doing it, and now in the age of social media, people can just give themselves a platform just straight away, but it’s difficult to stand out from everyone. The challenge is to find your uniqueness. I just love playing live, so that’s how I’m trying to win over the fans. My two points are my vocals, and I try to write songs that are relatable based on stories, based on stuff that I’ve experienced, based on stories that I’ve seen people tend to relate to”, he shares.

Before the competition, back in September 2017, John ran each leg of the tour to raise money for Parkinson’s UK for the release of ‘Run Away.’ John describes this experience as ‘one of the best weeks ever,’ he elaborates: “It was 8 days, just my trainers and me. My mom has Parkinsons, so I tried to figure out a way to play some shows and raise awareness as well. We were releasing a track ‘Runaway’ at that time, and I said to my manager ‘oh we should do something to do with running to promo it’, and he was like ‘that’s a great idea’, and we ended up running a marathon before the show, very slowly but we got there, 20 miles in six days”, he proudly replies.

After speaking to John Nicholas in person, I join the Team John wagon. There is no doubt about his talent, determination, and pure heart. Thanks to an initiative like the Road To The Main Stage competition put together by Firestone, unsigned artists get to branch out and get closer to their dreams and goals. The number one aim on John’s list is conquering the U.S. now.