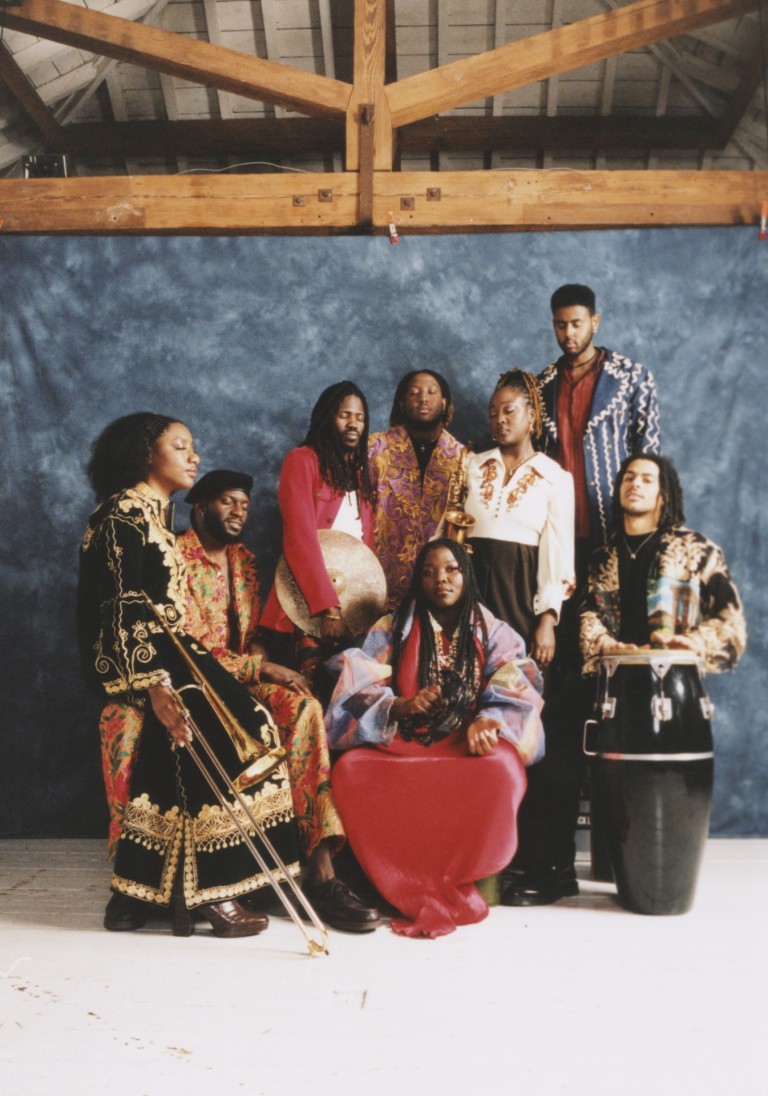 Afrobeat music has certainly made a comeback these past few years. The genre is not new however it has been reinvested by contemporary artists offering a more modern interpretation. Historically, many tend to say Fela Kuti was at the origin of Afrobeat. The Nigerian artist was using it “like a platform to express the issues going around Nigeria and the continent in general”, tells us Sheila Maurice-Grey – Trumpetist and vocalist of the music collective Kokoroko. It was a way for the renowned artist to discuss political and social matters faced at the time. Afrobeat has its specificities that are not so easy to reproduce. “Musically, the main characteristics are the drums,” says Sheila. “They are played upside down, so a lot of people cannot play Afrobeat. It can be hard to switch your brand to this rhythm” she continues. Nevertheless, this challenge did not prevent the collective from exploring the genre and adapting it to their own style.

Although it is hard for members of Kokoroko to come to an agreement when it comes to their date of creation, they can remember it was between 2015 and 2016. “A few years ago Sheila and I were talking a lot about Black/West African music. We just wanted to change the vibe and the way it would be played in London“ tells us Onome Edgeworth – percussionist of Kokoroko. At the time, Sheila and Onome were working together in an art organisation in Kenya. Since the creation of the group, many things have changed – from the members to the style and sound they produce. However one thing has remained: their common love and passion for Afrobeat. The 8 members are coming from different backgrounds but connect through music.

For Sheila, Afrobeat has been present since her childhood. “I grew up playing Afrobeat, there was a general interest in that music, a general connection to it.” The desire to play music also came early in Onome’s life. He grew up in a Nigerian household in which the culture of performance was really present. Being submitted early to many musical influences had pushed him to explore outside what he already knew. “You are keen to explore, to open up. My influences were all the Nigerian bands.” Onome continues “of course we must put Fela first. But honestly, all over West Africa there was a culture of bands at that time.”.

Their first EP – KOKOROKO – released in 2019 marked the beginning of an international recognition. Most of these songs were primarily developed through live performances. “We were debating on whether we should record it in the studio” confides Sheila. Onome adds “It was actually hard to record them in the studio without the crowd. We were really fighting to have the same energy we have on stage in the studio.”  In spite of these challenges to record an album meant for live performances, the collective managed to entertain us for 24 minutes, which represent 4 songs in total.  This EP is an exciting prelude announcing the limitless potential the collective has.

This year the Kokoroko comes back with a full album named Could We Be More. This 15-song new album has the mission to bring the feeling of joy and homecoming to the listeners. Could We Be More has been composed in a very different context than their EP in 2019. First and foremost, it was created during the context of a global pandemic.” We had space on our calendar so it was actually a good time to do this album” explains Onome. They went outside London, by the sea to work on it. “Being by the sea changes you” continues Onome. It was a very new process for Kokoroko but they experimented and gave us an ambitious album mixing afrobeats with a variety of genres like soul and funk.

During spring 2022, the collective toured in the UK for the first time since the beginning of the pandemic. “For not doing many shows, to do a whole tour was very intense. It felt really good,” says Sheila. The excitement from the idea of going back on stage after such a long period was very high among the group. They created a new show for the pre-album.”We are doing something different and we hope people can understand and do the journey with us” explains Sheila. Onome was certainly looking eager to play live but at the same time was a bit nervous. Nevertheless, it enjoyed reconnecting with live performances. “During lockdown a lot of us changed, our energies changed so it was a new experience for all of us”  states Onome.

When remembering past experiences on stage the best memory the collective has was when they performed in San Adrés and in Brazil. Onome claims that “it felt like a month but it was actually just a week.” Beyond the stimulation they had playing live for these audiences, they also truly enjoyed discovering the local cultures and traditions. Wherever the collective is playing they aim to connect with their public. They hope to have a positive influence and are receptive to the environment they are in. Kokoroko performing live is a unique musical experience thanks to their  commitment to share their love of music.

When asking what message they want to convey to their audience, Sheila mentions  “a feeling of fulfillment or feeling of peace”. Onome wants to make the audience journey with them. “It is a very unique journey for each audience” he concludes.

Their last album is a wonderful window to the endless possibilities of the collective musical identity. Could We Be More certainly fulfill its purpose. We can’t wait to see and hear more of Kokoroko.