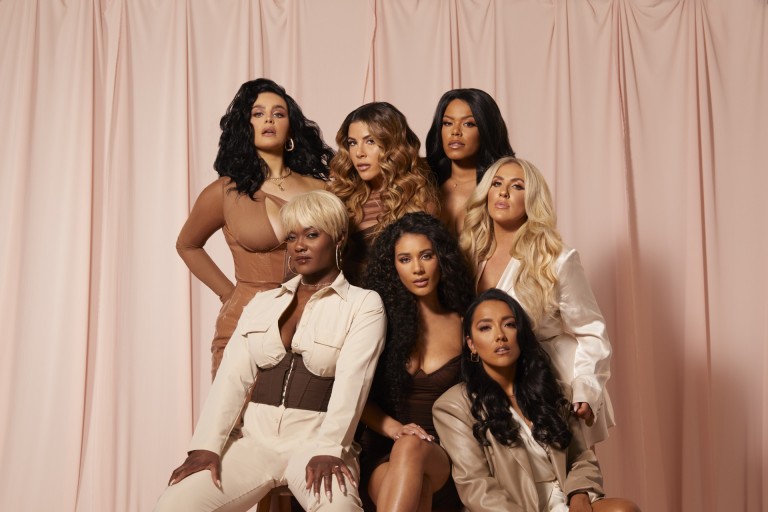 A friendship birthed from being cast in the now worldwide spectacle Six the Musical, Jarnéia Richard-Noel, Millie O’Connell, Natalie Paris, Alexia McIntosh, Aimie Atkinson, Maiya Quansah-Breed and Grace Mouat have embarked on one whirlwind journey together. Witnessing a show erupt in front of your eyes is one thing to stop these ladies in their tracks, but to excel even further to becoming Olivier nominated actors on top of building a die-hard cult following along the way marked a brand new milestone for each of them.

Riding on the back of such monumental success, SVN was formed out of pure adoration for each other. When curtains closed on their time in Six, these ladies were far from ready to part ways, soon creating SVN in the midst of 2020’s lockdown as a way of keeping connected to each other. A string of drive-in performances and their very own live-streamed concerts ‘The Reunion’ and ‘Girl Power’ attracted thousands of international viewers during a period where unity was most pivotal to us all. Not only did SVN bring their audience closer together, but their love for each other grew intensely.

Moulding contemporary soundscapes with clean-cut, celestial harmonies, SVN breathe fresh air into the music of today. Ahead of their headline show at O2 Academy Islington, the ladies sit and tell us how they’re gearing up for the special night…

Hello ladies! What have we all been up to?

Jarnéia Richard-Noel: We’re all kind of everywhere at the moment! Some of us are doing shows, some of us are at home… We actually had a group Zoom meeting this morning sorting things out for our upcoming concert at O2 Academy Islington so it’s all going on!

We don’t think we’ve ever witnessed such a strong bond between cast members before – it’s so beautiful to see! Take us back to five years ago when you first met to join the cast of SIX…

Alexia McIntosh: Oh yes honey! We’ve got a bond like no other!

Millie O’Connell: It’s mad because we all came into the experience on the same trajectory, we didn’t know each other or anything about the show, we built it from the ground up. So it just so happens that all of us seven were put here at the right time for the right reason. Even down to our harmonies, they were always so blended and still are to this day, we each have little pockets that we sit in. So to build that bond and to still have it now is quite rare like you say, but because we’ve been living in it for so long it’s become our normal.

Maiya Quansah-Breed: I think that is why the show became what it did, because people could tell that we genuinely enjoyed what we were doing and that we genuinely loved each other. We were put together because that’s the nature of what we do, but it just so happened that we all clicked.

The concept of SIX as a whole, you know, queens forming their own pop group… Did this inspire the making of your own girl group?

Lexi: When we were performing the show at Edinburgh Fringe I was honestly like, “wow, we can actually sing.” Like, you know when you hear a harmony and it’s actually lit?! I was like, “girls, we should form a girl group,” and they looked at me like I was crazy. This was in the very early stages and our bond grew since then, and that’s when Aimie asked if we should do a reunion show during lockdown and so we did… We aptly called it ‘The Reunion’ and I think we were one of the only live shows open at that point. How we pulled it off I don’t know!

Aimie Atkinson: We had thousands and thousands of people live stream it from around the world. We were just so shocked that people wanted to see us outside of Six, it was a real light bulb moment of “Oh my god, they’re supporting us as people and not characters,” it was amazing.

SVN debuted with a cover of Jessie J’s ‘Queen’ – what made you ladies want to introduce yourselves in this way and with this particular song?

Aimee: I think it was really important for us to show our vocal abilities because we’ve been so attached to those characters for so long that it was nice to do something that really meant something to us, especially with a song that urges you to be whoever you want to be and to just love yourself. I think that was really important. And you know, we love Jessie J, so that’s a bonus.

There’s such a sense of girl power in the air too – was something like this always going to be at the forefront of the group?

Natalie Paris: Yes massively! From day dot we’ve always respected each other and learnt stuff from each other; everyone brings something different to the table which makes it so special. So of course that was going to continue for us and is still continuing for us. We want to empower everyone, not only women, everyone from all communities.

Where would you say most of your inspiration is drawn from?

Millie: Imagine you put seven people’s brains, passion, and then their Spotify or Apple playlists together… That’s what the classic SVN sound is. It’s something that we’re so proud of and we speak about all the time, how when you listen to one of our songs, you’re like, “oh yeah, that’s an SVN song.” We definitely have a lot of inspirations, our main one being music and how we’re not afraid to dip into lots of genres and being vulnerable to knowing that sounds are so expansive. That’s where our inspiration lies, so many things from pockets of different genres, brackets, vibes, styles and messages and we are so proud of that.

Jarnéia: What’s amazing as well is when making music with these ladies, it’s not like, “how are we feeling? Should we make a song about love or heartbreak today?” and I’m sure we’ll make those songs one day and they’ll be absolute bangers, but right now everything we put out there is positive. And like you said, there is a lack of positivity out there right now and we want to create music with meaning and that you can truly resonate with.

Going into songwriting itself, was this something out of your comfort zones?

Aimie: We all do our own individual thing so at first we didn’t know how it would work with seven people. It’s a lot of people, you know, to write together. But it’s actually the most organic, magical experience writing with these ladies. It literally just comes out because everyone’s got their own little thing that they love and that they bring to each song, and it all kind of works together. You might think with seven women trying to write together that it’d be like too many cooks, but it’s the complete opposite, it just flows and we love it.

We must discuss your huge headline show at O2 Academy Islington – how are rehearsals going?

Millie: We had our check in Zoom meeting this morning to run through everything and I particularly was like, “oh, we’re actually pretty good?!” Like, we’re set. We’ve been rehearsing this since February and we’ve got everything on lockdown, from new music to a whole full on choreographed number planned. The harmonies are clean, the vocals are clean and it’s such a great feeling.

Grace Mouat: We’re also just so looking forward to sharing this night with everyone that has supported us from the beginning as well. I think you can get so caught up when you’re on a roll and are doing so many amazing things that you don’t get a second to realise that what we’ve done is pretty cool. We’ve written these great songs and hopefully inspired some people and we’re so excited to share this with our amazing fans and friends.

We’ve seen you ladies perform as a group both in theatre and through streamed concerts, but never a headline show before… What can we expect on the night?

Millie: We’ve got secrets in store! And a full on acoustic number of a song that we did… a certain time ago… in one show… That’s all we’ll say though, because you’ve actually got some iconic surprises coming your way.

Releasing 3 incredible tracks so far and performing a headline show at O2 Academy Islington – what’s next for SVN?

Lexi: Your ears are gonna get some candy! Let’s hope you’ve got a ticket and you are there on the night!

Grace: We’ve got another track coming out soon after our gig. Am I allowed to say that? I’ve said it now! And again, it’s another song that is totally different to anything we’ve ever put out. It’s so cool. We just want to keep surprising people and keep bringing out this cool stuff where people will be like, “oh my gosh, I can’t believe this is you.”

Millie: We’re sitting on gold at the moment, we’ve got things in the bank. It’s lined up and it’s ready to go.

Maiya: We’ve been sitting on these songs now for over a year, so for them to finally be heard by everyone is just going to be crazy. But we’re so ready.