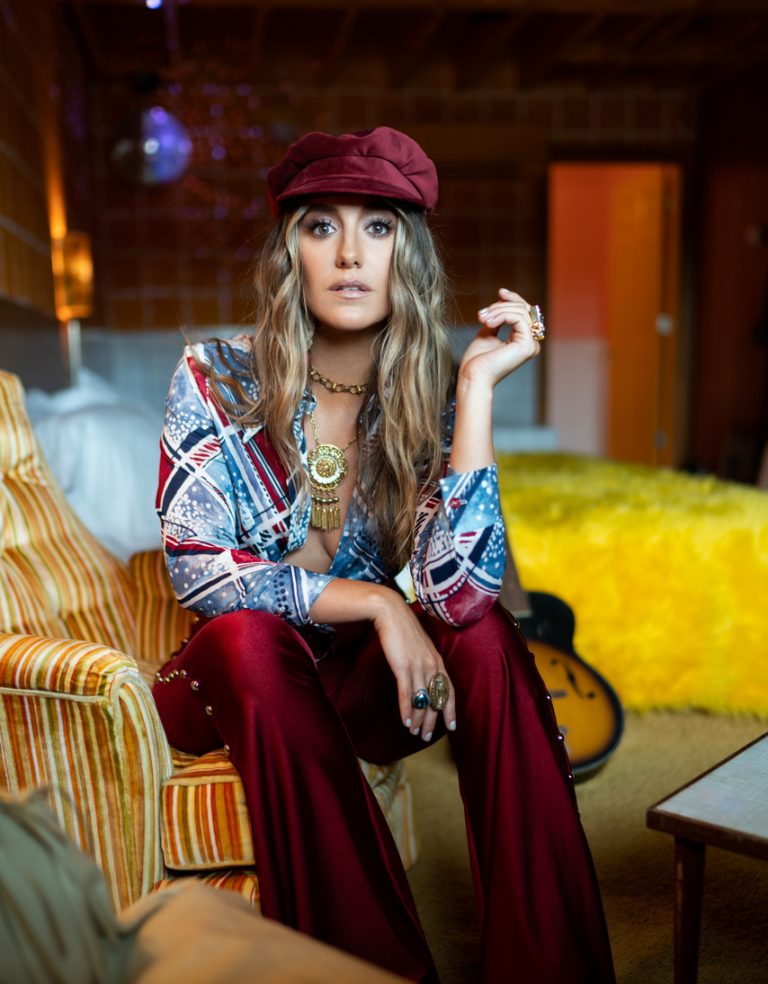 “I feel strongly about saying what you think, saying what’s on your heart, but also thinking before you speak”

This quote from Lainey Wilson, nicely sums up the Nashville breakout talent’s outlook on life, and ethos of new album, fittingly named ‘Sayin’ What I’m Thinkin‘. With a refreshing authenticity, Lainey Wilson is a down to earth country singer, but that doesn’t mean she’s not looking to the stars. Gaining support from industry juggernauts Billboard and NPR, Lainey all is too ready to take center stage and claim her rightful spot alongside country music’s finest.

Lainey’s been destined for a career in music from childhood, recognising her natural gift for songwriting at the age of nine. Ten years later, Lainey would pack up her things into a camper trailer and make the momentous journey from her small hometown in Louisiana to Nashville, with big dreams in tow. Fast forward again to 2020 and Lainey fulfills a her lifelong ambition to play the historic venue of Nashville’s Grand Ole Opry.

This year, Lainey releases her new album, ‘Sayin’ What I’m Thinkin’. The album is a collection of empowering songs that resonate with strength, channelled through a warm, organic sound that she describes as “bell-bottom country”. Lainey sets the tone with ‘Neon Diamonds’, a fun-filled rush of swaggering free-spirited attitude and party-starting energy with an accompanying visualiser inspired by one of her favourite programs ‘That 70’s Show’.

We speak to Lainey about her earliest memories of country music, working on the album with Grammy winning producer Jay Joyce, and what she’s most looking forward to in 2021.

Hi Lainey, thanks for speaking with us, how has your year been so far?

So far so good! Of course it’s been tough not being able to play shows and see my fans face to face, but I’m releasing my record Sayin’ What I’m Thinkin’  and am in awe of the excitement and support for new music from both my fans and music industry folks! It don’t get much better than that. 2021 is off to a great start.

Let’s start at the beginning, what gravitated you towards making music?

I wrote my first song at nine years old. It was seriously like songwriting latched on to my soul and wouldn’t let go. It became a part of me. My Deddy taught me a few chords on the guitar and then there was definitely no stopping. Writing music is a form of therapy for me and I’m blessed I get to put pen to paper for a living.

What was the first country song you can remember that really resonated with you?

The first country song that really resonated with me was around 1995 with “I Like It, I Love It” by Tim McGraw. My sister and I would fight over the one pair of headphones we shared and created a dance routine to go along with the song.

You mentioned you’ve been songwriting from the age of nine with mature themes such as whisky and cigarettes, were those early song lyrics influenced by life experiences or by your favourite musicians growing up?

My parents were completely shocked to hear the songs I wrote at nine years old about tequila and cigarettes; considering, we had neither in our house. I think I might’ve listened to one too many grownup conversations and too much Hank Williams Jr.

It must have been a massive decision moving from your small hometown to the big city to follow your dreams, what would you say you learned from that move?

I moved to Nashville when I was nineteen years old in a Flagstaff bumper pull camper trailer. Living in the camper for the first three years was a good indication that this journey was not going to be easy. I knew I was leaving behind the only thing I had ever known, but I knew deep in my heart I had to go. I learned how important it was to listen to your gut, roll your sleeves up, and as long as you don’t have a plan B, plan A will work.

Your single “Neon Diamonds” has such a fun vibe, it’s a song that instantly makes you want to get up and dance – what inspired the song?

Neon Diamonds was inspired by not taking yourself too seriously and living in the moment. Everybody needs a good reminder to be present and it’s okay to let your hair down. I hope people crank up this song to cut loose and have a damn good time.

Looked like you had an amazing time filming the video, did you come up with the concept?

The visualizer for Neon Diamonds was inspired by one of my favorite TV shows, “That 70s Show.” It doesn’t get much more fun than driving around downtown Nashville with a truck full of girls ready to have a good time!

The 70s aesthetic fashion in the video was a great choice, would you say that’s your favourite era of fashion? What inspires your style?

I describe my style as Bell Bottom Country. In simpler terms, I say it’s “country with a flare.” I am a sucker for everything throwback. Whether it’s clothes or songs, throwback things come with a good story… and I’m a sucker for a good story.

Moving on to ‘Sayin What I’m Thinkin’, what does your new album mean to you?

This album is who I am, what I want to say, and how I want to say it. I’ve been pretty much Sayin’ What I’m Thinkin’ my whole life so I figured.. why the heck not do the same with my album?! I hope people can dive into this record and feel understood, accepted, and walk away feeling empowered.

What was it like working with Grammy winning producer Jay Joyce? Is this your first time working together?

Working with Jay Joyce was an absolute dream come true for me. Talk about a bucket list producer. We developed a friendship before digging in and making music together. I totally think that’s why we worked so well together. He got to know me, my story, and my sound. Jay sprinkled his “Jay Joyce” fairy dust on top and truly did help me find my sound. This was the first record we made together and it definitely won’t be the last.

Besides the album release, what are you most looking forward to in 2021?

2021 ain’t ready. I am looking forward to making more music, playing some shows, and soaking in every single stepping stone. I know I’m just getting started and it’s going to be a crazy, fun ride. 2021 – I’m coming for you.