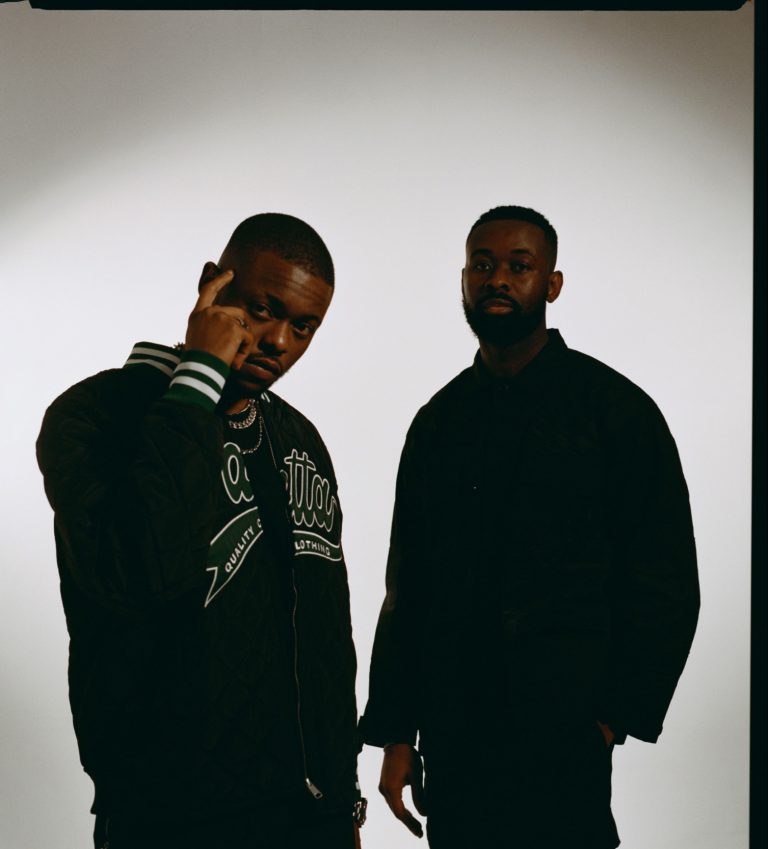 From Lagos to the UK and beyond, the soundtrack to your summer is here! Afrobeats artist Lojay and super producer Sarz, have combined their talents to create Afro-Fusion EP ‘LV N ATTN’. Having made a name for himself as the go-to producer, Sarz has truly earned his worldwide recognition, having produced for megastars Wizkid, Burna Boy, Skepta, Drake and Beyoncé. Now turning his attention to charismatic vocalist Lojay, the duo effortlessly glide through the five track EP, filled with infectious bouncy rhythms that transport us to the golden shores of Lagos. Collaborating once again with one of Nigeria’s brightest stars, Wizkid, for the only feature of the whole EP, Lojay and Sarz flex their ability to produce non-stop heavy hitters with not a filler track in sight.

Over Zoom we sat down with the Lagos residents to delve into their life as musicians and talk a little deeper about their collaborative EP. With an atmospheric video to match, ‘Tonongo’, the lead single off the EP was the perfect introduction to ‘LV N ATTN’, and if you dig beneath the surface you’ll find a depth of emotion expressed throughout Lojay’s seductive vocals.

As the world slowly opens back up, expect to hear ‘LV N ATTN’ EP taking over the bars and clubs for the foreseeable future.

What was 2020 like for you both? Did either of you use the time to push on song writing and creating new projects?

Sarz: Yeah, I had a lot of time to spend on myself, to grow and to work on my music.

Lojay: I feel as if it was an opportunity for music to be made which is what we have done!

What was your upbringing like, how would you say it has influenced the music you make today?

Sarz: So, I grew up listening to a mix of Afrobeats that my father loves so much, in the morning he would just play Fela all day or blues all day. So, I think that being exposed to Western music channels like MTV also influenced my taste in music. Growing up we were heavily fed the American culture, followed up by American music, British music and all that stuff and my Dad used to play Italian music a lot as well. I think it is a mix of all those elements.The mix of all the elements and different music made my sound unique. There is like a bit of everything in there.

Sarz: Personally, when I was growing up, I was not really looking for music. I would not listen to Fela at that age if it wasn’t for my dad, as he was the one always playing his music. But when I finally found a taste for music, I always loved hip hop, I was listening to the likes of DMX, Nas, and Jay-Z

Lojay: There was not a lot of music in my house apart from Christian music, like church and Gospel music. My Mum is very religious, so she used to play a lot of like Christian music. I started to pick up music from cartoons and the Disney Channel. A lot of the Disney songs really stuck with me, but I never really looked for music. I don’t even think I listened to Fela until my late teens. But when I did start picking up on music, like having a taste of American music, either American pop music or hip-hop music. When I really started to pay attention to Afrobeats was when I started to hear artists like D’banj, WizKid, Davido, and that whole generation of artists.

When did you decide you wanted to take music seriously and pursue it as a career?

Sarz: I have been doing it for a while, but I started making music professionally in 2007 and I’ve pretty much been doing it since then. I knew this is what I wanted to do when I started making beats for some of my friends and everyone loved the songs. I had so much fun making them, and I just thought maybe I should make this my career path.

Lojay: I first started music in 2016, but then I fully took it seriously in 2018 when I got back from University, I was just making music on the side. When I went back, I just decided this is what I wanted to do full time.  I did Marketing for my first degree and then Business & Management for my master’s.

As the lead single for LV N ATTN, how did this initial collaboration come together?

Sarz: We had been together in the house for a while and that is when we started working on the music. Tonongo was one of the first beat’s I made in that period. To be honest, I think I went to sleep, and I woke up the next morning and somebody was like ‘Oh, this is so fire you should finish it.’ That is my version of the story, I don’t know whether his version is different.

Lojay: It is literally the same thing, like the beat at night. And then he went into bed, and I just did what I could on the song, and he liked it!

Lojay: The EP will probably be out by time this article has been released. It is a project we basically worked on through the pandemic and created all the songs together. Altogether it is a five track EP, which includes different types and genres of music. There is something in there for everybody, that is the beauty of it. Something for every mood, while you are driving something for every moment even while you are showering.

Lojay: That was completely Sarz, who set it up. He invited me to the studio, which was amazing. We just vibed, made some music and then shortly Wiz heard the track and instantly wanted to jump on the song, and he did. That was a big vibe.

Sarz: It wasn’t planned or anything, but anytime me and WizKid linkup, we usually just play music we’ve been working on, it’s kind of like our way of checking up on each other. I played him some of the song’s I had been working on with Lojay off LV N ATTN and he just loved it so much at first listen. Wiz was like ‘Yo, I have to be on this song. Like I really must be on this song.’ That is how it happened, it was so organic and natural.

Do you guys separately or together, have anyone in mind you wish to collaborate with in the future?

Lojay: Me personally, I would say Drake

Sarz: I would say The Weeknd, he is so special because throughout every album he shows a lot of growth, he is so innovative with his visuals and music.

What advice would you give to future creatives or musicians?

Lojay: Just keep going and keep working, that is the only thing you can do to be honest, everything is in the universe’s hands

Lojay: I just want to make music and put out as much music and see what the universe brings to me. Performing live is going to be an amazing experience too if I am honest.

Sarz: Obviously put out more music. I have some singles from my own album coming out as well, so I am excited for that. I am also looking forward to DJing at some live events.

Give me three words you would use to describe your musical style?