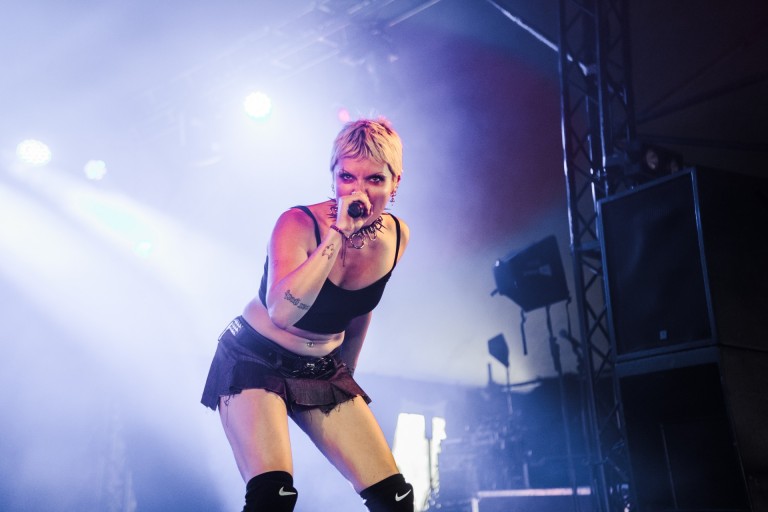 Looking Back at Reading Festival 2022 | ICYMI

Having chanced the crazy weather warnings of rain and luckily being blessed with somewhat a mini heatwave instead, we were in for a treat at Reading Festival 2022. For three days we had one agenda, to enjoy live music from our favourite musicians, beloved nostalgic artists to including newer artists gracing the stage for their first time.

Let us take you back to summer, and give you the low down our festival highlights and performances we really enjoyed. One of the great things about being at Reading Festival is the variety of stages it has to offer, spoiling us and thousands of music lovers for choice. So naturally, we sprinted around seeing as many performances as we could, and were lucky enough to catch up with some backstage – read on for our mammoth weekender breakdown.

First up we headed to see Witch Fever on the Republic stage. Their presence on stage was incredible, with super heavy headbanging riffs fuelled and rhythmic lyrics filled up the tent gradually accelerating to mosh pits.

The band mentioned to us that “We didn’t expect it at all, we were optimistic – we didn’t expect it like that, I think the mosh pit we had in that performance was the biggest we’ve had so far!” Lead, Amy Walpole continuously involved the crowd within the performance encouraging them to sing and dance along, at one point she even joined the crowd while performing and commented at how respectful the crowd were towards her – “well I got in and as I got into the crowd, they all just went mental but I think they saw that I ran in the opposite direction to not get caught up in it. Then they just kind of like calmed down and read my body language, sometimes crowds don’t, but most of the time crowds like can read my body language. and I don’t want to be like grabbed and picked up and stuff. So yeah, they made space for me which is nice. ”

The second band we decided to watch that day was Wallows, since we last spoke to them (read here), the band have been working even more on new projects. The band played the main stage for the first time and it was also their first UK festival. Catching up with them after the show, we spoke about the differences between UK and US audiences. “I think one of the big differences, I think in the US, like, during big moments, instead of mosh pits or jumping, or whatever, it’s like phones come out. And here, honestly, I didn’t see many phones at all. And it’s just so impressive and refreshing”

Despite the jet lag, the band gave us an incredible performance, treating us to older classics from 2017, up to their fresh releases. Starting the set with ‘I Don’t Want To Talk’ the crowds response was cheerfully welcoming, and matched their uptempo energy. Seeing such a hyped up crowd has even inspired them to create more music, “after seeing the crowd respond to certain songs. It’s like, ‘oh, man, I want to write another song like that.’ We never want to make the same record twice. So whatever that means, we’re always going to figure out how to switch it up. Whether it be just the way we approach it, or how it sounds.”

Their cover of ‘What Makes you Beautiful’ by One Direction definitely stood out to the crowd, with fans singing along at the top of their lungs. Speaking to the boys back in pre-pandemic, they mentioned that they’re always progressing and want to continue making new songs, keeping their set list fresh – and during the lockdown they did just that, releasing many new fantastic singles. Wallows are currently working on more projects which are more raw and authentic than ever before, confidently paving their own unique path on route to their third album.

Even before heading to the dance tent for Madison Beer, we could see she’d be a favourite amongst the festival goers, the love from the crowd was immense, but surprisingly, this isn’t something Madison had expected – “I had no expectations. I’d never been here. I honestly don’t think that I was going to fit in, considering it’s more of a rock leading festival. So I figured no one was gonna come – but it was packed man, it was unreal. I’m blown away. I’m honestly still processing. It was amazing.”

We were lucky to be at the side of the front stage watching her entrance, which was like something from a movie, flawless and sultry. Singing her popular hits including ‘Baby’, ‘All Day And Night’, ‘Selfish’ and ‘BOYSHIT’, Madison had some truly dedicated fans, waving, crying and singing along to every note, and Madison returned their love with endless gratitude.

Let’s not forget Madison’s amazing outfit she wore on stage, we had to speak to Madison about the process for picking performance outfits – “Me and my stylist, we are really collaborative – I send her inspo pics or moodboards. With this especially we wanted to kind of piggyback off the tour and then put it to bed after this. This is the last festival/show that I’m playing for a while. So we just we just wanted to do something that felt like a bit of an homage to the tour.”

Mind you, it was a hot 25 degrees that day, and in addition to some impressive choreography, Madison did share that she had felt faint at some points. Thankfully their was a fan and Madison dug deep to give us an unforgettable experience, like the professional she truly is, and was able to cool off after the show. Madison didn’t give much away about what she’s working on, but we know that it’s going to be as catchy and heartfelt as ever.

Having had the opportunity to chat to Cassyette in the past (see in Noctis XX), and catching her performance at The Great Escape we definitely had to see her playing the biggest festival so far that is Reading. However, this isn’t her first time playing the festival, in 2020 she played with Frank Carter And The Rattlesnakes. We caught Cassyette while feeling peckish about what to eat, and feeling a solidarity with her particular eating habits – we got out some trusty lentil chips and shared them over conversation – “I’m so fucking nervous, I did a performance for one song in the past with frank carter and the rattlesnakes, this festival is such a big thing for me like I’ve always been here as a fan, so I’m like don’t fuck it up!”

Naturally Cassyette’s set was jam packed with fans at the Festival Republic stage, this is no shock, Cassyette’s performances are always top notch. Even though she was super nervous beforehand, she used those nerves and adrenaline to her advantage turning into the most confident version of herself. We’re delighted to hear she’s working on more new things too, with a heavier sound to look forward to. Writing from the age of 13, at first Cassyette wasn’t sure how to get into music, teaching herself most things while making music with a neighbour. She goes on to tell us “I think it’s the right time now, I wanted to find my sound, I think if you’re going to do an artist project you want to be sure in what you’re putting out there and I guess I wasn’t sure of it and now everything just makes sense.”

Reading Festival is primarily a rock festival so Bring Me The Horizon perfectly fulfills that need. Having played the festival on many occasions, this time felt difference, they nailed it. We were introduced to an amazing interactive visuals screen scanning the audience with a robotic like voice interluding within the set – giving it the most cinematic effect of all time. As they performed ‘Can You Feel My Heart’ little pink hearts exploded out from the stage cannons, and in that moment you could tell a lot of work had gone into making sure the set looked 110%.

The one and only Ed Sheeran shocked fans as a surprise guest, and performed a heavy rendition of ‘Bad Habits’ – an exciting collaboration fans had been waiting to hear again since the Brits Awards. Oli Skyes did not shy away from showing the utmost respect and love for his fans during the set, he tells them “You guys saved my life so many fucking times; you don’t even know.”

Our favourite moment was watching Oli Skyes make his way down towards the fans while singing ‘Drown’, giving the most memorable experience – hugging them, giving them high fives and even kissing them on the cheek. It was clear to see how much that means to the fans who had lined up for hours just to get a glimpse of the band, to then actually interact with Oli himself.

The greatest thing about Reading Festival is you never know what set you’ll be walking by – even though we had a schedule to stick to, it was almost impossible when faced with so much talent, we wanted to see the whole lineup! Bring on Reading Festival 2023!