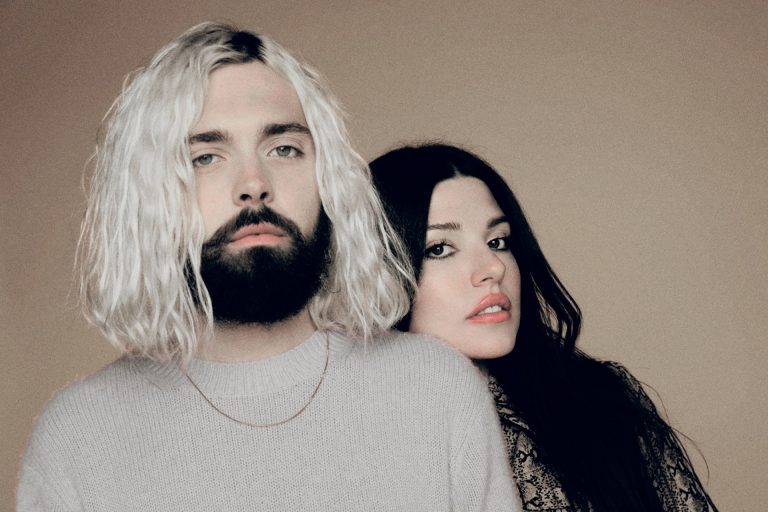 The story of flora cash, Cole and Sphresa, impersonates a modern time romantic movie. Soundcloud’s connectivity brought a man from Minneapolis and a woman from Stockholm together over their passion for music and each other. Not long passed until their DMs turned into flirtatious love letters.

Today, Swedish–American pop duo consisting of Shpresa Lleshaj and Cole Randall is behind the 2018 global hit ‘You’re Somebody Else,’ a track that took the form of their ‘creative offspring that’s grown up, left home, and started a life of its own.’

After years spent on the road, with the release of ‘Baby, It’s Okay’ right when the pandemic hit, the duo admits ‘getting permission to breathe’. When ‘Baby It’s Okay’ dropped, it became a punctuation mark after an era of sacrifices and non-stop grind.

The new single ‘Soul Mate’ encapsulates everything flora cash stands for. As you will discover in our conversation, flora cash often gets inspired by the concept of time, not enough of it, and going back. With ‘Soul Mate,’ they capture the feeling of true love, timelessness, and love transcending time.

Subjecting to a burnt-out, flora cash took an opportunity to ground themselves and work slower and more patiently. Their upcoming project will embody just that.

Where are you based at the moment? What have you been up to?

Currently we’re at Shpresa’s parents in south Sweden enjoying the summer. We’ve been grilling almost every day which is a little harder to do when we’re at our apartment in Stockholm. We’ve been here for a few weeks trying to wrap up the next batch of songs.

Could you individually elaborate on how you got into music and songwriting?

Cole: For me it started when I was a little kid making homemade drums out of coffee cans and writing songs that I would keep in 3 ring binders. I was never formally trained in an instrument but I always had a knack for drums. A friend eventually asked me if I wanted to start a band. I ended up drumming a lot with him in my grandparent’s garage. He played mostly power chords on the guitar and it sort of inspired me to pick up the guitar because I thought, “hmm what he’s doing doesn’t look that difficult.” And of course, it wasn’t… because it was power chords. From there I got really passionate about the guitar and it wasn’t too long before I started singing and writing over what I was riffing.

Shpresa: I was never trained on an instrument but I always had a passion for singing and for poetry. When I was really little I used to write poems and then stand up on a table in front of my family and recite them. Later I formed an all girl singing group with some friends of mine and we used to perform for anyone who would listen. We called ourselves the Dream Girls. Haha. Later I started to write more seriously with a producer friend of mine who would send tracks to me and I’d write toplines. Those were the tracks we eventually put on SoundCloud, which ultimately led to me discovering Cole’s music.

How did you guys meet?

We met on SoundCloud where we had each been posting music. We each had a small but dedicated audience there at the time.

Why do you think you were drawn to one another?

We were primarily drawn to each other’s music at first. The intention at the beginning was to simply collaborate over long distance (between Minneapolis and Stockholm) but as we got to talking more and more, we realized we had a lot more in common than just our music taste. It wasn’t long before we were video chatting as often as we could every day for 5 months. Music took a backseat during that time.

What were your conversations like when you first met in person?

Sort of a continuation of the conversations we were already having for the prior 5 months. We really got to know each other so well over video chat that we pretty much just picked up where we left off.

Do you remember in what moment your personal relationship started to grow into a romantic one?

It really started while we were still in the “exchanging DMs phase.” We were so upfront and honest about ourselves in writing, that things kind of snowballed quickly. The messages definitely got more and more flirtatious quickly. Ha. Eventually they started to look a lot like love letters. And this was all before we started video chatting.

How did you guys decide you want to make music as s duo?

That was always the intent from the time we met, basically, so that it was kind of a foregone conclusion.

They’ve changed a lot over the years as the circumstances of our lives and careers have changed. Sometimes we start with a guitar riff sometimes we start with just a melody. A lot of times nowadays we work separately to start with and then work together as an idea has already taken shape. It really just depends on how we’re feeling. In the end it’s all about the end result: a song that means something to us.

What is ‘You’re Somebody Else’ about? Is it based on a real life experience?

At this point we think ‘You’re Somebody Else’ is about a million different things. If we think of it as a ‘creative offspring’ of ours: the song has sort of grown up, left home and started a life of its own. So it’s sort of like: who are we to say what the song is about anymore? But for us, the genesis was a really dark time we were going through mostly centered around anxiety. And the basic gist of it was: “I don’t recognize the person I see in the mirror; this isn’t me; if I let this consume me I will be somebody else.”

Why do you think it’s so timeless?

In the end we think it’s the lyrical content. It seems to strike a chord deep within people. And it somehow achieves that synthesis of universal but deeply personal. So each person feels that it is speaking specifically to and about the most private part of their psyche but at the same time it does this for large numbers of people. It’s just another example of how very similar our struggles are and sometimes we need a song to give voice to that.

You released ‘Baby, It’s Okay’ just before the whole world stopped, what does this record encapsulate for you?

It feels like something from another time in some sense. Everything we expected about the trajectory of the world and our lives when we wrote and released that record was turned upside down in a matter of months. For us the record reminds us of all the work we did and sacrifices we made to build our career the several years prior. And the release of the record right when the pandemic was beginning sort of put a punctuation mark at the end of that phase of our lives. And now that our career, after those years of grinding, was more or less self-sustaining: releasing that record when we did also gave us permission to breathe, come back to Earth and refocus on the core of what really matters and why we do what we do.

As we were all stuck at home for months, what changed in terms of songwriting and making music?

We got back to the basics in a sense. We weren’t focused on the next tour or the next radio promo or the next photo shoot. We were there, alone, together in our apartment with no-where to go, no one to see and made music simply because that’s what we actually love doing. So our next album is really going to reflect that.

There were times where it was difficult but overall we found ways to make it enjoyable. Like a lot of people we also picked up new hobbies (and rediscovered old ones.) We caught up on some much needing reading. We biked a lot. As mentioned above: we were so burnt out from years on the road and being rootless that for us it was actually an opportunity to ground ourselves, take things a little slower and work a little more patiently.

Are you inspired by different things/themes?

We take inspiration anywhere we can get it. Everything has the potential to be inspiring if everything aligns just right. A major theme that inspires us generally speaking is Time; the feeling that there is never enough; the wish that we could go back and fix certain mistakes; the bittersweet feeling of moments gone by.

What spurred the idea to write ‘Soul Mate’?

It wasn’t so much an idea to write the track as just a feeling that we wanted to capture. It’s the feeling that true love is timeless; deathless. The song also kind of assumes a reincarnational view of reality; the idea that our individual essence survives death and that our essence has its perfect counterpart which tends to join us on each Earthly sojourn.

Who’s on the cover art for ‘Soul Mate’?

That’s Cole’s grandpa (Mark Randall) and grandma (Peggy Randall.) They both passed away somewhat unexpectedly within a short period of time of each other and we were both very close to them. We’ve always felt they were soul mates and wanted to honor them with the cover art.

What do you miss the most about being on the road?

First and foremost, we miss meeting fans. We always made a point to meet as many fans as we could after a show and the energy was indescribable. Another thing we really miss is falling asleep on the bus after a show and waking up somewhere new everyday. We really miss that feeling of adventure.

Could you share what you’re working on at the moment?

We’re working on the successor to ‘Baby, It’s Okay.’ We’ve got a collection of tracks (including Soul Mate and the other songs we’ve released this year) that we’re really, really excited to put out. Just a bit more chiseling before we’re ready to make an official announcement. 😉