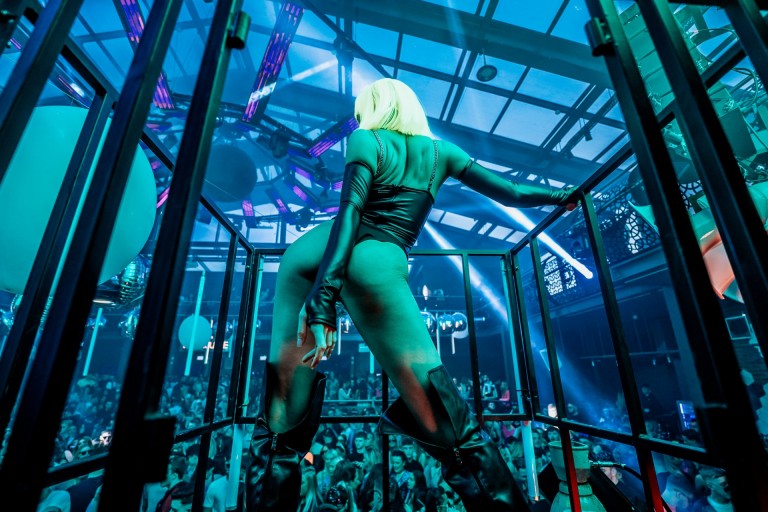 Last weekend, George Mensah and Sammy Porter released the new tune “No Good For Me” and hosted an unforgettable party to celebrate via their label called LoveJuice. The collaboration debuted the tune during the sold-out day party at Studio 338 and it was a house-smash, to say the least!

LoveJuice, which was founded in 2007 (before the Metaverse) has grown into an in-demand worldwide event brand and label by bringing together like-minded individuals who want to party in the hottest places while sharing a passion for dance music. Previous sold-out gigs have taken place across London at venues like E1 and Electric Brixton. And, have included Secondcity, Martin Ikin, Joshwa, Camden Cox, Saffron Stone, Max Chapman, and others. This upcoming year, they will also host stages at the Sundown and Dream Valley, some of the most highly-anticipated groovy dancey festivals.

Studio 338 based on the Greenwich Peninsula, includes one of the largest terraced arenas in Europe and was a spectacular spacious venue for LoveJuice last weekend. The lineup for the day included (in order) George Mensah, GW Harrison, hitty, Joshwa, Loéca, Rennie Peters, Sammy Porter and Secondcity.

Starting the performances saw Rennie Peters take to the decks to perform some of her best-liked tunes followed by Northern Ireland/well-known Ibiza resident Loéca. After, the London based garage DJ/producer Hitty took to the stage for some afternoon delight.

Joshwa then played some of his recent adored tracks including ‘My Humps’ which was released in October. Then followed this with his most current track ‘How We Do’, which sent party-goers into a bassy trance.

Neon-haired dancers caught the eyes of many of the ravers as their sculptural movements symbolised the beats from the decks. Confetti and smoke machines were not shy on the night, we witnessed LoveJucie founder George have a blast firing them at the crowd!

Mid-dance, London-based raver Luke from Sheffield speaks about the night saying “Joshwa is an amazing, rising UK DJ at the moment, seeing him today has made the start of summer for me.”

Secondcity were next on the lineup and performed renowned sounds such as ‘I Wanna Feel’ and ‘All I Want’ before Sammy Porter, GW Harrison and headliner George Mensah finished the day with scenes upon scenes.

While operating LoveJuice, George Mensah collaborated with Joel Corry, MNEK, Eden Prince, Secondcity, and others, as well as releasing on Nervous Records, Simma Black, and his label, which received support from Pete Tong (BBC Radio 1), Kiss FM, Charli Tee (BBC Radio 1), and others. Meanwhile, Sammy is expected to add to his over 75 million streams with upcoming releases on Armada Subjekt, Catch & Release, and others.

Overall, LoveJuice is the place to be for house and electronic lovers, making feel-good really… FEEL GOOD, as they bless our ears with beats and allow our bodies to manoeuvre on the dancefloor.