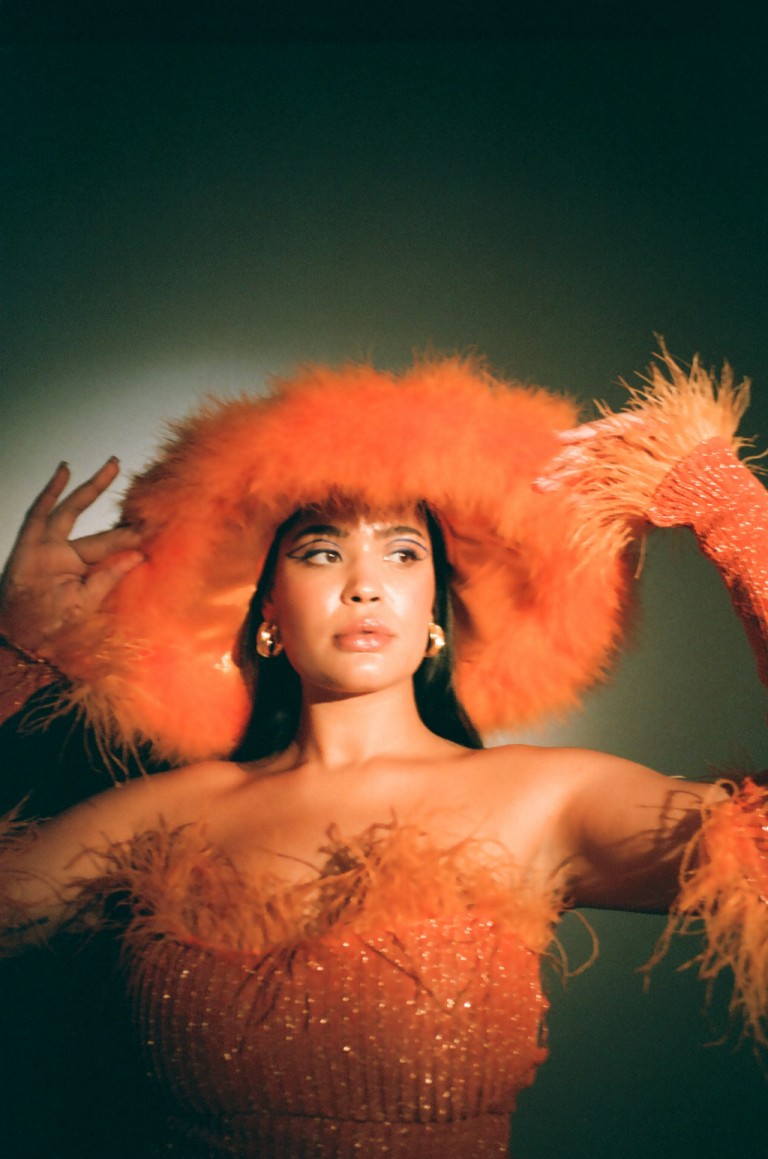 LUCIIA is an emerging R&B star with a big UK fan base. It’s been a year since she debuted her breakout song, BRB, and the time has come for her first 5-track EP 365 to hit your ears.

Growing up in a musical household affected LUCIIA’s early years and fueled her desire to pursue a musical profession. LUCIIA’s skill has carried her beyond her Swedish boundaries, where she has collaborated with Grammy-winning composers and producers in LA and London. The lyrical tone and sincere poetry of LUCIIA have been known to infuse any room with warmth, honesty, and irresistible shivers.

The first track from LUCIIA’s debut EP, ‘BRB feat. Shawn Butler & Joel Malka,’ was released in May 2021. ‘CLEAN,’ her second song, was released in September 2021 and played during her first headline event at London’s Notting Hill Arts Club. The focus track, 365 was created during a dreamy camp on an island in the archipelago of Stockholm during the Summer of 2021. Penned and produced in Stockholm with producer Mark Phase and songwriter Naomi Vaughn. “Naomi and Mark carry great integrity and an understanding of my personality in a way that made me feel comfortable with opening up new layers of myself and exposing a part of me that I needed to explore to express my exact emotions at that exact time”

LUCIIA remarks on the featured song ‘365’, which is about the frantic feelings felt when going through a heartbreak and having no control. You are just left with the agony of emptiness. This single foreshadows the overall concept of the EP, which involves going through the difficult healing process of a breakup. “What is time? They said that time heals. 365 days went by and nothing. I still miss you; I still think of you & I´m still all alone, waiting. For nothing. What do you do with emptiness? Wait for time to pass. Sometimes even for years waiting for time to heal.”

Another track, ‘WHAT YOU DO TO ME’, was created in London, produced by Jay Keyz and written with Yolanda-Maria Ried. ‘REST IN PIECES’ is the final track missing to perfectly complete the EP. “I met up with Naomi and she really wanted to show me something she had been working on and had me in mind for. She literally put words on emotions I had been trying to find for months and I could relate to every single word she wrote. That was the moment I realised my EP was complete.”

365 was released 30th of June and with its international sound, this EP is resonating with a range of audiences across the R&B genre and the breadth of today’s global music culture. Noctis Magazine discusses all things 365 with LUCIIA and get to know this artist down to her core.

Your family are said to be a driving force in your music, can you elaborate on this and the influences they gave you?

It was inevitable. I was born on stage and in the studio. Both my parents have music in their history, my father is a lead singer in a Cuban band and my aunt is also a singer.

I wasn’t able to fall asleep unless surrounded by music of some kind. I have more memories from studios and touring than other common childhood activities.

The Cuban culture and my visits to the island have given me a better understanding of my musical talent and my rhythmic roots.

For people who are unaware of your music, in your own words what is the sound you create?

An emotional frustration blended with a twist of hope. I guess that’s why they call it Rhythm & BLUES.

You have worked across the scene with other international artists, who have been your favourite collaborations?

I’ve had the privilege to create with so many different musicians. I learnt a lot about myself and my abilities writing with Camper, Price & Shawn Butler during a camp in Stockholm. Shawn ended up as a feature on my “baby” song BRB produced by Joel Malka.

I haven’t released with Camper yet, but the moment I heard the beat from our demo on H.E.Rs album I felt this was so special and it made my vision feel more real from that day.

If you would’ve told me back in the day that my first feature on another artist’s project would be Sneakbo, I honestly wouldn’t believe it. We had so much fun making the Summer tune in Stockholm and filming the video in London.

I read it’s been a year since you released your breakthrough single, how has the time creating been? And, are you excited about your recent EP release?

As mentioned above, BRB was a special song made during a special camp. The creative process has been important on several levels, every session has made me grow as an artist and equally important as a human. Every person I create with teaches me something new about life as well as myself. I have recorded more than 100 songs, I’m proud of each one. Like a diary. Naomi Vaughn has been important to my process, she can read my mind and help me put words to my exact emotions.

I have never been this excited, was supposed to release an EP right when the pandemic hit. The break from everything made me realise I wasn’t done and the process started over. In other words, it’s been overdue…

An end and a new beginning.

And, how did the name come about?

Song 365 embodies the entire EP, the name of the song was naturally there when we finished it. You might not reflect on the fact that a year consists of 365 days. When you deep it, That’s A LOT of time.

After listening back to the song It became even clearer to me how much time I had “wasted” on a relationship constantly digging me into a darker place.

Which are your favourite tracks from the album and why?

365 and REST IN PIECES. – concluding and putting it to an end.

How do you want people to feel when listening to ‘365’?

Whatever they might feel. Music is personal, when it’s yours it’s no longer mine.

You have a few live performances this year, can you let our audience in on what to expect at these shows?

I’m doing my first US show in Miami in November, expect real singing..

To have had the opportunity to do my first headline show with Dr Martens at Debaser a month before releasing my debut EP, to perform Brilliant Minds (a prestigious closed event that hosted Alicia Keys, Barack Obama, Usher, Depak Chopra, Naomi Campbell etc, to be a part of the opening of Fotografiska exhibition for Terry O’Neill and to perform R&B Klubben Trädgården all within a month was a result of my lifetime preparation.

I would never take opportunities like these for granted and I’m beyond grateful but it honestly felt like “finally”.

I have a completely different story to tell, I’m working on it and have finally found peace to write about what I never thought I would be ready to share.