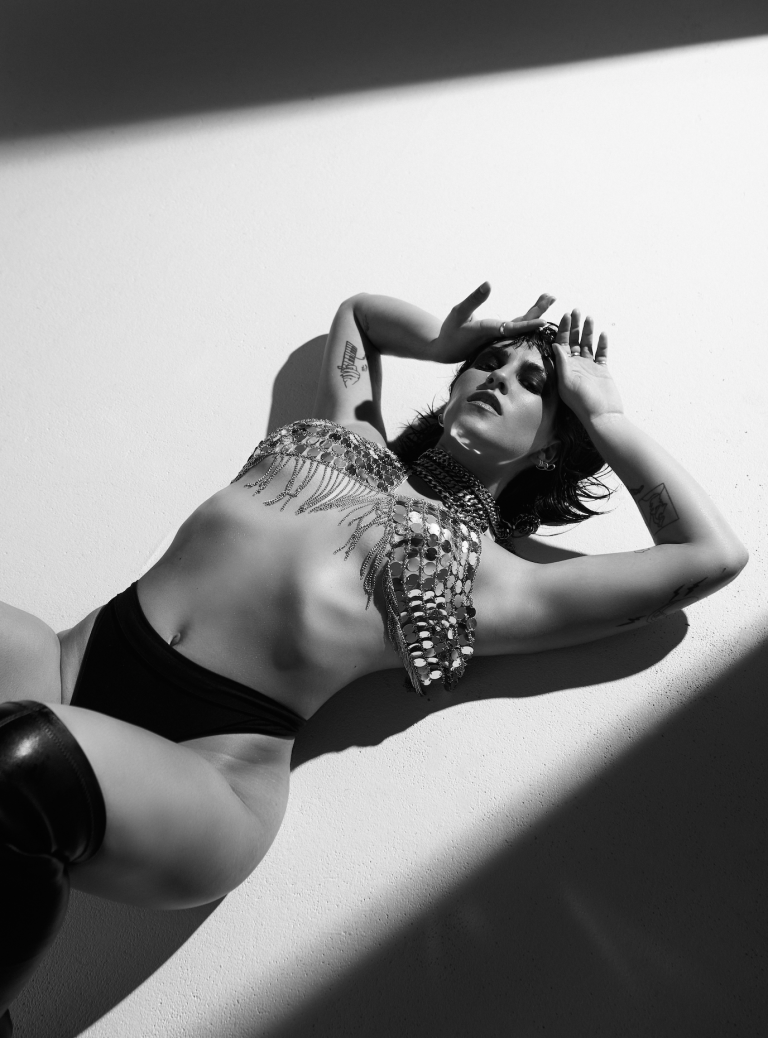 Von is the sex positive artist, advocate for female pleasure and all-round ground breaking feminist icon making waves in the music industry. The creation of ‘sex positive synth pop’ with musical influences such as Grimes and Charli XCX incorporates the use of vibrator technology developed by Lioness that tracks the users orgasms and shows the data in waves on an app. Von takes these waves and turns them into intrinsic rhythms layered with pulsating beats and mesmerising, radiant ascensions. The subtlety and power in creating music using vibrators and climactic waves of pleasure is an inspired force in the fight to open up a discussion about female pleasure. Music is so diversely enjoyed, incorporating an almost hidden meaning into the songs is an inspired way to breach the gap between pop culture and politics.

We spoke to Von about her new track ‘Last Night’, her work as an artist, the discourse and stigma around female sexual pleasure and what she’s doing to tackle it.

The use of vibrators to create music is such an inspired way to open up a discourse surrounding female pleasure. What initially inspired you to experiment with this medium?

Thank you! My background is in production, so I’ve always been a sound nerd at heart. I would constantly just throw ideas at the wall for how to make shit sound weirder and how I could source waveforms. I came across Lioness and saw that it recorded contraction patterns, so I hacked their tech to extract my own waveforms and input them into Serum, a wavetable synth. From there I would just manipulate the parameters to make different sounds and now it’s how I make all of my music. It’s obviously turned into way more of a political statement, but it really just started as a way for me to nerd out music production wise. It also really helped me confront my own discomforts with masturbation that have been so engrained since I was a kid. I had to get over that pretty quickly as it became a staple of my artistry haha.

What kind of response have you faced from your work?

Growing up in such a traditional town I always had a problematic relationship with sex and my own body, so I think making music for me really started as a way to work through that. Naturally it became a space for me to express all the shit I felt got so suppressed for so much of my life, and to make a world that was free of judgement or stigma. Sex is normal, masturbation is normal, sex ed should be free and available everywhere. That tends to be what I make most of my music about just because I feel so passionate about it. I see the differences in myself since becoming more comfortable and open and all I want is that type of relationship with yourself for other people.

What do you hope listeners will take away from your music? Is there a specific message you want people to hear, or do you think it’s a more individual experience?

I think once you give art away it’s no longer yours, it belongs to the listener. Which is exciting, because it means each person gets to have their own experience. But I can only hope it gives people what it’s given me, a foundation of self confidence, a newfound love for my body and my sexuality and a sense of self I feel proud of.

Looking back, was there anyone that you found particularly inspiring as a sex positive icon that inspired you on your journey to creating your music?

Peaches and Bjork were artists I always looked up to as a kid. Femmes making music that went against the grain both sonically and conceptually was something I thought the world of. SOPHIE, Grimes, Pussy Riot etc. are all huge inspirations to me currently. They made space for the other femme weird art kids to feel like they belonged. Those artists gave me the confidence I needed to really say fuck it and just make the shit I wanted to make.

Thank you!! It was awesome, we shot the whole video in like two takes on an iPhone. It’s always super special when you come at projects as two artists taking equal parts. I didn’t want it to feel like it was only mine just because it was my music video. I wanted us both to have creative agency and feel excited about the project. The end result was a really beautiful merriment of both of our styles which is all I could ask for when collaborating with other artists.

How did the opportunity to shoot with Milly Himmelstein come about? Did you have a specific vision for the shoot?

Milly’s a good friend of mine and we’d actually never shot together before. We finally were like we need to book a day to just fuck around in the studio, so we brought a bunch of random pieces from both of our closets and styled it ourselves. We got all of those looks shot in an hour and a half. It’s super empowering and rewarding hustling projects with friends, it reminds me how capable we are and makes me feel super lucky to be surrounded by so many overqualified women in my life.

I read about your political work on Vondom Labs. The diversity of subjects you’ve covered is incredible. Can you tell me a bit about how you want to progress with this?

Artists, and female artists specifically, are constantly put in a box. For me it was “the girl who makes music about sex”. I was told by so many crusty label dudes that being an academic and an activist was too confusing. Vondom Labs serves as a place for me to tap into all of my dimensions as an artist and really feel seen. I write treatments, produce videos, write essays, direct marketing rollouts, spearhead fundraisers etc. for myself and a myriad of other artists and members of the sex work community. I never want to feel like I have to be a one dimensional person to fit a mold the music industry constantly forces women into. I want Vondom Labs to serve as a space for resources, community and comradery for myself and members of my communities. Whenever I’ve felt discouraged, whether it be from a dude in a suit or a catholic mom, I’ve looked to my community for support and they’ve held me up every time. I want to host space to give that back.

Your new single ‘Last night’ has just been released, could you explain a little about the inspiration behind this particular song and how it came to be?

Yes!! I feel like I’ve spent so much of my life teaching skill sets I was expected to know by 13 to men over 30. I was in the thick of quarantine, and was loosely in and out of a relationship with a guy who was literally 10 years older than me and couldn’t believe how much basic emotional competence I had to teach. It’s wild because I’ve never had a nonmale friend who hasn’t had the same experience, whether it was a parent or a sibling or a teacher or a coach or just a platonic male friend. I wrote this song just out of frustration and kind of as a promise to myself to stop wiping men’s asses for them. I’m really so grateful to have so many men in my life who are actively working to change this, but it starts with them acknowledging that it’s not women’s job to teach them how to break this cycle. I made the video with one of my best friends Farah, and we literally broke into an apartment building with no real permits to shoot in the middle of the night. Having both been in so many male dominated spaces in entertainment and watching teams of 30 plus people and budgets way surpassing anything I could self fund still fumble shit made pulling this off together completely independent really rewarding.

As both Von the person and for Vondom Labs, it looks like you’ve got a lot of exciting work on the go. What have you got planned for the upcoming future?

I was so lucky that during quarantine I lived with so many creatives and we got to make so much art together. I’m so excited to release all of the songs I’ve written and videos we’ve made this summer. It’s been a labor of love as always, but as an artist nothing makes me prouder than to think of 15 year old me, who was too scared to carry a tampon in public, now watching me make music with a vibrator and work on projects with people she’d freak out over, let alone know that they’d be her friends. Lots of gratitude and new music to come 😉