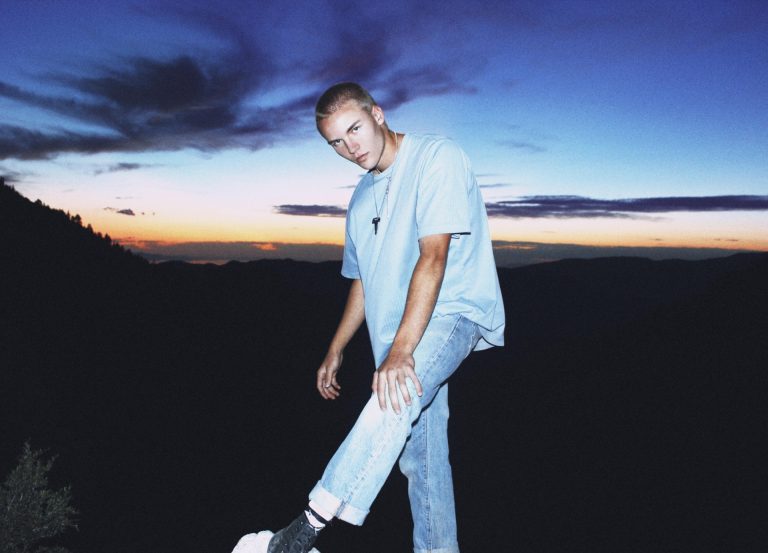 It’s only been a year and a half since his first release of ‘D!OR LIFE’ and the 19-year-old MASN lands a remix by Trippie Redd for his breakout hit ‘Psycho!’. The young artist from Eagle Mountain, Utah, found his way to music after a broken collar bone that unfortunately ended his football career. For MASN, there is a silver lining, as his talent is undeniable.

Before elementary school, when he got his first iPod, “I would steal my dad’s CDs and play them, it was mostly Metallica and other rock,” he says.  Having music in the back of his mind, MASN always dreamt of getting to play football at college. However, an unfortunate injury made his dreams disappear:

“I broke my collarbone Junior year, and it slowly ended any aspirations I had to play at the next level, even though I tried to fight it. At the end of high school, I just randomly decided I needed a new “thing” since I no longer had football. I googled recording studio and went, but really wanted to be successful, and kept going, and kept improving. I recorded my first ever song “D!or Life” and released it right after on all streaming platforms. I did that with the next five songs I recorded as well. A year and a half later, we’re here”, he explains how he found his way to music.

MASN’s musical journey may not be as elaborate as others, but the growth is definitely there. So far, through ‘trial and error’ as he called it, MASN found his sound inspired by ‘nature, indie rock, and hip hop.’ When it comes to his lyrics, he lists things that influence him the most: “Feelings, people, places, cars, nature, money, fashion. My lyrics sometimes are about one thing or experience, but most of the time, they are a collage of a bunch of different experiences, feelings, and things”.

Especially during these dark, confusing times, it is still imperative to stay appreciative of our surroundings. MASN plans just that through his music: “I want it to represent a refreshing, vulnerable, intimate world based on themes and imagery of nature. This world is a safe space for anyone to enter through the music,” he shares.

While going through MASN’s discography, I wondered what his intention behind using exclamation marks in the song titles was. As he explains, aesthetics wasn’t the one: “The “!” signifies two things. Opposition, and living life like “!”. I have a tattoo of an exclamation point on my waist. It reminds me to live life excited and with youthful high energy. It represents opposition and duality because a ‘!’ is the opposite of an ‘i.’ This reminds me even if I’m having a bad day, there will always be another good one, and opposites have to exist in the world, or we’d have nothing. Another play on opposites is the title of my first song ’D!or L!fe’ or ‘Die or Life’”.

As you may realise, most of his artwork is a very striking image of nature. The one that stood out for me is for ‘Valium.’ Right away from the title, I was intrigued. MASN clarifies the meaning: “Being in love. Val!um can be described as an idyllic vignette of young love”.

With his breakout hit ‘Psycho!’, MASN fancied a lighter subject and sang about ‘a collage of a few different stories, the main one being an impromptu house party that got a bit out of control.’ Not every spontaneous party receives over 47 million streams and a Trippie Redd remix on top. As a fan since the 10th grade, MASN ‘felt that he would bring the right amount of energy to a song like “Psycho!,” he did just that’.

MASN admits to sitting down on tons of unreleased music that he’s eager to put out. He also hints at an EP that may be on the way. Support the young talent by streaming his music, and let’s see what else MASN will have in store for us.