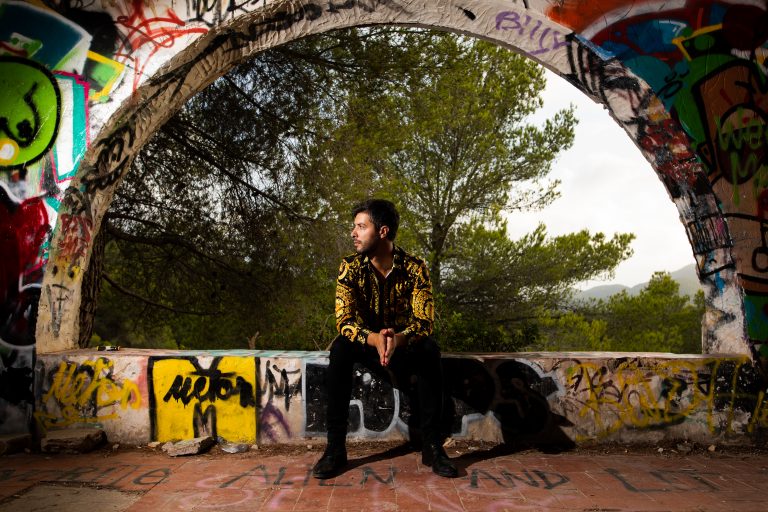 “what sorry, just quickly, what if it’s…”

You know the rest. Go on, think hard. This phrase took over all radio stations, party playlists, every streaming platform. Yes, you guessed right, it’s this year’s summer smash hit ‘Piece Of Your Heart’ by the Italian production trio MEDUZA.

‘Piece Of Your Heart’ has earned over 351 million streams, and it is safe to say it has put MEDUZA on the map. Simone, Luca, and Matt all make up this up-and-coming Italian production trio that already disproved the one-hit-wonder theory with their new single ‘Self Control’ featuring Becky Hill.

We catch up with Matt from Meduza, who uncovers details about the so-far mysterious trio from Italy: “I [Matt] DJ/play our music out in clubs and at shows and am also an executive producer in the trio. Luca and Simone work hard at creating the sound of Meduza through original productions and remixes, and all three of us together create/perform live”, Matt introduces all members.

He also proceeds by explaining how the three of them got together, leaving Matt the last component of Meduza: “Simone and Luca started off by working together on some projects close to 10 years ago, and then we all met a few years later. We’ve been working on a few things together throughout the last few years, and finally, when we’re in the studio in sessions working on tracks like Piece of Your Heart, we decided to form Meduza”.

The choice of their stage name was quite easy to agree on by three people as it stands for what kind of music they want to be making. Matt elaborates: “Meduza is the dark and gritty character from Greek mythology – we thought that it fit and felt right with the style of house music we wanted to create.”

Before ‘Piece Of Your Heart,’ Meduza released a remix of Friendly Fires’ ‘Heaven Let Me In.’ “The two tracks were both created close to the same time. Due to release dates, the remix came out first. When the remix came out, we were all very excited to see the positive reactions,” Matt shares.

Although the release of the ‘Heaven Let Me In’ remix was successful, no one anticipated the feedback they were about to receive for ‘Piece Of Your Heart.’ The song came out and took the world by storm. And yet again, we had to familiarise ourselves with another production sensation that will now join the battle for the number one spot of house music charts.

This summer, Meduza definitely did secure one of the top house music chart spots with ‘Piece Of Your Heart,’ a song ‘about giving/showing a piece of your heart/love unconditionally.’ Matt talks about their genius collaboration with GoodBoys and how the phrase “what sorry, just quickly, what if it’s…” really became a part of the track:

“We were in London in the studio, and we were working with the Goodboys, messing around with some different ideas. Josh was in the writing room while we were in the studio across, and Josh spoke through the talk box to relay an idea. He said, “what sorry, just quickly, what if it’s…” and the mic had been left on, so it recorded the whole thing. The vocal ended up working perfectly with the music we had created and boom… Piece of Your Heart was born,” he shares.

Following the positive response to ‘Piece Of Your Heart,’ the world awaited the next step Meduza would take. For all first releases that make it to the top of the charts, the next one is the deal of make it or break it. Meduza made sure to prove everyone wrong.

They did it. Meduza’s new single ‘Self Control’ featuring Becky Hill is an outstanding come back after their summer banger. Matt talks about how the record came about: “We have always been a fan of Becky’s writing/vocal skills, so we got in a session with her and the Goodboys in London at the start of 2019. We wanted to keep the same mood and same signature of Meduza style for the follow-up, with a step more with something little bit more radio-friendly but in a house way, trying not to end in a classic pop dance track”, with details of the music video still kept a secret.

Since last summer, Meduza had the opportunity to travel the world and witness how people react to their music in real life. When getting to experience different places, you wonder which one actually made an impact. Matt replies straight away: “Manchester Warehouse Project without any doubts is my fav show until now. The underground atmosphere was incredible, and people reacted to every track in a positive way. We traveled together into one hour and a half journey into the house music and the melodies. I can compare that moment like writing a story for an author”.

Matt says Meduza is always working on new music and touring, but he hints at a new remix coming before the end of the year, so look out for that one.