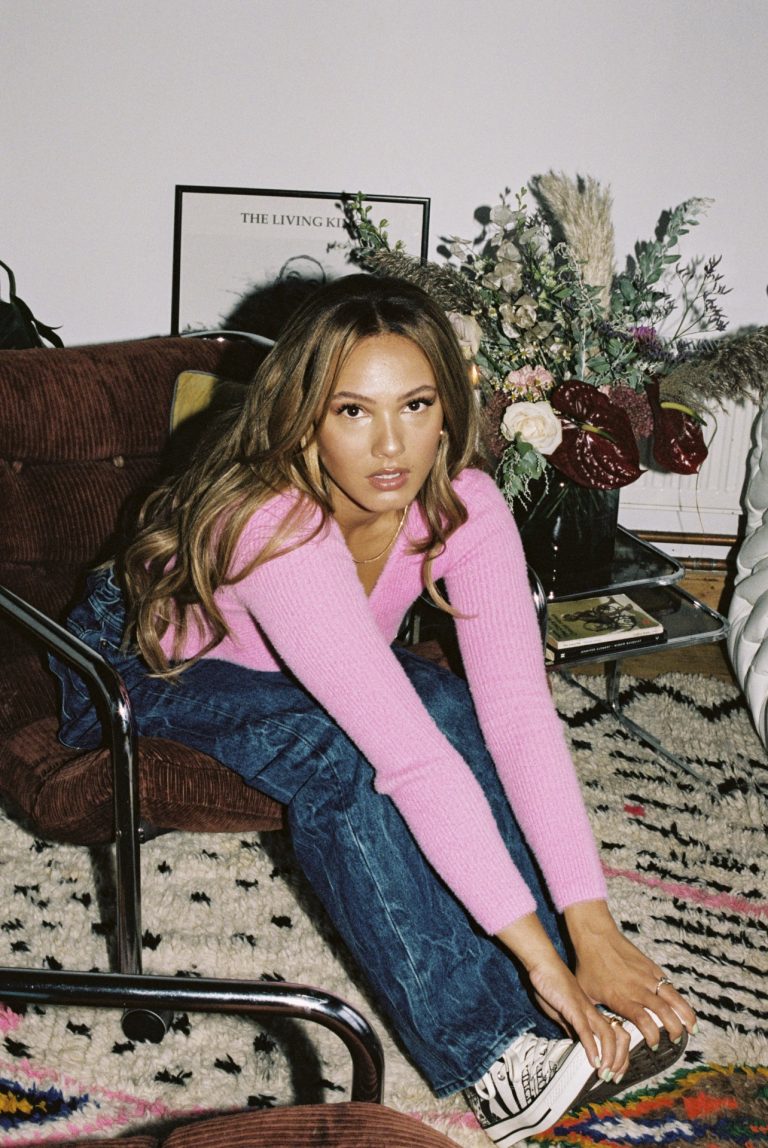 “Keep kicking the door down, be a rebel,” a rising British artist Lauren Faith sends a message to all aspiring female producers. In celebration of her new project, ‘No Path To Follow,’ Faith reflects on her growth as a songwriter and producer.

Born into a musical family, Lauren Faith grew up listening to her mother’s vinyl collection of 70’s funk, neo-soul, and Go-Go. After a year at a performing arts sixth form college, Faith left to pursue music properly. Her mom bought her a laptop to support her daughter’s dreams, and Faith fell into the deep end of Garage Band.

It wasn’t until 2017 that Lauren Faith felt encouraged to produce music herself in a male-dominated industry, with tracks like ‘Feels’ that is 100% written, produced, and performed by her. She’s also worked alongside the Haitian-Canadian producer KAYTRANADA on his ‘99.9%’ album.

During our chat, Faith also spoke on her collaboration with p-rallel on ‘Blue Denim Jeans,’ expressing different emotions on her record ‘No Path To Follow,’ such as having a crush on someone on ‘Falls Right Down.’

What have you been up to in the past couple of weeks, anything out of the ordinary?

I’ve just been working on my new music and been producing some really cool artists.

Do you remember the moment when you knew ‘this is it’, ‘this is what I want to do for the rest of my life’?

Yeah it was when I first started playing piano & guitar when I was five, That’s when I knew. My dad does music and my mum has the most insane record collection. I’ve always been around music.

How did you learn to produce music? Did you feel encouraged to do it yourself as not many females are producers?

When I was 16, I went to a performing arts sixth form college and I did the subject Music tech. This was the first time I started working with music software. I learnt the basics on pro tools but then left the college after a year to pursue music properly. I’m lucky to have a supportive mum as she bought me my first laptop and I used Garage Band to put down my composition ideas & songs.  I then made the move over to Logic Pro and continued to do the same for years. However it wasn’t until 2017 where I took production seriously (and where my production actually started to sound good). I invested in plugins and watched more youtube tutorials and really deconstructed some of my favourite records. I felt encouraged in 2017 to produce, but never before then as it felt that production was a sacred place where only men could hold the space to be the producers.Thankfully I no longer feel that way.

What would you advise to other females wanting to make it in the music industry?

Don’t get too caught up in the emotional side of being an artist. Make good music and the rest will come.Production can be lonely but worth it if it’s your passion. So, dream big, keep kicking that door down. Be a rebel!!!!

What inspires your songwriting?

How would you compare your EP ‘Cosmic’ with your upcoming project ‘No Path To Follow’?

I’ve evolved as an artist and as a producer, my influences and inspirations have grown and changed. So the two EP’s are different. Cosmic was a showcase of my jazz side, No Path To Follow showcases the growth in my skill as a producer and also my ambitions as an Artist.  No Path To Follow is more song focused.

How did you link up with KAYTRANADA for ‘Just A Little’? How was it working with him?

Kay is one of a kind, I’ve worked with him since 2015. I did some work on his 99.9% album and after that we’ve continued to collaborate over the years.

How did the collaboration with p-rallel on ‘Blue Denim Jeans’ come about?

Our managers linked us up and we got in the studio and made a few records!

What does the song mean to you both?

For me the song is about my struggle with depression especially as it was heightened at the time when we were in our first or second lockdown I believe? Gio ( P-rallel) Captured this emotion perfectly with his production. I Love Gio, He’s great!

What inspired you to write ‘Hold You Close’?

A sunny day combined with a long car journey and just feeling that way towards the person I love.

How about ‘Falls Right Down’?

I wanted to make a song that captures that feeling you get when you have a crush on someone. Kinda like when we were all once at school and you were experiencing that exciting feeling for the first time.It’s cheeky, It’s shy, It’s clumsy, It’s just fun. I loved making it.

How would you describe your new project ‘No Path To Follow’?  What do you want people to take away from it?

It’s fun, Classy, Quirky and Unique.It steps into a more alternative pop/indie direction which I’m really excited for everyone to hear!! There’s a song for everyone on this project; it highlights different emotions and moods.

In the middle of making the next project. Very exciting!