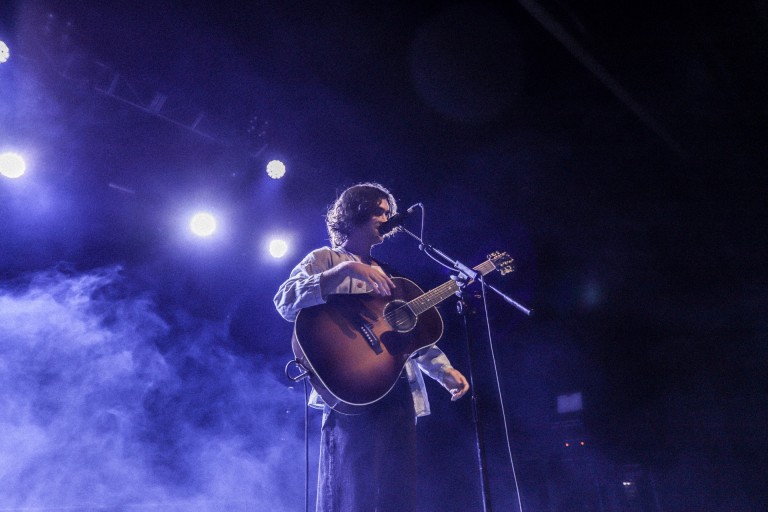 On The Road With Alexander 23

As he is jetting back home to Chicago for his Lollapalooza performance, GRAMMY®-nominated singer, songwriter, producer, and multi-instrumentalist Alexander 23 hangs out with Noctis for a brief in-between show catch-up.

With his talents amassed into his debut album ‘Aftershock’ and busy touring schedule supporting the legend John Mayer on rescheduled US dates for the superstar’s Sob Rock Tour 2022 and Tate McRae across the UK and Ireland, Alexander has been in full swing.

While on the road, London’s nonstop chaotic energy made Alexander feel at home, then he decided he wanted to write his second album in the UK’s capital. The unpredictability of the city’s intentions for one’s destiny seems like a perfect songwriting canvas for a star of Alexander’s scale.

With ‘Aftershock’ out, for everyone to make it their own, Alexander hopes for the audience to make their interpretations as he’s worked through his emotions in the vulnerable lyricism on tracks like ‘The Hardest Part,’ ‘Fall 2017 (What If?)’ and ‘Somebody’s Nobody.’

Read more for a more in-depth scoop of Alexander 23’s whereabouts and his debut record ‘Aftershock,’ eligible for one of this year’s best pop albums.

How was it touring with John Mayer?  Could you also elaborate on the role John Mayer played in your life?

Touring with John was a million dreams coming true simultaneously. John has been such a guiding light in my journey to find myself as an artist.

How was it to share the stage with him?

In some ways it felt like an out of body experience and in others it was just like jamming with another friend who loves music.

When did you discover your passion for music?

I was about 9 years old when I started playing guitar and knew I needed to do that for the rest of my life.

Do you remember when you started writing songs and what they were about?

I wrote my first song in middle school to try to win back an ex girlfriend which I guess was pretty prescient.

Is there a reason behind the number 23 in your stage name?

I was born on the 23rd and was 23 when I started making my own music.

You co-produced Olivia Rodrigo’s ‘good 4 u,’ could you share more about this experience?

Olivia is a once in a generation artist. Dan Nigro is the best producer in the world. So it was an amazing experience to learn and work alongside them.

What inspired you to write ‘IDK You Yet’?

I wrote this song at the start of quarantine in 2020. That period of my life reminded me of an earlier time when everything was going wrong for me.

What is the backstory of ‘The Hardest Part’?

As i’ve gotten older I’ve unfortunately had to experience more and more loss. This song was me working through my emotions in response to the loss of a friend. It was not a fun song to write.

What is ‘Crash’ about?

Crash is really a realization that you can miss the person you were with but not who you became together. That was really a lightbulb moment for me.

How did you learn to be so vulnerable in your songwriting?

I actually think it comes from somewhere selfish. I write songs purely for me and to deal with my own emotions. Once I release them, then they are for the audience but I don’t write them with the audience in mind at all.

What was important for you to touch upon on your debut album?

I wanted to make sure that it was a true album and not just a collection of songs. I think there’s a huge difference and I’m proud of where it ended up.

What does the album represent to you personally?

They say you spend your whole life writing your debut album and I think that’s really true for me. This is all of me in an album.

What are you manifesting next for yourself and your career?

I want to play in the celebrity NBA all star game.