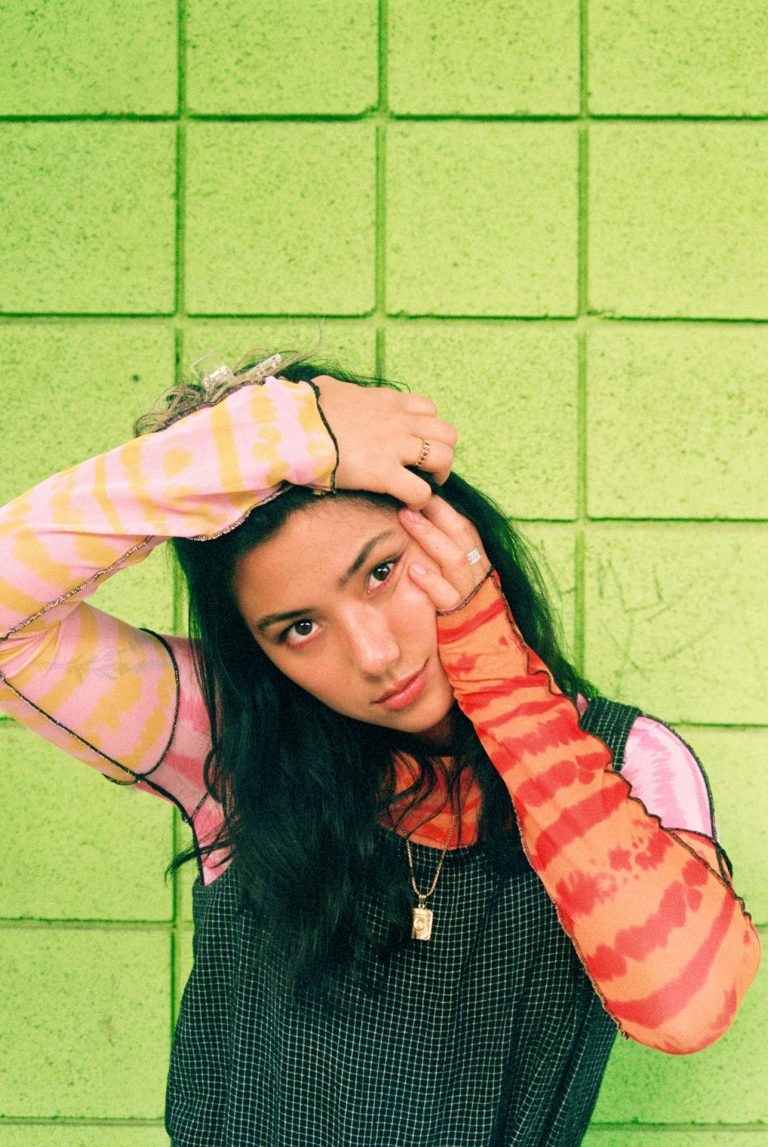 One To Watch: spill tab

The appeal of the French-Korean-American artist spill tab lies in her effortless bedroom pop lyricism both in English and French and unique aura that invites you to her world made up of cowboy acts of revenge accompanied by experimental sounds anxiety-spattered themes. The latest release, titled ‘Indecisive,’ featuring Tommy Genesis, follows spill tab on her quest through her restless mind, “my mind is all mixed up, my mind is melting off.”

Admitting she would be a shit doctor, having musical parents, spill tab knew she would end up in the music industry at one point or another. Before committing to her singing career, she’s had an A&R internship and sold merch for the one and only Gus Dapperton.

After posting an original song on her Instagram, David Marinelli, spill tab’s long-time collaborator, left a comment that turned into a beautiful symbiosis that resulted in tracks like ‘Indecisive’ or ‘PISTOLWHIP’ that set spill tab as an artist to watch. This portrayal of a made-up movie is about “getting cheated on and playing out your revenge plot but in cowboy style” and is a classified mosh pit starter.

‘Indecisive’ is the newest teaser of spill tab’s forthcoming project coming this Autumn that she described as “insane, but also soft, but also sick, and also mesmerizing.” Besides the new EP, spill tab will join her good friends, Gus Dapperton and JAWNY, on tour through North America. She also announced her first headline show of the year at London’s Courtyard on September 15th.

What are you up to these days?

Having musical parents, have you ever thought about doing something else, or were you always into music, wanting to continue you in their footsteps?

It was always going to be music or the music industry in general, I would make a shit doctor tbh.

Would you say having an Algerian father and a South Korean mother exposed you to more culture, more musical influences?

Yes absolutely, there were at least three languages being spoken in the house when growing up, and moving around a lot opened my eyes to different perspectives and cultural norms.

Have you always lived half English, half French life?

Yes, you could say I am a brie cheese burger.

What is the meaning behind your moniker?

When do you usually come up with the best lyrics that you then put down in your Notes app?

When i’m not thinking too hard.

All types of ways, I get bored easily so it’s important to me to always be trying something different.

You’re based in Los Angeles, but you went to New York University, how would you compare living in LA to New York?

What could you tell us about your time at A&R internships? What did you learn?

That there is an endless amount of music in the world, and that I really want to be a part of creating something exciting and new and interesting.

Was it the song that you posted on Instagram that started it all for you?

A little snippet of an original tune that I recorded in my room. My collaborator David saw it and commented on it, and that’s how we started working together.

How did you come up with the song title ‘PISTOLWHIP’, what is it supposed to portray?

It’s a little movie I made in my head about getting cheated on and playing out your revenge plot but in cowboy style.

What is the story behind ‘Anybody Else’?

What can you tell us about ‘Indecisive’ feat Tommy Genesis?
It’s bangerama, it’s rippin’ but also sensitive and I want it to be the soundtrack of a racecar movie

How did Tommy Genesis get involved on the track?
I think we just sent it off to her team, and she really fucked with the track and I really fuck with her and her music so it was a beautiful, heavenly match.

Who do you work with on your cover art?

My best friend of all time Jade Sadler.

You’re headed out on a North American tour with Gus Dapperton, this time not as his merch manager, but as his tour support! How does that feel?

It’s a crazy full circle moment, it’s so special to be able to do this for the first time with a bunch of friends as well, like that whole camp of people is beyond amazing and I can’t wait for the fall!

What can you tell us about your upcoming project?