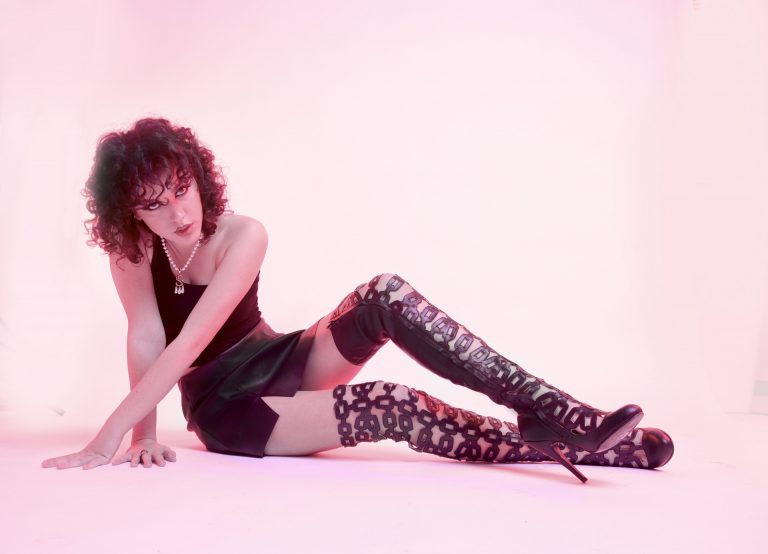 Ramona Blue is Curious, Determined, and Here to Stay

Ramona Blue can do it all, just watch her. After starting out in punk band GLOSSII, Ramona decided to spread her wings and kick start a solo career, bringing with her an empowered sense of self and commanding stage presence. Now, Ramona shows just what her versatile talent is capable of, making the switch from punk to pop with solo debut track ‘Curious‘. Written about suspicions of an unfaithful partner, ‘Curious’ combines infectious pop vocals, sprinkled with elements of trap, giving it a raw depth. The resulting production is an impressive debut that explores relatable vulnerable moments, all the while giving strength and reclaiming power.

As part of the LGBTQ+ community, Ramona, like many of us, recognises a distinct lack of representation for Lesbian artists in pop music. Despite there being a talented variety of LGBTQ+ musicians, rarely do we see those artists rise to chart topping success of their counterparts. Inspired by the likes of Hayley Kiyoko and girl in red, Ramona has high hopes of reaching mainstream success, and ‘Curious’ is an admirable start.

We speak to Ramona about the transition from punk to pop music, what the industry is missing, and the vibrant new visuals for ‘Curious’, premiering today.

Hi Ramona, thanks for speaking with us – how has the past year been for you? What has it been like as an independent emerging artist trying to create throughout the pandemic?

Thanks for having me! Wow, the past year has been interesting… I started writing my own material when we first went into lockdown which was really intense because I couldn’t go anywhere but, the outcome was so rewarding! ‘Curious’ was actually the first song I wrote for my solo career! It can be really tough and you go through dry patches as an artist because you’re hardly experiencing the world and being stuck inside your house can really dry up your creativity. I mean, the times when I feel the most creative is when I’m out and about and busy and I get these sudden bursts of creativity especially when I’m on the train.

So you’re no stranger to performing, having previously fronted a punk band which gained attention from BBC Introducing. What made you decide to continue on as a solo artist?

I think it was mainly just a growth thing. I just grew to want different things and grew out of old patterns and knew that a solo career and being able to express myself 100% authentically was something I really wanted.

Would you say it’s been difficult to transition from punk to pop music? Or do you feel it’s been quite natural?

Honestly, I listen to EVERYTHING so musically, range has always been something I’m good at but I would say I struggled with figuring out how to transition from the image of being a young angry teen to a matured version of that but the writing process really helped me figure out how to do that.

Representation is so important within music as it’s definitely an industry that has made many people feel ‘othered’. As a member of the LGBTQ+ community, what issues do you want to address with your music?

Being a Lesbian pop singer seems almost unheard of because apart from Hayley Kiyoko, we have no mainstream representation. There are quite a few up and coming, bigger indie pop singers but no Ariana Grande level singers and I think it’s a huge issue that the industry isn’t addressing. Are they scared to have a woman in the mainstream who is selling to other women rather than men? I don’t know but I want to be that change. I think women loving women are SO damn powerful and I think people are scared of that power.

What other indie artists do you feel are making waves within the LGBTQ+ community?

I mean the fact that ‘do you listen to girl in red?’ Is the new way of asking is someone is a lesbian means that she’s obviously doing something right! There’s so many but one of my favourites is this really crazy punk band called GRLwood, they’re fucking nuts. I love what Rebecca Black is doing, especially her song ‘Girlfriend’.

Can you tell us about your influences and inspirations, inside and outside of music?

Literally any female artist who has something to say whether it be about sex, love, money or haters, I want to hear it all. I’d say 90% of the music I listen to is written by women. I guess it’s because I can relate but also because I get so inspired by how different they all are. Lana Del Rey’s lyrics raised me, Christina Aguilera’s power taught me how to sing, Lady Gaga’s image made me want to stand out, Wolf Alice taught me how to write incredible melodies and recently, Rico Nasty taught me girls can be angry and it’s not ugly. Outside of music, my girlfriend Rose (from ‘Valeras’) and my mum always keep me inspired and keep me growing and push me to push myself. I am so grateful to have them.

I wrote it at the beginning of the pandemic because I was listening to a lot of Rihanna at the time and got obsessed with her use of trap beats on the Anti album. I listened to her old hits and I realised that they’re so simply structured and written but so well thought out to be catchy with raw lyrics that are blunt and obvious and that is exactly what I tried to do with curious!

Was the track inspired by true events in your personal life?

Yes it was! Music is a form of therapy in a lot of ways and whatever comes out naturally is what was meant to be written.

The music video to ‘Curious’ is premiering today! Tell us about the visuals, what was the idea? Were you very involved in the aesthetic vision?

I worked with Kasia to create something that was very looks based. We wanted to go for something like a space inspired editorial shoot with lots of different looks and colours. I always want to be completely involved in the vision because, after all, it’s my brand but Kasia was incredible and whipped up everything so fast. It’s like she read my mind and knew exactly what I wanted.

When can we expect your debut EP? Or is it too soon to ask!

I’m planning on releasing three more singles this year so that’s a lot to look forward to!