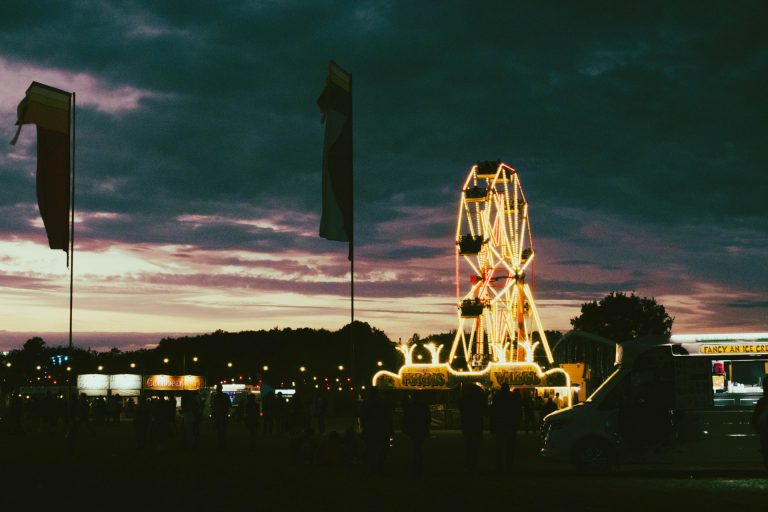 Strawberries & Creem is a relatively new festival, having only begun in 2014 as a weekly club night set up by a group of students who saw a lack of the kind of music they enjoyed in the Cambridge club scene, which ended up becoming so popular that in under a year they expanded to hosting a garden party with 800 people, a handmade banner and their first ever headliners Shy fx, David Rodigan and Jus Now, developing into a full blown festival, expanding to a capacity of 8,500 just by 2017. And now in 2021, they’re hosting their first two day event. One of the most inclusive and fastest growing festivals, S&C proudly feature over 50% female acts and offer an incredibly diverse line up while maintaining a friendly and united feeling spread across the three main stages: S&C Main stage, Studio S&C, and Renegade Roulade. S&C became the first pilot event to sign the Safe Spaces Now pledge, in which they endeavour to ‘improve safety for women, girls and marginalised genders in music, at festivals and events’. Strawberries & Creem is set to only get bigger and better as the years go on, their mantra ‘celebrate heritage, champion future’, echoing throughout the entire festival.

With headliners Koffee and Burna Boy playing Saturday alongside other artists such as Wilkinson, Cardinal Sound and Honey Dijon, the atmosphere was heavy with excitement and anticipation when we arrived on Sunday, with an enjoyable buzz created in the wake of the previous night’s acts.

Girls in colourful printed sheer co ords and sparkly tops with glitter on their cheeks and boys in baggy jeans and sunglasses scattered about the festival started gravitating towards the Girls can’t DJ x Clarks Originals Carnival Float in the ebbing and flowing mid-afternoon sunlight. With several DJs switching out keeping the vibes lively and fresh, performers such as Izzy Bossy, Taylah Elaine, EZE and more created the perfect blend of relaxed and upbeat rhythms to reflect the ambiance of a true carnival on a hazy afternoon. Ten foot tall performers swayed through the crowd on stilts in multi coloured costumes, masks emblazoned with diamonds glimmering in the light and fan like fabric wings fluttered behind them in the breeze. Notting Hill Carnival takeover thrived, both through the crowds and on the main stage in the cheerful and bright atmosphere, the Caribbean influences shining through the performances. Featuring steel drums and an array of beautiful smiling dancers glowing in bright costumes of turquoise jewel encrusted bikinis or orange and yellow feathered two pieces on stage set a united feeling of hopefulness for returning to a more normal carnival season next year.

The studio S&C stage showcased its own personality through parades of silver streamers and clusters of shimmering disco balls framing the entrance. Once under the canopy, festival goers found themselves in a sheltered, almost cave like stage area filled with people rhythmically bopping to the likes of Moxie, Eliza Rose, Jasper James, and Gabrielle Kwarteng alongside various support acts. The crowd ebbed and flowed throughout the day but regardless of time there was a constant crowd moving to the medley of garage, grime, house, dance, and electronic beats. Behind the scenes, Nando’s spiced up the backstage area, quickly becoming the hottest hang out of choice. Artists were fuelling up before their sets and other spicy talent were feasting on PERi-PERi well into the night.

Brothers from New Zealand, Chaos in the CBD are an electronic duo merging house and techno with an essence of jazz. Growing up around jazz music and indie bands in their adolescent years, they went on to discover electronic music and then to produce and DJ together. The sounds of their famous track ‘Midnight in Peckham’ united the crowd together matching their energy on stage. Despite not having much ground to move on, their chilled out and friendly vibes on stage reflected positively on the crowd, encouraging everyone to let loose and have a good time. Chaos in the CBD hyped up Mall Grab’s entrance at the end of their set and the energetic and friendly change over between the two acts set the atmosphere for Mall Grab to end the night on a high. Mall Grab has quickly become the poster boy of constant interchanging lo-fi house and techno, having influence all over the world for his recognisable sets. He explores the roots of house and techno alongside efforts of his hometowns music history whilst still keeping sounds minimal and mysterious. Moving his base to London, he channels his experiences of the city into his tracks such as ‘Liverpool Street in the rain’. The futuristic sounds resemble the ever-changing elements of London and atmospheric properties that make it such an inspiring place. As the pace of this specific track quickens, you can really engage with the title here. His stage presence kept the crowd in good spirits and carried the night through.

Renegade Roulade was set underneath a classic big top which emulated a real sense of iconic festival vibes, it felt a little separate from the rest of the festival but was none the less packed with people and buzzing at all times. Hybrid Minds, Dimension on Kanine were among those performing on Sunday and the glimpse I caught of Kanine’s set above the outstretched raised hands and heads of the energetically bobbing crowd featured colourful nostalgic swirling disco style lights swirling in a complimentary way to the drum & bass.

On the other side of the festival while early evening set in, in a blissful coincidence a deep rich hued rainbow fell from the darkening clouds behind the Strawberries & Creem main stage as the sun set, throwing the last long strands of orange light through the spokes of the Ferris wheel. A buzzing crowd gathered in anticipation of Little Simz as the sky quickly faded to an evening shade of blackish purple and a line of bright spotlights flashed on to receive an electric collective shout from the excitable crowd. 5 backing musicians entered the stage, perfectly spaced on a platform with their instruments and appeared stoic and column like before Little Simz burst out on stage in front of them with as much impact as a bolt of lightning. Three songs in, the rapper launches into one of her most popular tracks Venom, to a riled up scream of delight from the crowd. Venom, which has almost 60,000,000 listens on Spotify, is a fast paced, impactful, and raw song exploring struggles with mental health: ‘if you ever heard what I heard in my mind, never try, you would cry, that’s a lie, you would die’. The energy Little Simz poured into the performance echoed from a place of both resilience and pain, creating this anthem for fans who have struggled in their mental health and relate to these feelings of despair, yet there’s an air of power and fight that bites back at it. The stage presence Little Simz brings to her performances is unmatched by anything I’ve seen recently, carrying the crowd on a wave of pure emotion and intensity throughout the set.

Bugzy Malone followed on from Little Simz on the Main stage, bringing his iconic accented vocals with strength and authority. The lights flickered between saturated tones to set the mood for each track while the Grime MC stomped and bouncing across the stage with confidence, swaying to the beat while soaking up the energy being given by the crowd. Giggs was the final act and closed the main stage on Sunday with his deep and grounding voice sounding out across the festival, a pure kind of emotion swept across the crowd as he fell silent for certain lines of some of his best known tracks, such as ‘Daily Duppy’ or ‘Lock Doh’ and the voices of the crowd could be heard shouting it out to him, united as one voice.

We can’t wait for the return of Strawberries & Creem festival in 2022 – see you there! www.strawberriesandcreem.com