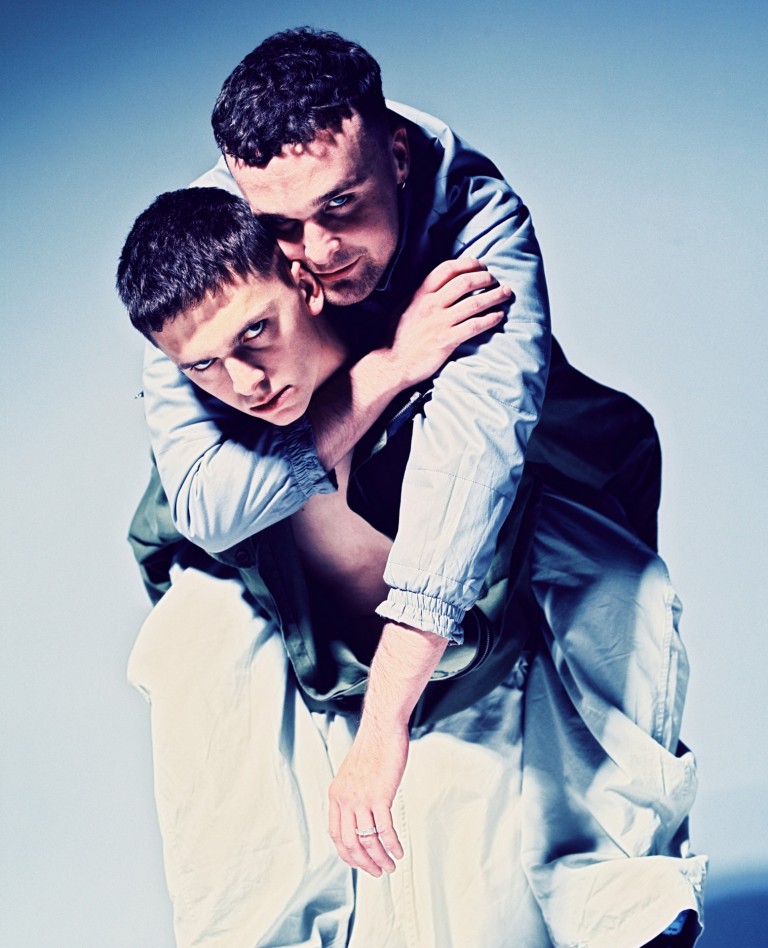 Ride Against The System With Sad Night Dynamite

In the era of autotune and oversaturated influx of new music, the UK breakout band Sad Night Dynamite sticks to its own and narrates the dark and twisted reality of everyday life.

Childhood friends Archie and Josh from Sad Night Dynamite elevate their talents with a growing shock value wanting people to be left wondering and disturbed. With their substantial moral of staying away from normal society and rejecting an ordinary routine, Sad Night Dynamite’s music creates a blend with elements of a dystopian world with escapism.

Ahead of their debut performance at Reading & Leeds this weekend, Sad Night Dynamite unhusk the basis of their sound, creative processes, and plans with an upcoming London show at Electric Brixton on October 20th.

Where are you at the moment?

Currently in a splitter van on the way back from the USA. We played a show in Denver at a festival called Vortex. We are quite tired so apologies if any of our answers make no sense.

What does Sad Night Dynamite stand for?

I don’t even know what I stand for.

As childhood friends, when did you decide you wanted to make music together? Were you always musical together?

I don’t remember it ever being a conscious decision. I recall we wrote our first song in about 10 mins and I’m not sure we even realised we were doing it. We were more just messing around. The first song we did was actually the best we wrote for years, and it was the decision to take music seriously that was our downfall for a long time. It took us a while to realise you have to be having fun to make good music, and so keeping it relaxed and light is the way to go.

Do you remember what your first song was about?

Yes haha it was the classic take on a toxic relationship. I remember one of the lines was ‘I’m tired of coming back to your flat’, I was 16 and had never been back to anyone’s flat.

Who do you take most inspiration from?

It changes with the times, but an artist we will forever be in awe of is Kendrick Lamar. His attention to detail is v inspiring.

How do you usually go around making a song from start to finish?

There isn’t one way with us. It starts with a beat and a melody, then the rest is a random roller coaster of re writing, re-working etc. I don’t think you can get stuck into too much of a routine, otherwise the music suffers. Luckily as we are on the road all the time it’s quite hard to get boxed into a routine.

Congratulations on your new single ‘What Does That Make me’, it is out of this world catchy, how did you come up with the concept for this song, what inspired it?

Thank you. We were in a session with our friend Benji. It was our first session working with him. He played a bunch of ideas, one being the floaters sample with his pitched vocal on top. We took his idea, went away, and produced a song around it. The concept is that feeling you get when you start to question who you really are. The differences between the versions of ourselves in public and the person we are when behind closed doors.

You wrote ‘What Does It Make Me’ in lockdown, how was your experience on staying creative during lockdown?

Staying creative has never been too hard for us. Josh likes to say we’ve been in lockdown for about 6 years making music so it wasn’t anything out the norm. I genuinely think the claustrophobic Nature of the lockdown lended itself to our music. The music to me feels detached a pretty far from normal society.

How would you compare your current single with previous releases ‘Volume 1’ and ‘Volume 2’? Is there a certain progression you were looking to achieve?

What Does That Make Me? is definitely a break from the nightmare of volumes 1 and 2. It’s lighter than anything we’ve released before. We never set out to write a song like that, it’s just something that happened.

How was it supporting Glass Animals over in the US?

Supporting those guys was pretty incredible. We used that month as a sorta training camp in live performance. Screaming “titty krunk” at a theatre full of strangers and concerned parents was a lot of fun. Someone tweeted after our show ‘is this a practical joke being played on us’. I take that as a compliment.

How would you compare the UK and US audiences? Which one goes harder?

We’ve had great experiences with both. The Americans are generally a bit more wholesome. People are there to support and have a good time, which is lovely. The UK are also there to have a good time but would prefer to be hammered whilst doing it. I think the Americans can let go easier. The UK need a drink to loosen up.

When you were standing on a stage at Glastonbury, what was going through your head? How do you hype yourself up for such an iconic performance?

Honestly the main thing going through my head was don’t fuck up. We’ve tried hyping ourselves up before shows but I don’t think it helps the performance. Just taking a second on stage and grounding yourself works best for me.

Who would be your dream collaborators?

MIA would be my choice.

What are you planning for your upcoming live shows?

Just adding to it to make sure it’s progresses. The end goal is for the audience to come away from our shows thinking what the fuck have I just seen. When we get there, we’ll be happy.

Currently in the works trying to find a gimp to tie to the side of the stage. Anyone who’s interested let us know.

Could you share anything about upcoming releases? What could your fans expect?

A headline show at the end of the year is coming. Then a load of music next year. Possibly a break down along the way. Can’t wait.