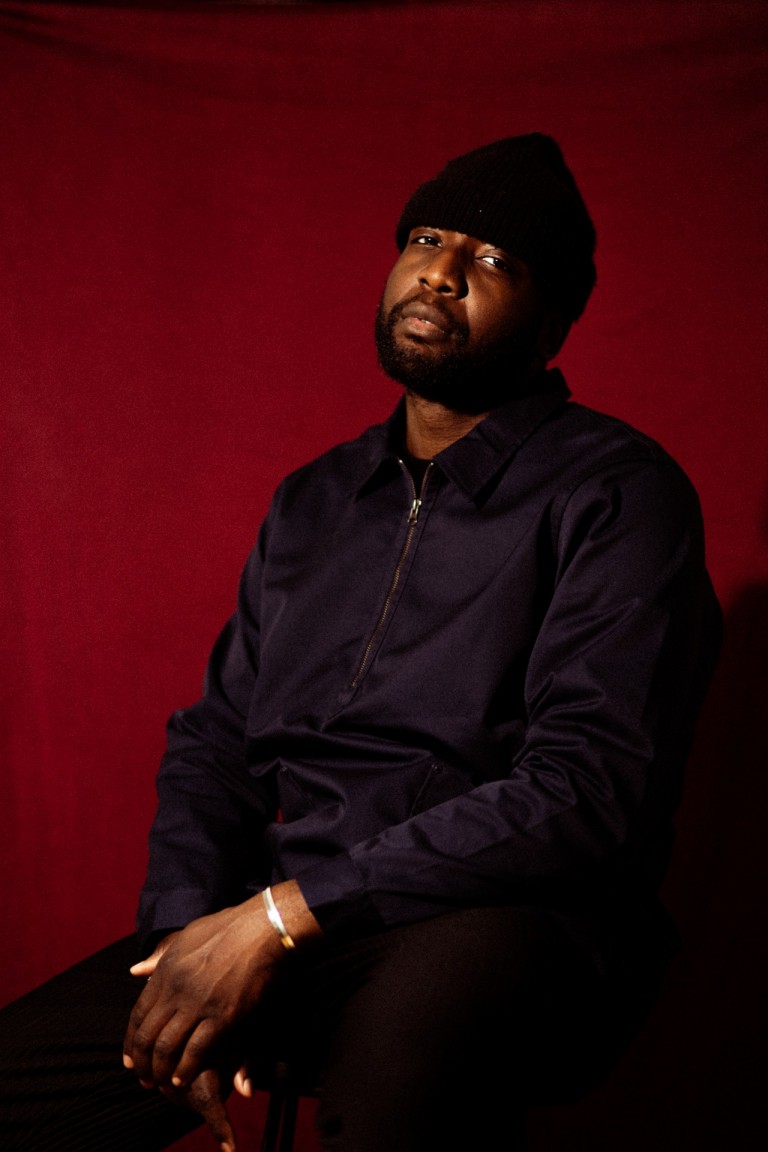 We are all a part of our environment’s cover art. Our behaviors represent our neighborhood’s evolution, scars, and preconceptions. Multi-layered artist Shadez The Misfit dedicates his newest single, ‘SOUTH-SIDE SOLACE,’ to ‘the perfect blend of chaos and peace’ that is South London.

The definition of solace is ‘comfort or consolation in a time of distress or sadness,’ meaning ‘SOUTH-SIDE SOLACE’ is instead a sonic interpretation of an unfiltered diary entry than a love letter. Tazar Tionè Sancho, aka Shadez THe Misfit, is an alternative hip-hop wordsmith who fights for hope and focuses on elevation more than anything.

Noctis premiers ‘SOUTH-SIDE SOLACE’ as it explores the key moments that have shaped the rapper’s perspective with varying tempos, paired with piercing melodies and hypnotic drums. The track reflects the mutable changes in Shadez’s mood as he dissects his truth whilst living in South London.

Currently, Shadez works on maintaining a balance of the new role of being a father with the deadlines of releases and creative pursuits. Getting back to our normal lives, after the confusing past few years, last year Shadez achieved moments such as Mercury Award nominations and being featured in Youtube Originals’ ‘Black Renaissance’ for the segment with Barack Obama.

With 2022 in full strength, Shadez focuses on “staying consistent in providing music experiences to existing and new listeners and enjoying the journey vs. the destination. I’m in good spirits and making sure the creative outputs reflect that online and offline”.

He elaborates on this year’s intentions: “My main intentions are to leave people better than they were…to create experiences, tangible experiences for people to enjoy, connect and feel a part of. I feel you don’t necessarily remember the product but instead the experience that comes with the product. Connecting to the emotions behind it and really immersing people into my world, thoughts, and feelings is one step closer to my overall goal. This year is about establishing myself through the things I personally love and continue to create, whether its music, fashion, art, or even bringing it all together through well thought out creative experiences”.

Music came to the forefront when Shadez attended a university and was inspired by the likes of MF Doom, Quasimoto, Drake, Andre 3000, Kendrick Lamar, and their musical translations of emotion. “I was personally inspired by how they were able to convey thoughts, feelings, emotions, and more through music. Music became my own canvas to express, seeing it as my diary entry, and I would enter open mic nights just to see how crowds would personally react, attending ILUVLIVE and more at the time. Me entering these competitions led me to win a huge one for Channel 4 and Fiat. Out of over 4500 entries, I won to perform on live TV alongside Fun Lovin Criminals and Plan B. it was the biggest eye-opener for me and gave me a taste of what being a musician really was. Since then, I have never looked back and am grateful to have achieved so much with even more to showcase”.

Circling back to our environment’s impact on our psyche, Shadez speaks on lacking peers of his caliber, which made him work even harder ‘to achieve the impossible,’ looking up to Pharrell, Nigo, even Willy Wonka. He explains: “It was the common thread that they all created their realities; a reality they didn’t want to escape from. Creating possibilities you never thought could be possible through products, experiences, and ultimately through the things they love, whether it be music, design, fashion, or clothing. It was a clear extension of their personalities, passions, and forms of self-expression, which made me admire them even more”.

When it comes to the sound of Shadez The Misfit, the rapper pushes the boundaries of sound and prefers not to be put into only one category: “My style of music I aim to not box it or put it into categories but it is mainly hip hop, experimental and alternative hip hop influenced by life experiences, perspectives, and truths…these things inspire me, being able to convey thoughts and feelings to say something or express emotions musically that when people hear it, they have always felt that way but didn’t know how to express it”.

The discography of Shadez The Misfit goes as far as 2016, as he mentions his 2016 project ‘Ne Plus Ultra’ to help him describe the indescribable through his introspective lyrics while “finding simplicity in the complex”: “The theme throughout my music which I’ve noticed is that its always about elevating despite whatever you face, being able to convey perseverance and moments of hope amongst the noise, chaos, and madness. My earlier stuff with the Ne Plus Ultra EP was about balance, yin and yang, dark light, and showcasing moments of elevation. Where I am now with songwriting is being able to do the unexpected with sound design to push boundaries sonically but lyrically explore themes and create moments that you have personally felt and gone through but never knew how to describe it best. Ultimately finding simplicity in the complex”.

His catalog is full of honest and self-aware interpretations of day-to-day activities written like it’s an out-of-body experience: “That feeling of understanding myself line by line like a diary extract and being honest with myself but having the music add value to what I say. It becomes a back and forth, but I look at my lyrics like a component in an orchestra; on their own, they are amazing, but when it complements the overall sound design in unison, it takes things to a whole new realm”.

The rawest version of our mental observations surfaces when you turn off the societal turmoil and let your thoughts flow in. Shadez talks about his track that encapsulates this phenomenon: “RANDOM INNER THOUGHTS” is literally what it says on the tin, embracing the thoughts that came first to mind or the inner conversations I would have with myself when no one was looking. It was a train of thought that led me down a rabbit hole but also made me question myself in the process, making me become self-aware but mainly vulnerable on how I saw things that affected me and others day to day”.

Another more recent Shadez The Misfit repertoire is the sociopolitically reflective and empowering song ‘2B3’. He talks more about the theme behind the track: “Produced by T. Hemingway and Palimath the song initially came from personal frustrations of how a person can be perceived just off their looks and branded as something they’re not, let alone the color of their skin. It was great exploring this further, and I have always wanted to create a song that gave hope and was high energy, but the topic is somewhat the opposite where I tackle key themes in the situations I know myself and others face on a day-to-day basis. It was a way to challenge the listener to see if they’re really listening, to ultimately change their perspective and give insight on how we may feel especially and ironically knowing that this also gets overlooked in real life”.

Before unveiling details about his new single ‘SOUTH-SIDE SOLACE,’ Shadez compares South London to the rest of the city: “South London is just one of a kind; it feels like home to me. The perfect blend of chaos and peace. There are spaces and places that are beyond beautiful and make you forget you’reyou’re even in London altogether. When comparing it to other parts of London, it just has its own pace to life, with it being a lot more fast-paced, I would say. It reminds e of waves crashing on a beach. You would get the occasional huge wave, but it just flows. From the culture to the nightlife to the people, it really is a place of its own”.

He continues: “Living in South London pretty much molded me into who I am today, from the lifestyle I was exposed to, to the slang, to be able to experience all levels of life, good or bad. It strengthened me from experiencing things at a young age and understanding myself but even more how your actions and the actions of others affect perspectives, lives, and even the path you choose later in life. It’sIt’s easy to get lost in the abyss and darkness especially in South London, but it’s also a beautiful place to create the greatest moments. Flowers grow in the concrete here; the most amazing pieces of art are created by people of south London. There’s so much hope, love, and even better potential and I think that part of living here has impacted me the most. I’ve seen nothing become something, and South London embodies that daily”.

Getting to the man of the hour, ‘SOUTH-SIDE SOLACE,’ SHadez talks about what he wants it to represent: “This track is a small reminder of how far I’ve come despite the odds faced, a moment with my younger self to keep going. It reminds me daily that all those moments we face, the ups and downs we experience, and the memories past and present never go in vain”.

He also speaks on the initial spark that led to the conception of this monumental track: “It was a beautiful moment. I was in the studio with my good friends TsarJoe and FantasyFile, who I consider brothers. They were locked in working on the music deep in tunnel vision, and during them creating it I got lost in a trance as I got taken back to those moments growing up in South London at 16. Another rabbit hole moment and the irony I say “watch them dig a hole…who framed roger rabbit” just to showcase that right at the beginning. I’m a very visual person and to be able to see things through music helped me to create and write from a visual space. I wanted people to see what I saw then and take them to where I am now on a journey of how Southside changed me”.

‘SOUTH-SIDE SOLACE’ comes ahead of the rapper’s forthcoming project ‘South Side Raised Me Father God Changed Me,’ an audio-visual project that chronicles Shadez’s defining moments and subsequent growth both as an artist and a man. He shares the conceptual inspiration behind the upcoming record:”  ‘Southside Raised Me, Father God Changed Me’ tackles themes of hyper-masculinity, confinement, anger, pain, love, expectations and how all these, including the reputation of an individual, environment/area shape the growth of an individual. Understanding these contributing factors further but also acknowledging the defining moments and chapters that continue where Shadez has left off musically. It musically represents you every day having to look yourself in the mirror and love every part of you, even the broken/flawed parts we try to hide. It’s accepting oneself and being content with not seeking perfection but bettering yourself through the process. Despite the things you face …the environment you are exposed to, and the ideologies you are accustomed to… somewhat learning new skills and habits that add value and unlearning old, dated habits that don’t. It’s for me an exploration of a young, hardened gang affiliated version of me who was and is still filled with hope in conversation with the person he is now”.