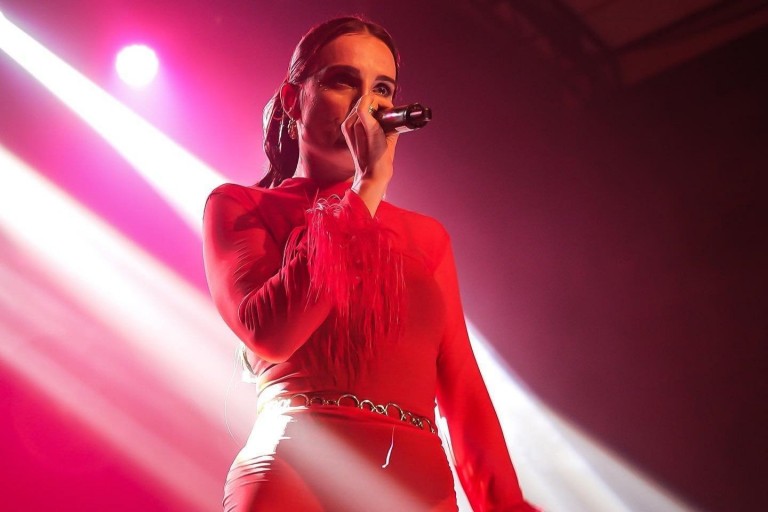 There is nothing better than a live show especially when it is in a location as intimate as Village Underground. Filled with excited fans and music taste makers, singer-songwriter Sophie Faith definitely put on a show to remember with support from a variety of talent that she handpicked for the night including Nectar Woode, Humble the Great and Baely who set the tone for the soulful evening.

First up to grace the stage was singer songwriter Nectar Woode, who instantly impressed the crowd with her unique voice and skilled guitar playing, as she performed some unreleased music for the crowd. Next up was musician and producer Humble the Great who blew me away with his deeply melodic voice, performing a variety of heartfelt tracks. R&B songwriter Baely was the last of the opening acts to claim the stage. Giving nothing but neo soul vibes during his performance, Baely showcased his vibrant range as he sung his latest single “Teleport” along with with a few more of his smooth tracks.

Dressed in a bright red outfit and instantly making her presence known Sophie Faith was so vibrant and energetic the moment she graced the stage. Her performance began with the tracks that truly put her on the map, “Bad Blood” and then an up-tempo version of her infamous debut single “Say So” and the melodic single “Cross My Mind”

In between tracks Sophie shared anecdotes of her personal life and shared her song writing process, “I wrote all these songs in lockdown and now I’m performing them, it’s crazy”, flipping through time Sophie shared some exclusive music as well as a few favourites.

As Sophie continued to speak on the inspiration behind her tracks, covering topics like heartbreak, love and loss, the songstress went onto perform “Late Nights” and the highly relatable single “Something I Said”, where she brought out her best friend to duet the expressive single. With co-signs from the nation’s favourite rapper, it was only right Sophie Faith performed crowd pleasing single “Heart On My Sleeve”, which was additionally co – written by the Brit Award Winner Stormzy.

Sophie’s vocals filled the room with joy along with her live band and blissful backing singers, among some of Sophie Faith’s most beloved tracks, the songstress also blessed fans with exclusive tracks from her upcoming projects, a cherished night for the singer songwriter, it’ll be interesting to see what stages she graces in 2023.