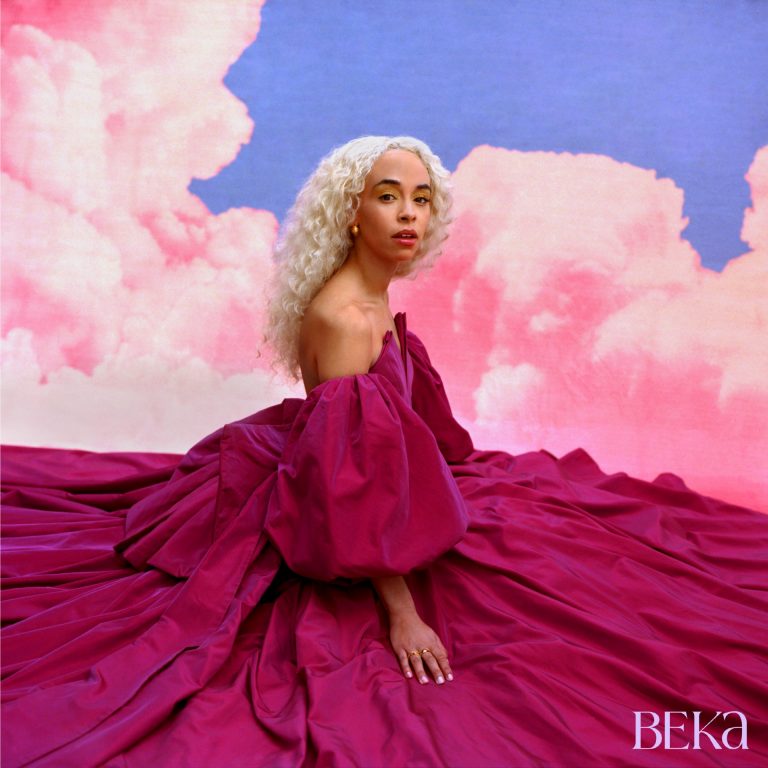 Stepping Out Of The Darkness With BEKA

The rising pop star BEKA is no stranger to our Noctis family. Ever since her compassionate debut ‘I’ll Be There’, BEKA offers a balanced dose of uplifting tunes as well as vulnerable performances. As an artist, she is just getting comfortable around the talent her body inhabits. With BEKA’s bold style, she is down to stand out, and Noctis is here for it.

Today, BEKA drops her highly anticipated debut EP ‘I’ll Be There’ featuring a new single, ‘Green Lights,’ and hits like ‘More Than Friends’ and ‘My One.’ Like any other interviewer would appreciate, vulnerability is the key to understanding what is behind the artist’s curtains made up of beautiful metaphorical lyrics and BEKA delivered.

During our interview with the gorgeous BEKA, she speaks on her fascination with art and later career commitment to music and songwriting, her friendship with HONNE, and the inspirations behind her music.

How has your day been so far?

So far I’m having a pretty 8/10 day, I had a great chat with my bestie who gave me intense ‘you’ve got this, you’re a queen’ energy haha aka what best friends are for.

How are you feeling about the release of your debut EP ‘I’ll Be There’?

I feel like it’s been such a build up to this point where I’ve been so focused on pulling all the different attributes of the art and music together and hoping that the body of work will be understood and then more-so that people can have a moment with the songs. To actually have this project out, that represents so much of me and is an amalgamation of a personal journey that the songs represent…is crazy exciting and pretty wild to be honest. (Aka I am very over excited.)

Could we trace back to when you knew you wanted to be a singer/songwriter?

I’ve always been fascinated by the arts and how it seemed to make people feel seen and understood or speak into topics we just don’t usually find comfortable to engage with. I knew I wanted to be someone who made different forms of art and then was hugely moved by music and the power of how it could bring me tears that I couldn’t quite explain! As a teen I wrote poetry and sang a bit and ended up getting the opportunity to learn about songwriting and production in a local group and so I think seeing how doable it was and how cathartic and energising performing was, gave me this music bug but expressed itself in different forms as I became an adult and only settled when I eventually stopped worrying about whether my songs were ‘any good’.

I wanted to dance and choreograph (which is what happens when you grow up on Spice Girls and Quincy Jones I reckon) and then after having different performance opportunities growing up I then went to Uni and studied Vocals and The Music Industry side. I think there was this subconscious ideation of wanting to write about what I was feeling and thinking about how I’d want to direct that and what kind of a band I’d want, but I feel like it wasn’t until I started doing BV’s with HONNE that I really let a lot of that subconscious dreaming go from ideas I was a bit scared of, to something I let myself want. We ended up having a few songs together and I think doing live shows where there were these moments with these phenomenal crowds where I felt like I escaped life for a little bit was so precious.

How did you and HONNE meet and become such close friends?

We met at University through a lovely friend of ours called Pete and I used to just find them hilarious, lovely, quirky guys. We became lovely friends and then they got back in touch a few years later when they asked if I’d be up for doing BV’s for them, to which I said hellz yeah. Touring the world with a group of lovely human beings when the tour culture is great, is unlike anything; you become a family as you’re sharing the buzz of shows and new countries but also, I guess, the vulnerability of your own real life that’s going on, so it had this beautiful concoction of creating a special bond.

What would you say is special about your guys’ collaborative relationship?

I think maybe trust. I think we have a real desire to find something that feels free and exciting without the usual ‘am I good enough… will they like this… how do I suggest my ideas’ ‘worries’ and competition that can be in a creative environment sometimes. The more comfortable and open and connected I can be with someone the easier I find it to collaborate and for me, my favourite songs are often when I can feel a bit of the humanity in the writer and I’ve found that honesty is so much easier for us because we’re safe with each other.

What is the song ‘I’ll Be There’ inspired by?

The song began one morning after coming back from tour and I was in my kitchen listening to Ludovico Euinadi, making some tea and toast and just feeling really hurt after coming back to find my husband really battling with depression and anxiety. I started singing about the way I was feeling and at the time I wasn’t trying to write for myself but just recorded this ‘feeling’ and sung words that were the subconscious emotion I was feeling, which became ‘I’ll Be There’. After taking it to my first session for my own music with HONNE, we worked on it and then  last year in lockdown I wrote the bridge. I was so frustrated and full of worry about my own life it all spilled out into that bridge as something I needed to say to myself as well as my husband. We all want someone to see us when we don’t feel enough, to just be there without giving answers or even words and I wrote I’ll Be There as that.

You wrote ‘Green Lights’ before everything went down last year, what did you want to say with the song then?

Greenlights started in what felt like a season of a personal crisis which felt out of my control but seemed to hit me from all sides of my life. I’d been carrying a lot of the mental health struggle that was going on in my family and at the time not many friends knew. I felt like there was a lot of pressure internally and externally and yet the demands for me to be ‘all ok’ felt the same and yet impossible. The song feels really timely for me right now because it came out of a time that was a similar makeup to what a lot of us have been going through in feeling overcome, trapped, confused or even scared during this pandemic. At the time it felt like some self talk to say that regardless of whether people around me see the tough bits, there is hope and it will get brighter.

How is it relevant now?

We’ve had so much time on our hands and with none of our usual life sources to energise us. We don’t have any of the natural hums of life giving us energy, we’ve been in one location, and I think we feel this heaviness for ourselves and the people around us  I also feel like with so much time for stillness a lot of us have had things coming up that we’ve then had to process whilst just coping with a pandemic, which in itself has been wild.

Greenlights is about speaking to that invisible stuff that’s going on in us individually and collectively and it’s that reminder that we’ve done hard things before, hard things will come to an end, we have hope and it’s only Green Lights for us.

Why did you start your Instagram series ‘Cuppa & A Natter’?

I started the series out of a place of curiosity I think. Experiencing supporting someone with their mental health, having my own doubts as to it I was that well, were the selfish moments ok, intrigue about how other people were and also struggling with imposter syndrome when I thought about pursuing my own project… It all made me curious to know other people’s life hacks. ‘Normal people’ are so extraordinary and we all want to know how normal people do extraordinary things and cope and flourish and deal with the ugly stuff too, so I wanted to ask questions about the sticky things of life from people who I really admired. I become more empathetic when I understand something and there’s so much that I don’t get and want to have greater empathy for, so it feels like a good place to start is the safety of a cuppa tea and some curiosity.

What is coming up next for you?

Ekkkkkk. Following this EP, there is more music (I AM SO FREAKIN GASSED FOR YOU TO HAR IT WAHHH). AND… my first live shows, I am sooo excited to be able to say I have my first headline shows this October firstly in my hometown, Nottingham on 27th October at Rough Trade and then 29th October at Colours, London! Hopefully there’ll be tea on tap, we can all sing and hug each other and life feels a little lighter!