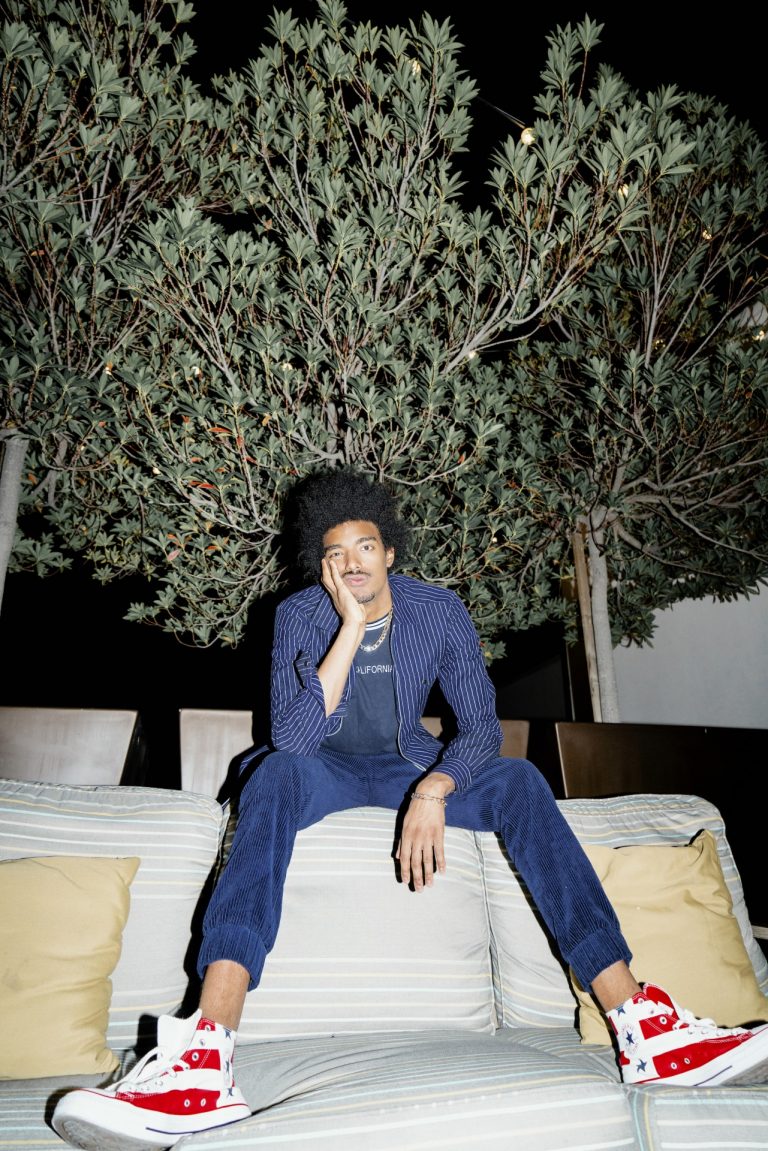 Three months into the pandemic, a 25-year-old Los Angeles resident Tai Verdes was one of the essential workers that would help you with your phone at the Verizon Wireless store. Today, Tai Verdes is an artist to watch with a viral hit, ‘Stuck In The Middle’ with over 42 million streams.

To be hailed by The New York Times for having one of the biggest songs of the year, Tai Verdes became a viral sensation, but the rising star refuses to be labeled a one-hit-wonder; he says it’s more of a ’10 album thing’.

Since the release of ‘Stuck In The Middle,’ Verdes put out equally smashing tracks’  Drugs’ and ‘Bad Bad News’. While finishing up his debut project, Noctis is keen to get to know who Tai Verdes is and how he’s feeling: “My day is absolutely beautiful. I’ve been finishing up my first album, and that shit is a doozy”.

As much as music was always a part of him, singing is a new craft that he is carefully polishing: “I was always pretty good at the piano because my mom signed me up for lessons for 12 years. But the singing is very new. I learned for six months for an hour and a half every day”, he reveals.

Listening to ‘Stuck In The Middle,’ Verdes’ effortless storytelling and spot-on lyrics suggest the artist has been doing this for a while. For some, more than others, the implications of the pandemic have encouraged people to commit to their passions more seriously. This applies to Tai Verdes’ career: “I just started taking it seriously in the spring of 2020—quarantine kind of pushed me even further into songwriting. The situation had a positive because I loved song writing anyway”, he speaks on his experience of songwriting.

His life before ‘Stuck In The Middle’ consisted of a nine to five routine as an essential worker while others were advised to stay home. Verdes elaborates on this experience: “I was slangin phones at Verizon; selling and managing a Verizon store. I never knew how many people didn’t know how to work their phones”.

Verdes shares his thought process behind ‘Stuck In The Middle’: “Pretty basic guy and a girl can’t decide what they want. Do we get married? Do we never see each other again? Do we cuddle tonight? Who knows.”

Being based in Los Angeles, the city where everyone comes to ‘make it’, as a rising musician, he discusses the inevitable lows that act as a natural selection process creating the real superstars: “The whole thing is a high for me because I love the process. But from the outside looking in, the whole thing was low except for recently. That’s the way it is supposed to be, though. If it was easy, everyone would be Ariana Grande or an Ed Sheeran. The lows are just there to weed out the people who don’t want it bad enough”.

Hoping to become friends with future collaborators, Verdes’ dream team would include this generation’s icons – Billie Eilish and Tyler The Creator. No surprise there, as his number one priority, is being real and genuine. He states: “Authenticity. Everyone could always use more of it”.

With his second release, ‘DRUGS’, Verdes stayed true to himself. When we asked what people should take away from the track, he brought up relatability: “Be honest with yourself as much as you can, and people will relate. Everyone has their own life, but we come together over relating to each other’s problems, and sometimes those problems are exactly identical, and we can learn from each other”.

The same goes for his most recent single ‘Bad Bad News’: “Authenticity again. I just wanted a track to show how I was feeling in a complete way—showing a rawness that I always love to have in my music”.

As an artist very new to the scene, already making a number of ‘artist to watch ‘lists, Tai Verdes does not shrink under pressure, not in the slightest. Quite the contrary, he perceives those platforms as fans, rightfully so: “No pressure at all really. It’s kinda like an audience that cheers you on just for being yourself. You don’t have to try too hard because they have already bought into you as a person”.

The one thing we will take away from this interview is that Tai Verdes is confident, very hungry, and very good with words. His outlook on this past year that may have caused misery to most of the planet is refreshingly uplifting. “I don’t think about the past like that. I think about how I can be happy now?” and think about that for a second.

“What about your debut project?” we ask. Verdes replies: “The debut album is coming soon. The project is my child, and I’m about to win parent of the year”.