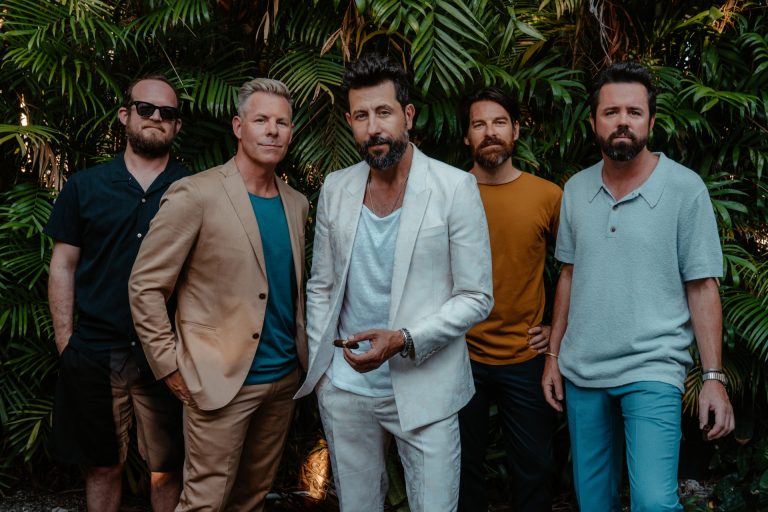 Nashville country band Old Dominion return with their fourth full-length album, ‘Time, Tequila & Therapy.’ A title that summarises what everyone should have a little more of in their lives. Time is always running out. All good stories start with ‘the night I drank tequila’ and therapy; let’s get rid of the stigma. Old Dominion is onto something here. No surprise for their Grammy nomination.

Whit, Trevor, Brad, Jeff and Matthew met at the crossroads of their separate musical journeys once they all moved to Nashville. As soon as they began writing songs, they knew it wasn’t a sprint but a marathon. At first, they were referred to as ‘the songwriters’, and Matthew, the singer, admits they ‘sounded like a band that was trying to make radio hits.’

During our chat with Old Dominion’s singer Matthew, he made it clear it wasn’t easy. However, now he’s proud to describe the band as ‘a living, breathing entity that writes its own songs.’ He shares more on their story and writing process.

Honoring the state of Virginia, Old Dominion is a reigning two-time ACM and CMA Vocal Group of the Year, with one billion on-demand streams. Old Dominion is back with an exceptional 13-track long project ‘Time, Tequila & Therapy’ with a leading single, ‘All I Know About Girls’. Please don’t sleep on them.

Could you give us an overview of Old Dominion and its members?

Collectively we’re five handsome dudes, who are good friends who really love playing music and writing songs. And we’ve been doing both of those things together for a really long time. And that’s our core, that’s us. That’s Old Dominion, Whit plays the drums and drinks the most beer. Trevor, he is the multi instrumentalist, and sleeps in odd places. Brad is the lead guitarist and he plays the most golf, he plays more golf than he plays guitar. Jeff is the bass player who’s really only in the band because of his hair. And now his moustache. And I’m just me, just Matthew the singer.

How did you come about forming a band?

We became a band almost accidentally. There was a lot of history. Some of us knew each other from childhood, some from college, and we all moved to Nashville separately to pursue music in different ways. We were writing music together and we were all pursuing different avenues of music at the same time, but we would play gigs together just to make a couple extra bucks not because we were trying to make it as a band just because we’re trying to showcase songs we had written. Or make 50 bucks here and there at a gig and eventually, we had done it so long that people started to tell us that we had a sound and we sounded like a band and the songwriting got better and we started to have songs that sounded like hits so at some point we said maybe we should name the band and try to go after it ourselves and that’s how we became Old Dominion.

Who came up with the band name?

At the time we were looking for something that was tied to Virginia, a lot of us are from Virginia, or have ties to it. We were trying to find a band name that somehow showed our roots a little bit and every single thing that we could come up with was taken already and Old Dominion is the nickname for the state of Virginia so it’s the Old Dominion state and I remember saying to the guys like, man the only thing I can find that isn’t taken is Old Dominion and everyone went that sounds cool to me. So that was super easy. Once we found that it was a super easy decision.

What was the hardest thing about getting recognized in the industry, and what helped you the most?

I think the hardest thing for us about getting recognized in the industry was the fact that we weren’t 18 years old. We were a little bit older and I think we had started to get a reputation around town of just being songwriters; “Oh those guys are good songwriters.” It was hard I think for people at the labels here to change their view of us as just being people behind the scenes to actually being the people that could be delivering the song so it was tough to get them to do that. But I think what eventually changed their minds was the fact that we just started to do it without a label. We made an album you know, we had this album that sounded fresh and it sounded like hit songs and then radio started to play it so at some point it just hit critical mass where one of the labels finally decided to take a chance on us.

How did you manage to deal with the hurdles of 2020?

Well, we made an album so that’s what we did. We couldn’t tour in 2020 so we circled the wagons and we wrote a bunch of songs and recorded them so that’s the best thing that we could think to do was to create so that’s how we handled it.

Do you remember how you found out you were nominated for a Grammy? What was your reaction?

I remember getting a text message from I believe, Shane McAnally I think was the first person who texted me and it was just one of those weird things that you’re like this can’t be real right? Like that’s not a real thing. We’re nominated for a Grammy? And then we all were on a text thread together. We’ve never been a band that has chased after awards or anything to hang our hat on we just, we want to make the best music we can and put on a great show and then you start getting recognized by things like that and the Grammys you watch on TV when you’re a kid, it’s extremely validating to make a piece of art that that gets recognized that way.

Can you tell us how you decided to call your new album ‘Time, Tequila and Therapy’?

We call the album Time, Tequila & Therapy because it’s a lyric from our song No Hard Feelings which is on the album. When you’re searching for an album title it’s a little bit more than just picking a title track you know we want something that sort of either represents us or represents the album or ideally both and this one seemed to sum it all up. It was very telling that we all agreed immediately that Time, Tequila, & Therapy was the right choice so that was an easy decision for us to make.

How does it stand out amongst your other projects?

Best album. I think it’s the most unique album yet and I think every album we sound more and more like a true band. In the beginning we sounded like Old Dominion but we sounded like a band that was trying to make radio hits which is great. But the longer it goes the more you can tell that it’s just this living, breathing entity that writes their own songs and records their own songs.

What does a writing session with Old Dominion look like?

How did you come to write ‘I was On a Boat That Day’?

I Was On A Boat That Day was a title that we had been kicking around from back in the Break Up With Him days. It fermented in the cask and then the bottle and then we finally opened that bottle eight years later down in Nashville and we finally ended up finding the right angle for the song. It was great and we had a little tequila and jammed it out a few times and there you have it.

Are any of your songs inspired by real life experiences?

Yes, I think all of our songs are inspired by real life experiences whether they are our own, our friends’, our families’. The only true way to capture people’s attention is to write about real things, at least in country music. I think that’s one of the best qualities of country music is it speaks true to life.

What is your favourite lyric from the new album?

I think it’s impossible to pick a favorite lyric, but the one that’s standing out to me right now I really like is “You don’t need no reason at all to call an old familiar more than a friend.” Oh, singing that too.
I like, “I’ve been filling up the ashtray with the bridges I burned.”

What is your favourite city to perform in?

Oh the cities. It’s tough to pick one because sometimes it’ll be the smallest town you’ve ever been to, but the crowd is amazing. I would say Chicago is definitely one. Minneapolis is another one. LA. Seattle, New York. Detroit.

Do you have a dream collaboration?

Personally, I would love to collaborate with Paul McCartney.