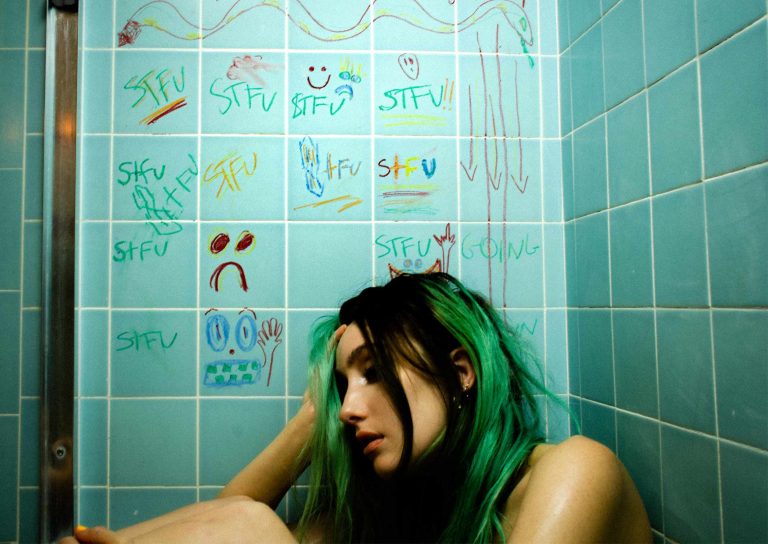 The Halloween Special With phem

Noctis Magazine is spending this year’s canceled Halloween with phem, the LA indie artist. As this year’s spooky season got a ‘stay at home’ order, the only monsters scaring us will be the ones in our heads. Sometimes, you won’t need a terrifying costume to haunt you. Sometimes, your own thoughts keep you up at night, and you need to tell them to stop as phem has done in her latest single ‘stfu’.

The timing of our guest of honor for this weekend is impeccable. Phem is taking part in a scripted Halloween musical podcast where rock legend Tommy Lee plays the Devil titled ‘Halloween In Hell’. It features original music and performances by phem’s friends like Machine Gun Kelly, Dana Dentata, iann dior, and 24kGoldn.

She speaks on meeting the CEO of the podcast production company Audio Up and why getting involved made sense: “I met Jared, and he showed me the project, and I fell in love with it. I think it’s hilarious and very different. A bunch of my friends was also a part of it, so it made sense. It’s been really fun to be a part of it”. You can listen to all episodes down below.

As a part of the podcast, phem joined forces with iam dior for a song in theme – ‘In Hell There’s Always Halloween’.

That is not it. In the spirit of having to DIY our own Halloween party, phem curated an exclusive playlist for us that will put you in the spooky mood. “October is hands down the best month of the year and also the movies and candy, DUH Reeses and candy corn”, phem says why she likes Halloween so much. Like everyone else, she came to terms with this year’s unconventional indoor celebrations. “I’m probably just going to carve some pumpkins with my friends in a couple of days and sit at home and watch movies?!” And if you’re looking for last-minute costume ideas, phem confesses her high school getup as a cardboard box was the best one yet.

For our Halloween playlist, phem picked out symbolic 13 songs, including her track ‘GRIM REAPER’ with Lil Tracy from her last year’s project ‘VACUMHEAD’ to start things off. It also features songs by $uicideBoy$, Crystal Castles, gabriel black, Lil Peep, Phoebe Bridgers, and the classics like Zombies by The Cranberries and Radiohead.

The first time I came across phem was on Machine Gun Kelly’s ‘Hotel Diablo’ album, specifically on the 13th track ‘5:3666’. One of the darkest tracks on the album, phem opens the track with a voice that is as empty as full of pain singing:

Some days, I feel like I let myself down,

I love my life, gonna run it in the ground,

Can’t sleep for days, got your name in my brain

Can’t sleep for days, gotta stay up, stay up forever

After looking at both of their’s social media accounts, it is fair to say phem and MGK are close. Phem tells us the story of how their epic friendship started: “We actually met in Indianapolis when I was on tour with Lil Xan at the end of 2018. His energy was crazy. I had never been around someone like that before. I thought to myself; I have to work with him at some point. I remember listening through to all his songs in the van after that. Then in January of 2019, I linked up with my friend Alex Lustig who was producing some stuff for him. We ended up making the hook to 5:3666, and Colson loved it. We also happened to live down the street from each other. Soooooo ya, just random serendipitous stuff! Welcome to my life”.

Looking at phem’s career, with every project or feature she’s done, her fans discover more about her while she grows and matures in front of us. For years, phem was a professional jazz drummer; she then moved on to songwriting for artists like G-Eazy and gnash. But it wasn’t until she recorded with the band Lipherma, when she realised, she has things to say. This urge to free her mind and thoughts made her go solo under phem.

‘stfu’ is the latest creation out of phem’s world, and it illustrates her everyday struggle to ignore her inner demons and live up to her personal legend. When we asked her to elaborate, phem used a song from her first project, ‘Don’t Kill Me’ as a reference.

“One of the first songs I ever released as phem’s was called ‘Blinders.’ I wrote it for myself. I never thought anybody would hear it, to be honest. It’s about keeping the blinders on, not looking around at other people, not comparing, just focusing on what you were sent here to do, and not being too judgemental of your creative instincts. When I do that, life is better. I also think it’s important to be around people who inspire you and lift you up. Find people who resonate on an even better frequency than you do. Find people who you can laugh around and have fun doing nothing with. Those are the important things”, phem advises on why to stay in your lane and to keep your circle small.

Her anticipated EP ‘how to stop hating urself pt.1’ had an initial release date for today, October 30th. In the process of explaining the inspiration behind the record, phem depicts why the EP is going to come out on December 4th.

“I’m convinced this project is a living breathing organism on its own. It’s steered the whole ship. Even though I thought I had it covered, including the release schedule. Originally the name was going to be something else, but through the process of mixing and finishing the songs (all during quartine/ corona times), I realized I was loathing myself, and the songs,  and the whole process.. I couldn’t shake it, so that became the title. The songs reflect different weaknesses, probably the rawest work I’ve created so far”, she reveals.

Mark your dates, guys, new phem material is coming. In the meantime, let’s enjoy this Halloween weekend with the help of her exclusive playlist. Thank you, phem, for curating it!