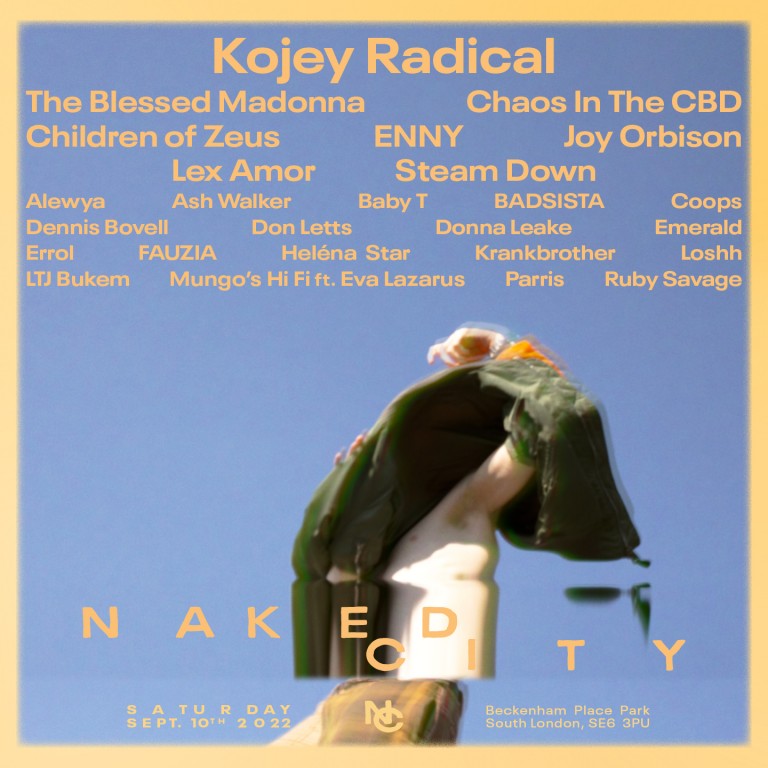 The Perfect End To A London Summer: Naked City Festival

There couldn’t be a more fitting end to a London summer with Naked City Festival returning to the idyllic setting of Beckenham Place Park on Saturday 10th September 2022. The all-dayer is produced and represented by the same team behind Krankbrother. Bringing an abundance of genres to the all-dayer, the festival focuses on jazz, afro, house, dub, and disco. Most importantly, it has an emphasis on supporting homegrown talent with over 80% of the acts on the bill based in the capital.

With a partnership with We Are Lewisham presented by Lewisham Council, Naked City provides a fresh perspective to the London festival circuit whilst remaining committed to booking a diverse line up and an equal gender split. It not only hones a space for established artists but also boasts the likes of rising singer-songwriters. The line-up includes Kojey Radical, Chaos In The CBD, The Blessed Madonna, Joy Orbison, Mungo’s Hi-Fi, ENNY and many more.

This year’s edition will have 5 stages located across the sprawling grasslands; the main Stage, Somethin’ Else, The Bunker, the Krankbrother stage and introducing their brand new stage – The Source.

Here’s 5 unmissable acts that will be playing this weekend:

And I say this – quite seriously and wholeheartedly. Kojey Radical is not unknown to the music scene especially in the UK’s rap world but it has taken him almost a decade to release his debut album. With an incredibly captivating sound laying in between jazz-led melodies and hip-hop and spoken word, his debut album ‘Reason To Smile,’ I believe would be an excellent discography to witness live. Especially on home turf. Check out his album now.

A South-London favourite, since 2020’s “Peng Black Girls” gave voice to black womens’ everyday lives and experiences, rapper Enny has found herself as a rising star in the UK scene. Her latest album ‘Under Twenty Five’ is a blend of relaxed and jazzy influences following by effortless flows drawing from old school grime. With collaborations with The Silhouettes Project and Shae Universe, Enny shows exceptional promise from an artist still so early in her career.

If you are looking for a boogie, you cannot miss the Mungo’s. The Mungo’s not only acquire the world’s finest soundsystem but in all sincerity, the UK reggae and dub scene would be hard to imagine without the Mungo’s Hi Fi. Hailing from Glasgow, you can expect bass-heavy sets and most probably an appearance from Eve Lazarus to belt out some numbers from their album “More Fyah.” Some of my favourite tunes include ‘Amsterdam,’ ‘Babylon Raid,’ ‘Jump Up Quickly.’

Lex Amor’s spotify bio reads – Artist. Producer. Solid babe. Can confirm that all of the above stands. North London-based, Lex Amor is more than just a rapper, producer and DJ. Working in and around the UK as a youth mentor and community organizer, her elegant self-composed flow complimented by her husky-modulated voice has garnered her much recognition on platforms such as COLORS and Boiler Room and features with artists such as Knucks, The Silhouettes Project, Kojey Radical. Her 2020 debut mixtape ‘Government Tropicana,’ is the most recent sample of her talent.

Ash Walker in my opinion is the perfect escape one needs in the chaos that one could experience at a day festival – providing a cosmic explosion of sound, colour, rhythm, shape and patterns as described on his website. His album ‘Aquamarine’ provides a sense of calm and tranquility in the form of a variety of groovy sounds and reverberations. ‘The Dagon’s Cashmere Jumper’ is one of my current favourites.

Tickets for Naked City Festival are still available – don’t miss out and grab yours now!