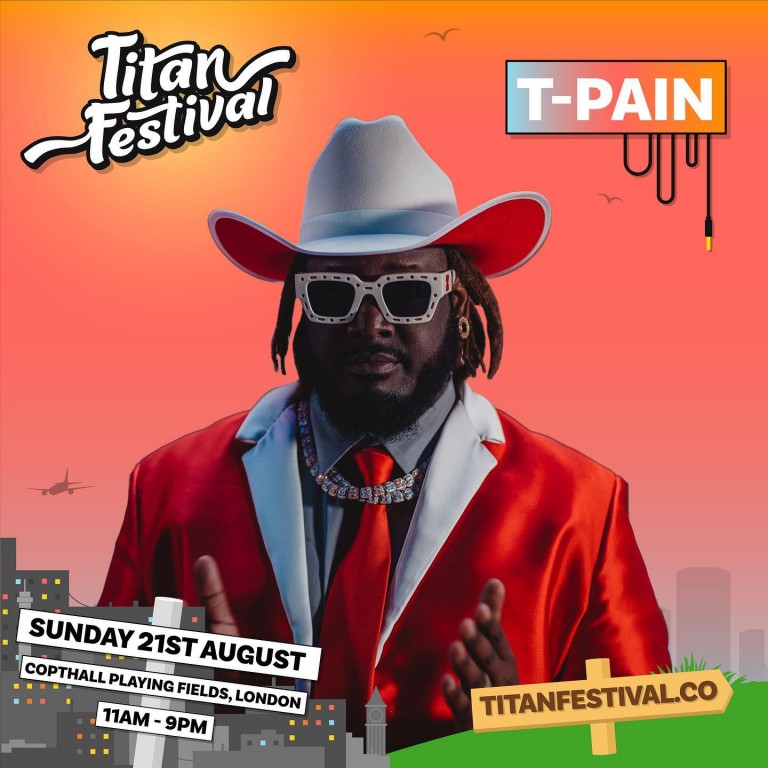 On Sunday 21st August 2022 (from the creators of the 51st Festival) Titan 2022 kicks off at the beautiful Copthall Playing Fields in North West London.

At this groundbreaking inaugural festival, Titan Festival bring you a fantastic debut event with artists and DJs representing party vibes from around the world across multiple music genres, stages, and tents, with an affordable multi-tiered ticket pricing structure; starting at only £30!

Titan 2022 are proud to announce a fantastic line-up of iconic Black Music legends on their main stage! This initial artist announcement includes 90’s & 00’s Hip-Hop & RnB stars from the USA, such as T-Pain, Lloyd, Bobby V, Jon B, J Holiday, Lumidee, Shontelle and Fatman Scoop, all on our main Titan 2022 stage! In addition, top DJs, including Kiss FM & ITV’s Shortee Blitz, DJ Charlesy, Larizzle, Scottie B, DJ Silk, DJ Longers, and many more with 70 amazing artists and DJs will be entertaining you across seven stages and tents with the main stage focusing on the headliners.

The multiple festival stages will deliver the best in underground sounds from Hip-Hop, Soca, Amapiano, and Afrobeat to emerging UK artists to Titan 2022! Starting off with their headline act, none other than Grammy Award-winning RnB legend T-Pain! The man responsible for certified Noughties dancefloor classics such as “I’m Sprung”, “Bartender”, and “I’m In Luv With A Stripper” will be hitting Titan 2022 this August; in his first UK shows in over five years!

Alongside T-Pain will be chart-topping US RnB singer and actor Lloyd. The award-winning star will be performing hits from his six studio albums, including their UK Top 5 smash “Dedication to My Ex (Miss That)” and “Southside” plus many more.

Also touching down on the Titan 2022 star-studded main stage, Naughties RnB singer Bobby V will perform his classics, including the UK top 5 hit single “Slow Down” and his Top 40 hits “Tell Me” and “Anonymous”. The critically-acclaimed RnB Singer-Songwriter Jon B will be alongside them, performing hits from his three platinum projects, including the RnB anthem “They Don’t Know”!

Other top stars gracing the Titan 2022 stage will be US RnB singer J Holiday who will perform his top 40 UK smash “Bed” and more! In addition, Lumidee will be performing an exclusive set at Titan 2022, performing hits, including the UK Top 5 “Never Leave You (Uh Oooh, Uh Oooh” and her Top 40 hit “Crazy”!

Keeping the throwback feel-good vibes going, Bajan RnB songstress Shontelle will also be at Titan 2022 performing all her hits, including the UK Top 10 smashes “T-Shirt” and “Impossible”. But that’s not all; last but not least, the international party rocker Fatman Scoop will be flying in from the US this summer to perform his UK #1 hit “Be Faithful”!

Alongside dozens of artists from around the world, some of the UK’s hottest underground DJs & promoters including Hip-Hop Brunch, Socaholics, Raindrop, Access All Areas, DJ Silk, Larizzle, DJ Longers, Chuckie & Tazer and many more will also be entertaining you all day long across seven action-packed stages at Titan 2022 this summer! Titan 2022 tickets are available from just £30 with the limited early bird ticket and are on sale nationwide on from Skiddle.

Look out for more updates to Titan 2022 over the coming weeks. Follow Titan on social media for regular updates on the first #Titan2022 festival via Twitter: @TitanFestivalUK and Instagram: @TitanFestivalUK