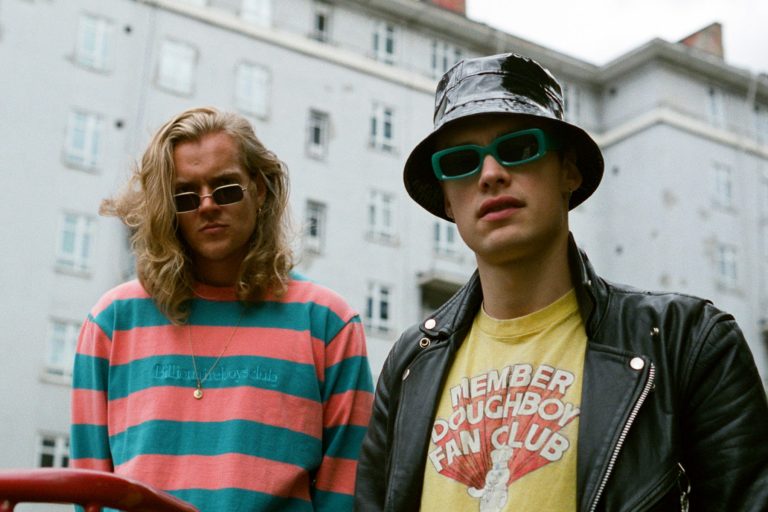 There is no shortage of charisma when it comes to London’s new duo Good Health Good Wealth. They are exciting, talented, good looking, good fun and to be honest, good would be an understatement when it comes to their timeless debut EP ‘Rich’. With a wealth of genres, stories and humour oozing out of each track, the boys aren’t wrong when they say there are no fillers in the 4 track EP. I sat down over zoom with the pair to discuss what’s next, lookalikes and the process behind the making of their music.

How did you first get into music?

Bruce:  For me it was in the car with my Dad – that’s when I first got in to music. Stuff like The Clash and Thin Lizzy.

Simon: Through my Dad too; after the Soviet Union there would be these semi legal underground/pirate CD markets. From childhood memories, I remember them looking a little like something from Mad Max or Blade Runner, with people smoking cigarettes, music everywhere, everyone trying to get bargains and exchanging stories. My Dad would give me like 10 quid and let me pick whatever I wanted, so yeah I think it started from there, a 6 year old me trying to score some hits! Haha

Bruce: You know what else, music channels! Trying to get Eiffel 65 on The Box.

What about making music, how did you first get into that?

Bruce: I started making beats on fruity when I was about 14, I guess from that I kinda learnt how to make a tune. Later on I met Fraser T. Smith when he did a talk at my uni, man’s made mega hits but I chatted to him after about Plan B which I think he kinda liked. I told him I was an actor as well for some reason [Laughing]. Anyway long story short he encouraged me to write a song and send it to him and that’s how I got started. I think people think of writing a song as this big thing, like its magic, but once you’ve written your first one you realise that it’s not that deep.

Who or what is your music most inspired by?

Simon: I wanna say this without being cheesy but it’s that age old subject, a boy and girl. A lot of our music comes from that.

Bruce: To be honest, it’s just life really init. People, different characters you’d meet down the pub. You can meet someone and have a 30 second conversation that sparks off a whole tune.

What about in terms of your own personal styles and how you dress?

Simon: I mean we’re broke [laughing], I guess we just wear what we can wear really and just try and make sure it doesn’t look toooooo bad.

Bruce: I literally just wear my Dad’s clothes. Almost the entirety of my wardrobe is my Dad’s. [Laughing] Other than maybe some Hawaiian shirts, Pete wouldn’t rock them.

Simon: My Dads massive, so I can’t do that.

Congratulations Your debut EP ‘Rich’ is out now! For anyone who hasn’t heard it yet – how would you describe it?

Bruce: It’s the introduction to Good Health Good Wealth. It’s giving you a taste of things to come. It’s quick, it’s ballsy, it’s in your face. There are no fillers in there. We just wanted to make a record that’s like bosh, have that, we’re here now and we exist. Now from here we can start the proper story you know what I mean?

Bruce: A lot of it was done separately, because it was done with Rich, Richard Archer, the producer. He’s the singer of Hard-FI. I’d go in and bring him a really shite early demo, we’d work out if was worth putting the time into and then Rich would sit there like a mad scientist and work it.

Simon: Then I’d come in and do a bit of recording, listen to it, send it back and forth and so on. The whole process took ages to be honest!

Bruce: I spent at least a grand on trains to Staines I think.

Well, it was worth it! My favourite track on the EP is ‘All I Want Is Everyone To Love Me’.

Simon: That’s my Dad’s favourite song. My Dad said that’s the strongest song on there.

Within that track there is lots of humour, is that something you want to continue in future releases?

Simon: We send memes to each other continuously throughout the day. We’re into funny shit. I think it’s important for things not to be too serious. [Laughing] You know we don’t wanna make a record that’s like, [well spoken voice] “this record is about the deep conflict with our blah blah blah”. You’ve gotta have fun, we still wanna say things that are important but I think all art has to have some humour.

Bruce: The message behind the songs has to be sincere, but also listener friendly. It’s fun on a surface level and if you dig into the lyrics there are some bits of gold in there.

Bruce, in the track you mention your lookalike; Fredrick Ferrier. Simon, do you have a lookalike?

Simon: Well when I was younger with the fucking fringe, the bangs and the long barnet.

Bruce: [Laughing] Recently we found out your lookalike is Quentin Tarantino.

Simon: Bruce also looks like that guy from that band?!

Bruce: Oh the McFly geezer? Yeah I get that a lot, and the wrestler Edge.

What’s next for Good Health Good Wealth? Are you already working on new music?

Simon: We finished the next set of tunes yesterday actually.

Bruce: Yeah those will be coming over the rest of the year. I think that will really cement the sound.

Bruce: Five tracks – quite poppy, quite hip-hoppy. I’m really, really excited to get that out to be honest with ya. Plus we’ve got a show booked for November at the Sebright Arms so keep your eyes peeled for tickets for that!

Three tracks and artists that you’re listening to right now?