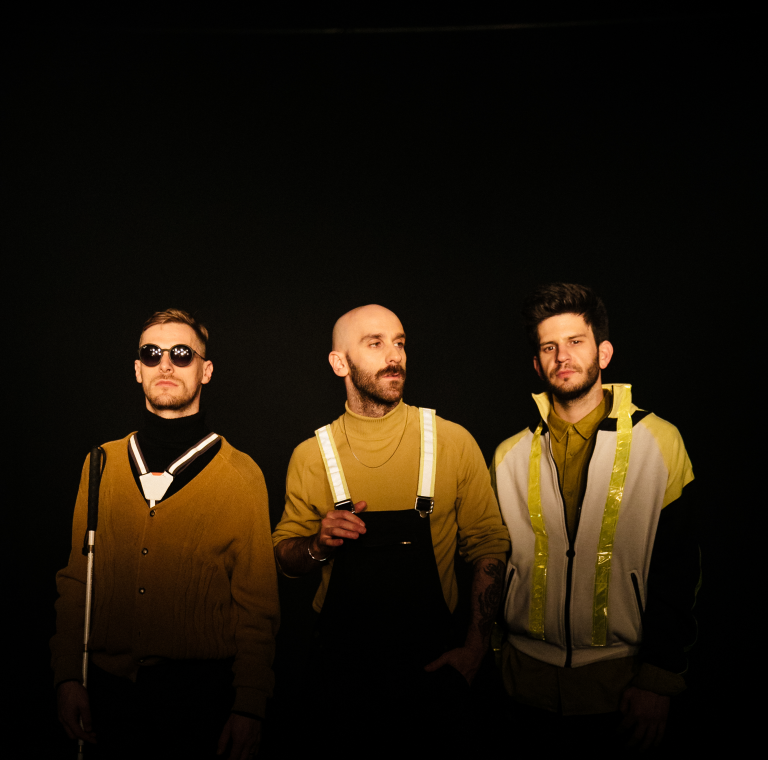 Walking through an empty venue is always surreal seeing it inanimate without the passionate fans singing along with their favorite band like X Ambassadors. I’m scanning the spaces at King’s Cross’ Scala knowing it will soon host an intimate show for up to 800 people. We all know how amazing small gigs are and the energy is irreplaceable. I’m about to enter the green room at Scala and meet Casey Harris, the keyboardist of X Ambassadors, a band he is sharing with his brother Sam, the lead vocalist and Adam, the drummer.

Sam and Casey were born and raised in Ithaca, New York, a city with people pronounced to be one of the kindest, most loving and accepting in the country. Ithaca has proved itself with raising a man like Casey. As soon as I walk up to him, his energy is infectious and welcoming, despite his jet leg as the band just flew in from Los Angeles. We sit down opposite each other and talk about how has this journey all began.

Two brothers, Sam and Casey, what drove the decision to form a band together, Casey replies with a smile: “We were both at the end of high school. We were in various bands. I didn’t really have a plan post-high school other than I was going to learn a vocation and go to work. I started playing with my brother in his band just casually at first, and then it eventually became a more serious thing. We realized we actually have fun playing music together. Sam had a plan to move to NYC with his band, so after I went to technical school, I moved to New York so I could rejoin the band and it went from there”.

“We met Adam pretty much the first week of being there; my brother went to the same college that he did, and he literally slipped a demo CD underneath his door because he heard Adam was a drummer and we needed a drummer. It’s been over ten to twelve years now I’ve lost track”, Casey clarifies and laughs proudly after realizing how far they have come.

It wouldn’t be a story about how a band got where it is today without day jobs they never dreamt of, but did it anyway, so they can save up and live their real dream and perform. “I went to a two-year programme to learn how to repair and rebuild and do all the piano stuff, so I could do pretty much everything or least I used to know pretty much anything when it comes to a piano. Then I moved to New York, and it was my day job while we struggled to get gigs throughout the city. Eventually, we finally saved up and bought a van and started doing gigs outside the city, and it grew organically from there”, Casey paints a picture of young X Ambassadors in the streets of New York City.

Speaking of the name X Ambassadors, it makes us wonder, how did three guys agree to a name like this one. Again, Casey laughs and explains the story: “We were just Ambassadors for a while, having a really hard time with coming up with a band name. We were looking all around our rehearsal room, naming objects and Adam, our drummer had a coated Ambassador drum head, so he suggested the name Ambassadors, and we hated it the least out of any of the names we’ve come across”.

He continues: “We stuck with Ambassadors for a while. Then we got signed to the label they basically told us you either have to change your name, or you will have to pay all the royalties to all the seven other bands who are already named Ambassadors. So we added the X to change it up, and it was a long long time arguing back and forth to come up with just that X. It made the most sense. It was about the aesthetics, my brother, he does all the artwork for the band, and he just liked the way it looked.”

Ever since the ‘Renegades’ video, we can see X Ambassadors as advocates for people with disabilities and are using their platform to raise awareness and tell people they can do whatever they want to do despite their disability. As I finish the sentence, Casey nods and talks about the response to the ‘Renegades’ video:

“It’s been amazing. I probably had more people come up to me and talk to me about that video than almost anything else we’ve done as a band. It’s almost really vindicating as well because at that time we just made that video because we were so impressed with these people and in ‘oh’ of what human bravery and persistence can do and to learn after the fact that it really meant so much to so many other people it’s really rewarding”.

However, he goes on by saying it wasn’t intentional to make a statement: “It wasn’t something we expected. We didn’t necessarily go into it trying to make a video that would reach so many people. We just made a video that spoke to us and the fact that it speaks to so many people really is humbling.”

The last album X Ambassadors released was ‘VHS’ back in 2016. Their next project ‘Orion’ is coming this June. Casey fills in the gap of three years and how they took their time to reach perfection: “This album is basically the third iteration of the album. We’ve been trying to make it for several years. We’ve written close to 50 songs altogether. We thought we were done twice before we were done then we realized it wasn’t what we were going for, scrapped it, wrote a new one, and so on.”

“We’ve written entirely 90% new album. We kept the best ideas from the first two. Hopefully, the third one is a charm, and we’re actually putting this one out in the world for people to see. It was a process of trial and error more than anything else writing as much material as possible just to see what the best stuff was and what direction we wanted to go with”, Casey reveals.

After listening to ‘Orion’ and looking back at ‘VHS’ and all the other singles, there is a common theme of vulnerability among the tracks. One of the X Ambassadors talents is their ability to write a record that will speak to people that need a pick me up.

Casey develops on the idea of vulnerability: “We’ve discovered this on VHS what songs really resonated with people were the most vulnerable, most personal. VHS was very much an album looking back at our lives, and Orion is an album looking at where we are now and where we’re going. That gives us a sort of vulnerability, we’re all like everyone else, we have no idea what the future holds, whether we are acting right and that’s what many songs are about. That’s also something we’ve realized is important in songwriting. If it is a vulnerable place you’re coming from  it is probably a good place to start from as far as a song goes.”

‘Orion’ is coming out on June 14th and Casey shares which song he is the most excited about for the fans to hear: “‘Hold You Down’ – it will be the third single we’ve put from the album. It is a very vulnerable song, all about being there for someone despite everything no matter what they’re going through”, until ‘Hold You Down’ is out, make sure to check out ‘Boom’ and ‘HEY CHILD’.

When it comes to performing, ‘Unsteady’ takes the first place: “‘Unsteady’ – is a softer song.  You can really hear the crowd. It’s so beautiful. At almost every show the crowd is so loud and passionate; it’s amazing to be able to play along with the audience like that on a song like that it always means the most to me”, Casey picks.

The list of collaborators is quite astonishing featuring names like Eminem, Imagine Dragons, Machine Gun Kelly. Although it is called collaboration, Casey unveils in modern days; everything is done remotely via email: “Most of them were done completely through email and electronically. Never met Eminem, never Skyped with him. My brother’s met Machine Gun Kelly when they worked together on the track ‘Home’. The only people we actually worked with face to face are Imagine Dragons. We have a long history with them. They were the one who got us signed originally. We’ve done several collaborations with them in the studio.”

The most recent collaboration of X Ambassadors is featured on the Game Of Thrones soundtrack. The executive producer of ‘Orion’, Ricky Reed, worked on the soundtrack as well. Sam has co-written around eight songs out of the whole album, with ‘Baptize Me’ has the X Ambassadors touch.

As we are about to wrap up, Casey has a message for all the X Ambassadors fans: “I would love the fans to take away a feeling of love and inclusion and safety. Our shows are supposed to be safe spaces where anyone can feel comfortable and be whoever they are, no matter what that is. It is really important to us that people feel comfortable to be who they are and they don’t need to hide that and try to be someone else.”

“In our concerts we want everyone in the audience to feel like they are part of it, they are part of the show, they are a part of a community, part of the concert. I hope our music represents that, I hope our music represents inclusion represents the fact that everyone feels the same feelings and experience similar experiences and really everyone is the same when it comes down to it”, Casey lays down the ethos of inclusivity the band swears by.