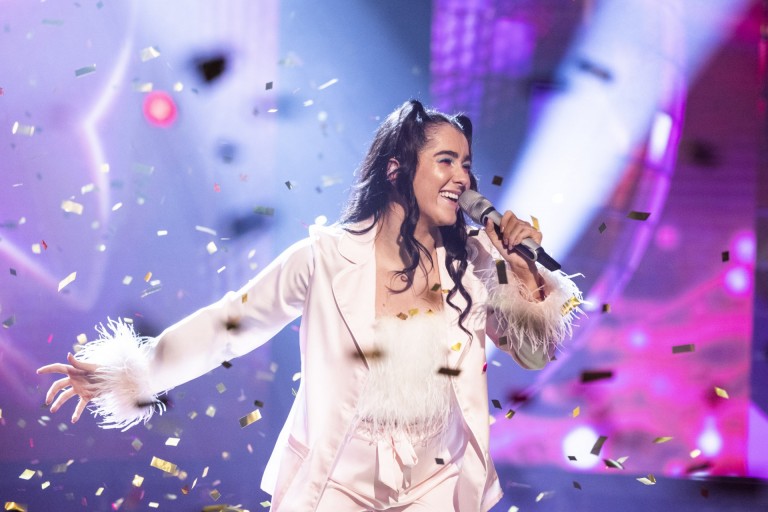 Irish alt pop sensation Brooke is certainly making a name for herself this year, having won the spot to represent Ireland in this year’s Eurovision Song Contest. Having first made her claim for fame as a finalist on The Voice UK 2020, where audiences went wild for her duet with Ella Eyre, Brooke instantly fell into the category of strong, powerhouse female vocalists, which was further propelled by her mentor on the show, Meghan Trainor.

Her latest single ‘That’s Rich‘ is coated with a Debbie Harry boldness, as the Irish artist sings about refusing to settle for anything less than you’re worth. Erupting with attitude and badass femininity, Brooke’s roaring vocals soar atop colourful melodies and vibrant beats.

We spoke with Brooke ahead of the Eurovision Song Contest, uncovering more behind the singer, her journey into music and plans for this year and beyond!

Hey Brooke! Congratulations on your new single ‘That’s Rich’. Can you talk us through your inspiration behind the track?

The music is inspired by Blondie, meets The Gossip but for 2022! Oddly, when we first heard The Weeknd’s Take My Breath – we noticed a similarity in the Track which was interesting. It was one of the first songs I’d ever written, which is cool, fun fact is the songwriter I co-wrote with – Karl Zine, also had written a song for the Eurovision Movie with Will Ferrell! The ‘Punk’ element really came to life when I went to London after the first Lockdown and we were inspired by the gritty vibe of the city, which I think comes through with the live instruments we used.

How did you first get into music? Did you have any significant musical influences growing up?

I’ve always loved to sing, but as far as my journey it kind of happened by accident, a friend of mine signed me up to audition on The Voice – never did I think I’d actually make it through to the filming rounds let alone the Final.

You’ve achieved so much already, getting to the final of The Voice UK. Can you sum up your experience on the show?

I learnt so much from my time on The Voice, from everyone including the Vocal Coaches, Meghan Trainor and people I met along the way and have reached out their help and support like Ella Eyre who were so gracious and kind with their time, it’s really been a big help to me in terms of even navigating working in a TV Studio to various skills and tips I’ve taken with me in how to perform and look after my voice.

You’ve already worked alongside some great artists like Meghan Trainor and Ella Eyre while on The Voice UK. In terms of collaborations, is there anyone in particular you’re dying to work with?

John Mayer – I am obsessed with that man! I’d also love the chance to write with Meghan Trainor – she shared something her Father was tells her to remember you’re not one ‘of’ a million, but one ‘in’ a million, which I guess means to not doubt your ability, which I believe being Irish you are often feel like this kind of lifestyle is unattainable, so that’s what I hope to show people is that you can dream big in Ireland.

You’re representing Ireland in the Eurovision Song Contest which is super cool! How did it feel when you got the call?

I’m a huge Eurovision fan and our family and friends have hosted ‘Watch Parties’ for as long as we can remember, I am a genuine fan of the songs, Alexander Ryback ‘Fairytale,’ is probably my favourite, but in Amsterdam Loreen who won with ‘Euphoria’ performed, and that was pretty epic.

I’m trying to be present in the moment and take it all in. This is a once in a lifetime opportunity and I want to be able to remember it forever, so all the promotional Concerts we’ve been doing across Europe so far are flying in, and it’s going so fast already, Eurovision is going to be over in a flash. I’m lucky we’re a really close team so we all get on so well and it feels like you’re sharing a special moment in each of our lives together.

You have done lots of live performances, especially with being on The Voice UK. Do you have a certain ritual you do to get you in the zone or hyped up before a live performance?

Myself and the Dancers are so close, the theme of ‘That’s Rich’ is also very ‘Girl Power’ – so before we go on we do our stretches and then our chant which is a line from the song, ‘You see me, now you want me?!’

Finally, have you got any plans lined up after the Eurovision Song Contest? Can we expect to hear some new music?

I have a whole EP sitting ready to go – I’m hoping my next single will come out right after Eurovision, it’s a Summer song so the timing is perfect! I just hope this is only the beginning…